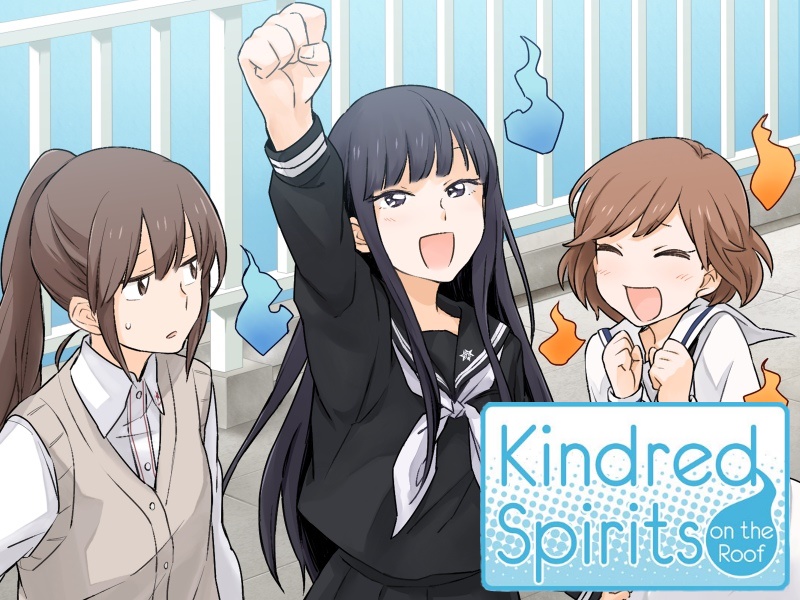 It seems like visual novels always come with a lot of baggage. You’re often overwhelmed with complex storylines, intense emotional trauma, or overblown melodrama. When you want something light, moege aggressively blasts you with its cuteness and sex appeal, staging an all-out assault on your heart from the get-go. Even the very structure of these games can saddle you with stress; which girl will you choose, which choices will please her? Although we will often happily accept this baggage, sometimes we need a break from it all. Kindred Spirits on the Roof is a rare variety of VN that expects nothing from you, gently enveloping you in its warmth and giving you the freedom to bask in its comfort for as long as you need. And it’s kind of amazing for it.

Kindred Spirits primarily follows Toomi Yuna, a second year student at an all-girls high school who has grown oddly distant, preferring to eat lunch alone on the school roof rather than with her friends. It is here she has a fateful encounter with two ghosts, the mischievous Megumi and the mature senpai Sachi. These two “kindred spirits” are girls who died in separate incidents decades ago and fell in love with each other after death. But there’s a problem, neither know how to physically express their love. Their plan? To turn the school into a “yuritopia” where they can spy on and learn from other couples doing the dirty! You following? Good, because due to the ghosts’ inability to affect the physical world due to their incorporeal forms, it’s up to Yuna to step in and make this all happen after she’s roped into their scheme.

If this sounds ridiculous, that’s because it is. And if it sounds overly skeevy or sex-driven, it’s not, not even a little.  If what you want out of yuri is endless CGs of cute girls blushing, making out, and scissoring, you won’t find that here. In fact, it may be over ten hours before you witness the first kiss, and several  more hours before the second, with a little hugging and hand-holding in between. What Kindred Spirits does offer is a heartfelt story of personal growth and unlikely romance, more earnest and pure than almost any other yuri VN. The characters find themselves in situations and relationships they struggle to understand. They must bumble along an unfamiliar road no one ever prepared them for, second-guessing themselves every step along the way. The VN’s ludicrous premise brings levity to the entire process, and the story perfectly threads the needle between the introspection and light-hearted atmosphere. 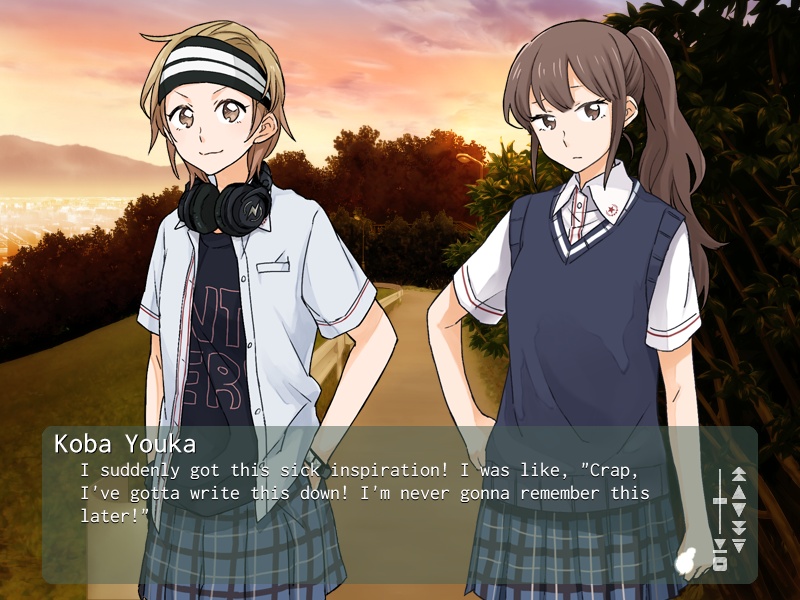 The format of the VN is rather unusual. It’s a linear story, but follows the storylines of five different couples. These storylines run concurrently, and only occasionally intersect. They handle this intelligently, as you observe these relationships through Yuna’s perspective as she’s supporting their love from the shadows. For a story that follows so many different timelines, it’s surprisingly well-paced. They stagger the introductions to prevent it all from becoming overwhelming, and allow some couples to take a back seat at well-timed moments in order to focus on what’s really important. At the end of each in-game month, the VN pulls back a bit and allows you to view that month’s events from the other characters’ perspectives. Sometimes you’ll get the same scene from another viewpoint, which I occasionally found a bit tedious, but most of the time you’re getting entirely new scenes that give context to the events that have just transpired. The separation of these scenes from the main storyline helps prevent the whole ordeal from being overwhelming, and provides a nice change of pace.

This would all fall apart in a hurry with a weak cast, but fortunately Kindred Spirits delivers on that front. The characters are all pretty great, I couldn’t find it in myself to dislike a single one. They’re all charming with unique, interesting personalities. And the couples they form often have great relationship dynamics, such as the track team captain and vice-captain who are often seen having petty disputes but are clearly deeply in love, or the student who loves cute things and practically treats her youthful teacher like a doll when her adoration suddenly turns into something deeper. But my favorite couple is easily the rock-obsessed truant Youka who suddenly finds herself lovestruck by the strict discipline committee member Aki. You’re usually not granted a deep emotional investment in each relationship, but instead are acting almost as a voyeur. Or perhaps you’re assuming the role of the ghosts, gently and happily watching over your yuri wards as their love blossoms. This avoids the emotional roller coaster typical of romance VNs, but you’ll still cherish each character and the time you spend observing their stories. 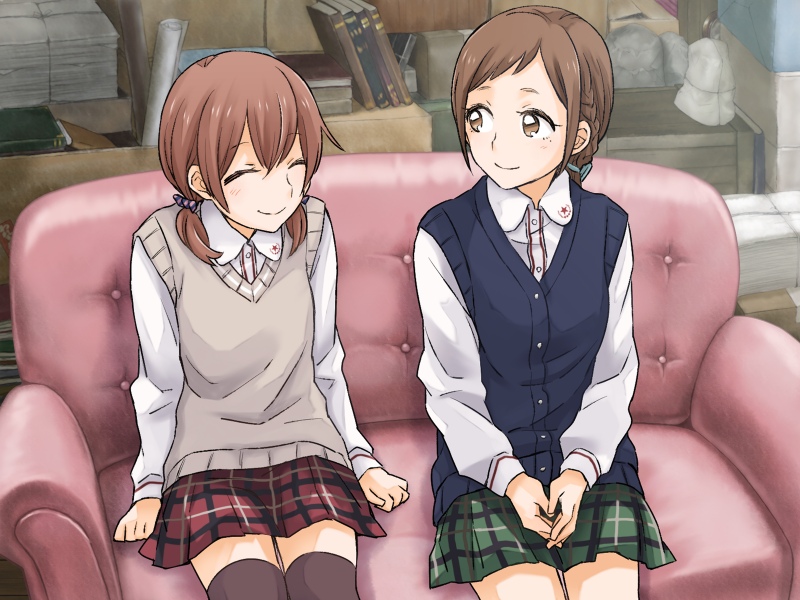 While there is practically no ecchi or fanservice, there are sex scenes. These scenes are all quite tame and if not for their length they’d make the cut in a PG-13 movie. They still felt somewhat out of place, like the developers were just filling a requirement in a checklist somewhere. And once all of the relationships started progressing into a sexual direction, they started throwing them at you one after the other. One of the consequences of developing multiple relationships in parallel, I suppose. I’m glad they found a way to do these scenes tastefully, but I question whether they were necessary at all.

The art supports the tone and atmosphere of the story very well. The characters are drawn in a simple but clean art style that reflects the straightforward approach of the VN’s subject matter. There’s no constant parade of blushing maidens or overly cutesy character designs here. Each character is well-designed and given a unique look, something many much-higher-budget visual novels often struggle with. If there’s one complaint I have, it’s that there aren’t enough CGs. It’s a typical Liar-soft problem that manifests yet again, I’d like to see more of the eventful scenes portrayed directly in the art. The voicework and music also betrays Kindred Spirits‘ limited budget. Only a handful of select scenes are voiced, and while the music that is there is great and perfectly upholds the cheery atmosphere, the number of tracks present is very limited. I will say that when faced with the decision between quality and quantity, I’m glad they went with quality.

Kindred Spirits is a cheery and upbeat look at lesbian relationships that is neither idealistic nor pessimistic, neither overly serious nor mindless, and it doesn’t pander or feel exploitative. They find a perfect middle ground that allows you to throw away all of your worries and absorb yourself in their world. It’s the exact kind of comfortable and relaxing visual novel I never knew I needed. It will last you a decent chunk of time (it took me somewhere around 25 hours to finish), and I found it a thoroughly enjoyable experience the whole way through. I may not have been a big yuri fan before, but I can feel myself now getting pulled in that direction. One thing’s for certain, Kindred Spirits on the Roof is my new favorite work of yuri fiction.

Pick up your copy of Kindred Spirits on the Roof here! | VNDB

Want a second opinion? Check out our other review from Tyrael here!

+ Well-written with great characters and a good sense of humor.

+ A low-stress and very relaxing read.

+ A frank look at lesbian relationships, feeling neither exploitative nor preachy.

- Not fully voiced. Some of the characters reuse voice actresses, and the performances can feel a little forced with them.

- It felt like the story was starting to spin its wheels a little towards the end.