I love tales about gods living amongst humans. There is something about the irreconcilability of the eternal and the perishable that appeals to me a lot – they are always epic in their proportions, yet homely in their meaning. Millia ~The Ending~ is one such tale, tackling themes that range from the most desperate but fleeting first love, to an equally desperate, but everlasting revenge. As Rize, the protagonist, you have to choose between the world and a person. How successful Millia ~The Ending~ is at telling a tale of gods and humans depends, then, on how difficult of a choice it makes it for you. 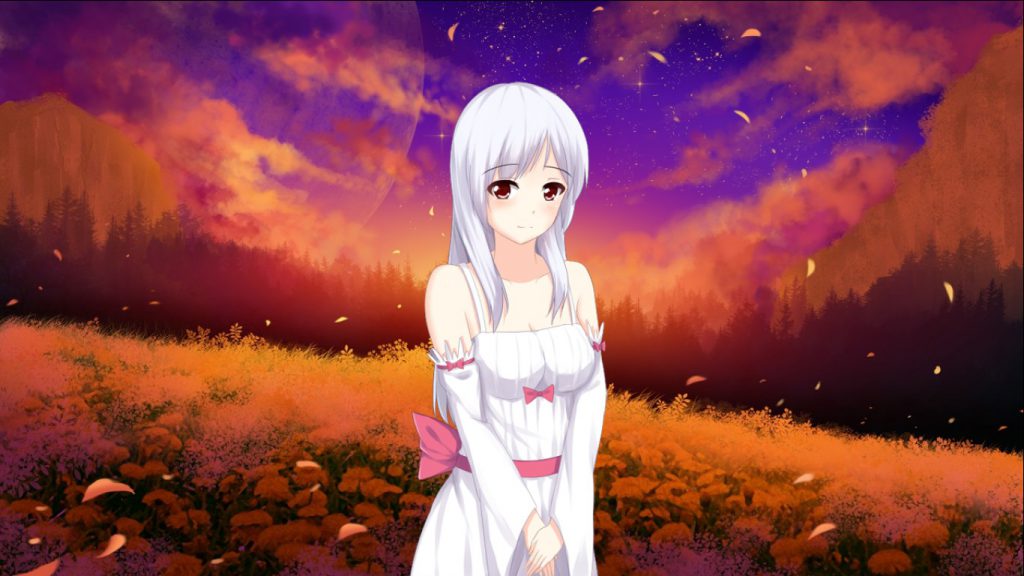 The very first second after launching the game will make you suspect that maybe Milliasoft forgot to take care of something – there is absolutely no subtlety to how the title screen appears. No logos, no fade-in to the music or to the screen. As you click on the Start button, the suspicion is confirmed: you’re unceremoniously thrown into the black-and-white prologue, which features a little boy asking a little girl if she’ll disappear. This abruptness is very jarring and incredibly important in a game that should rely on its atmosphere to deliver its emotional impact. From the start, the story clearly tells you you’ll have to choose between the world and its goddess, Millia – however, how are you supposed to feel and care for the world if you’ll be constantly seeing it through the veil of unpolished transitions and presentation?

As the story goes on, you’ll meet the other two heroines of the game – Meru, Rize’s little sister, and Serina, their childhood friend. Rize inherited the job to protect Goddess Millia until her sacrificial ceremony from his father, which will in turn protect the world from the curse of Goddess Hedria for the next decades until Millia reincarnates and has to go through the ceremony again. However, Millia lives in an already well-guarded palace and is adored by everyone, making Rize’s job pretty uneventful. Thus, he spends his days hanging out with his Goddess, his sister, and his childhood friend. However, the sacrificial ceremony is approaching and Rize makes a decision not to let it happen, instead vowing to find a way to free the world from the curse while keeping Millia alive. 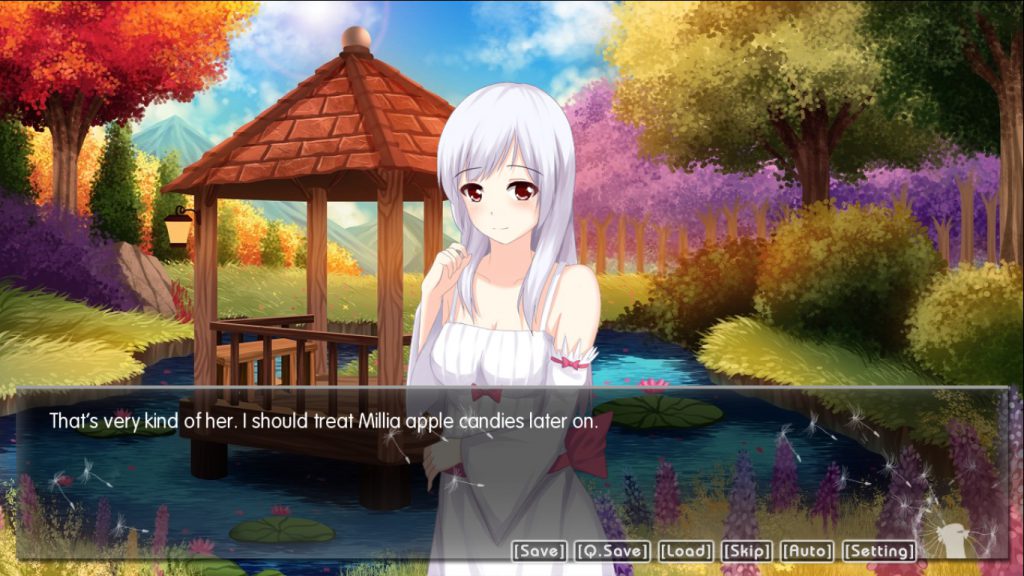 The curse was placed upon the world by Hedria, the other Goddess, after having her lover killed by an Emperor two centuries before. It manifests itself as some sort of disease that inflicts an enormous amount of pain in those afflicted by it – and anyone, at any time, may contract it – eventually killing the person. Rize’s father was one of the curse’s victims, but he died having taught his son everything he needed to know in order to be Millia’s guardian. What is interesting about the curse is its origin: it spells doom for those who thinks anything good will come out of love between a Goddess and a mortal, yet the story insistently points in this very direction. So you’re effectively left doubting how much you really want to see this happen. This is further aggravated by how often the game switches its perspective – we’re shown the internal monologues of Rize and all heroines at some point, which gives us information that makes us further question if Rize is doing the right thing after all. This makes for a very nice setup in which you have all the information you need before you make the first choice – and this, in turn, makes you perfectly conscious of the consequences of every choice. And it’s cruel, because you know exactly what you will leave behind each time. 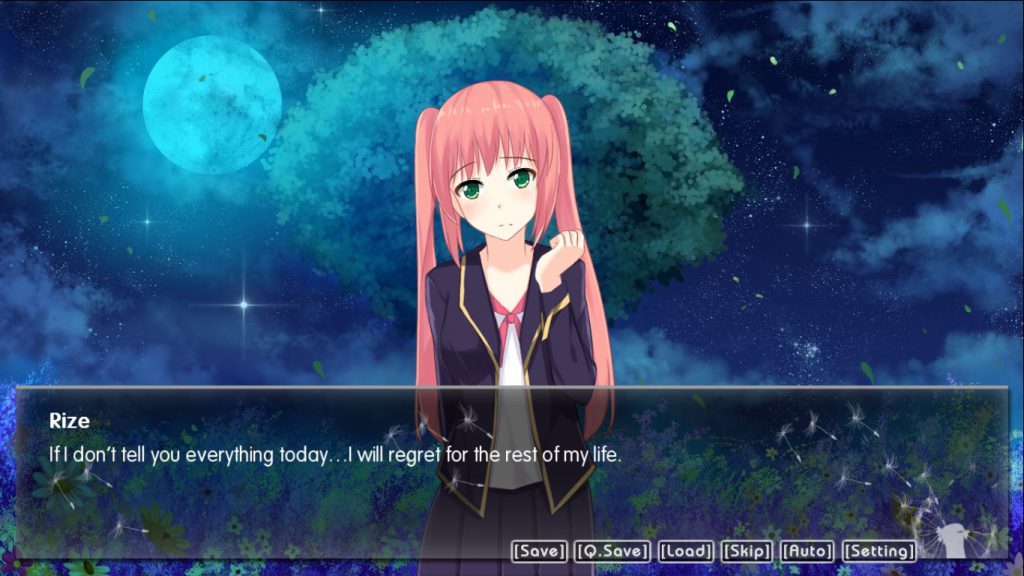 This arrangement somewhat makes up for the lack of a convincing atmosphere: instead of choosing between Millia and the world, since the latter is poorly characterized and barely shown to you, you choose between concrete and (the good kind of) predictable problems related to people the protagonist cares deeply about even if you don’t. 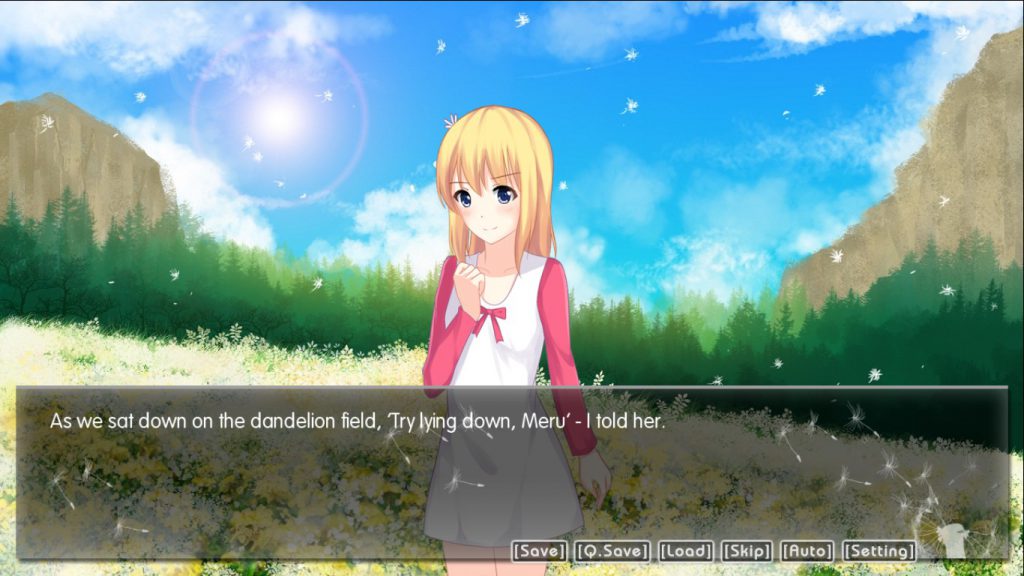 But even if this is a good plot, it’s lackadaisically written. There are quite a lot of English mistakes and most textboxes have only one sentence, which is also troubling – but above all, the writing doesn’t help you care about the characters or the setting. We are told that Rize knows advanced magic, but we’re never shown or told what this magic can do, what it’s based on, and what its limitations are – and these should be extremely important, since world-building is intimately related to character-building when it comes to Gods. As in, we never get to know what kind of Goddess Millia is because we don’t get to understand the world she takes care of. It’s like seeing a storm brewing on the ocean when you’re on a desert. Beautiful backgrounds are not enough to make you appreciate Millia’s world and, by corollary, Millia herself.

It’s not as if the foundation for a good visual novel is not there, but Millia ~The Ending~ needed a lot more work on the little things that make all the difference. What the placement of branching points and handling of information can do by themselves in the game is admirable, but not enough to tell a good tale of Gods and humans.

Get Millia ~The Ending~on Steam!