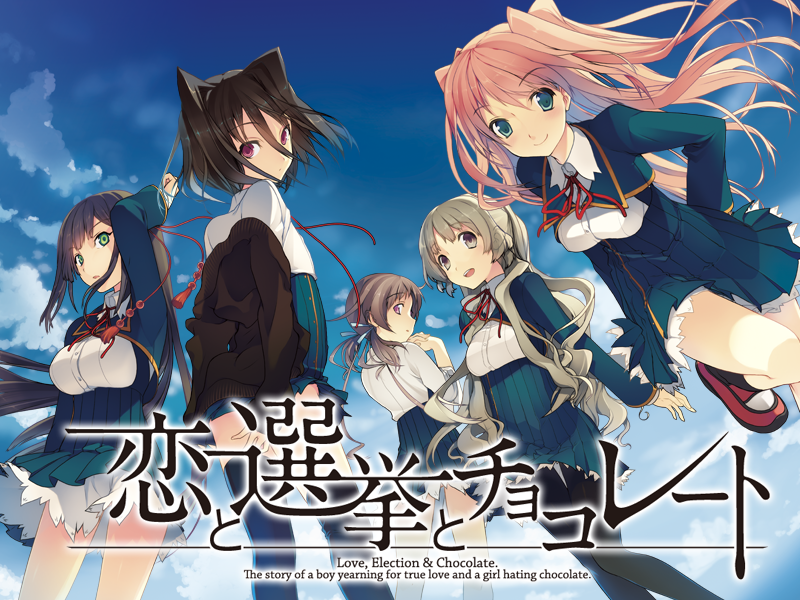 A late 2010 release from Sprite on the PC and later released for the PSP in 2012, Koi to Senkyo to Chocolate or “Love, Election, and Chocolate” in English, is an emotional romance visual novel worth checking out for many reasons. Let’s get right to it. The story follows the life of high school student Yuuki Oojima (but don’t call him Ooshima!) and his friends in the Food Research Club, or “Shokken.” They may be called the Food Research Club, but in reality all they do is bum around the club room eating various snacks and chit-chatting. We get to know Yuuki along with his childhood friend, Chisato, as they and the rest of the Shokken get into various shenanigans. 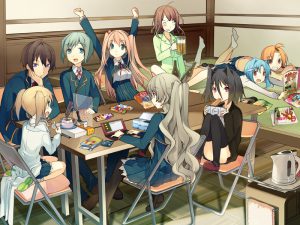 The Shokken doing what they do best.

We learn that the student council president elections are coming up, and the candidates are starting to talk about how they plan to change and improve the school. Satsuki Shinonome, the frontrunner for the elections, has announced that clubs which produce little to no actual activity will receive budget cuts or will be disbanded. When the Shokken gets targeted, the group bands together to run against her in the election with Yuuki as the candidate. 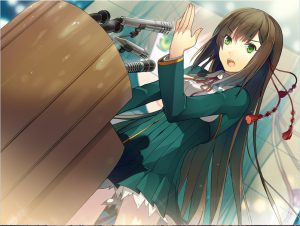 I instantly liked the idea behind the plot. It’s deceptively simple, just a school election and some club business. There’s a lot more depth than you’d expect and that kind of story really catches my interest. I found it difficult to tear myself away from reading even during everyday school scenes. Anyway, let’s get into the finer details. I’ll start with talking about my impressions on the characters/routes a bit. This visual novel, along with a good number of others, has what’s referred to as a central heroine. They have the most screen time and are usually considered canon.  That being said, if you as a reader dislike the central heroine, your overall impression of the story will likely drop. Chisato has a great route and her story felt very fulfilling to complete. I believe her presence in the others’ stories added an extra metaphorical hurdle to get over. It certainly made things a lot more dramatic and emotional, and I enjoyed that. The routes are all well-written and have touching stories that will tug at your heartstrings as well as make you smile. Filled with troubled pasts, forgotten memories, and some hilarious nonsense, this cast is sure to keep you interested. I award my personal “best route” to Mifuyu, the childhood friend pair’s mutual friend they met in school. I won’t spoil anything, but the storytelling and drama in her route is certainly worth mentioning. It really does a good job of depicting inner turmoil and tests the friendship the three share with a good old-fashioned love triangle. 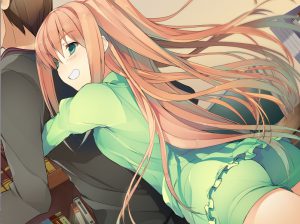 Chisato being her usual troublesome self.

Now, without further ado, let’s talk visuals. This game’s artwork is simply stellar. It has a unique feel to it that sets it apart from the other visual novels I’ve read, most notably the character sprites. I felt the style matched the vibe the VN was trying to give off very well, which helped add to the immersion. I particularly liked the very slick and clean backgrounds for the club room and the gymnasium. 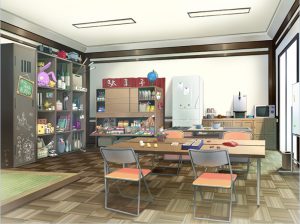 Moving right along to the music. As I’ve said before, music plays a large part in how I rate a VN.  Much like the artwork, it matched the atmosphere quite well, with lighthearted tracks that fit in well as background music for when the characters are hanging out, which is quite often. Although not the most incredible or memorable, I felt it does what it’s supposed to do and has a couple of catchy tunes. One last thing I feel is worth mentioning is the fact that unlike other titles I’ve read, this visual novel doesn’t allow access to the extras (being the CGs/BGM/Scene replay) until you’ve 100% completed the game. I honestly thought I wouldn’t like that at first, but it feels very rewarding after experiencing a good story to have all the memories wrapped up nicely.

All in all, I liked this visual novel a lot. If you’re a fan of the standard romance story, with emotional twists and turns, then this one is definitely for you. Whether you’re in it for the love, the election, or the chocolate, you’ll definitely not regret reading this one.

- Can tend to drag scenes out.

- Opinion of game dictated by one heroine.

- Music could use more varierty.