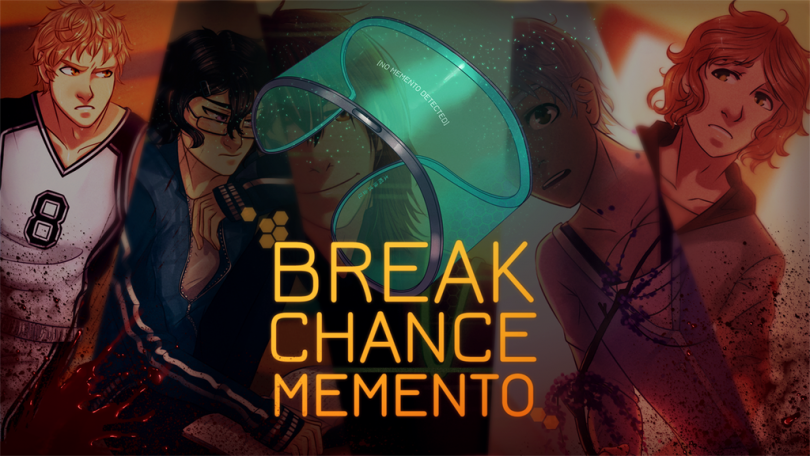 Do you have siblings? There’s something rather unique about this unwritten contract that compels brothers and sisters to always have each other on their respective minds, no matter how much legitimate hate there might be between them, right? Siblings may or may not be friends, but not even a hundred years of friendship can form a bond like that of siblings. Yet despite, or perhaps due to the amount of nuance there is to this kind of relationship, it’s kind of hard – at least when it comes to visual novels – to come across a relatable depiction of what it’s like to have someone you are almost forced to know a lot about, yet who may be completely mysterious to you.

Harder still is to find a work of fiction that talks about what it’s like to lose such irreplaceable people. 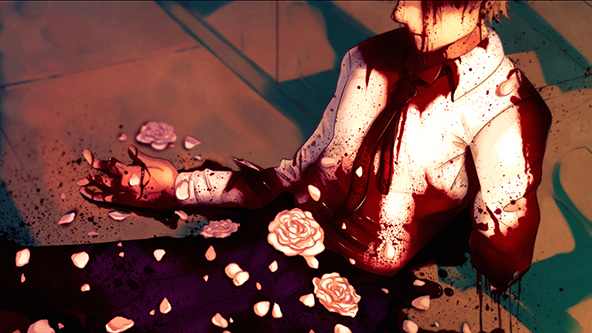 Before I continue, allow me to express some of my thoughts on time travel. It’s hard to determine whether it is more interesting as a philosophical, scientific, or literary problem. To write about it is to risk giving your reader the frustration of nullifying the experiences they’ve had and risk inflicting upon yourself the horror of having to rewrite an entire universe because of a missing or conflicting link between two events. This might be why most time travel stories tend to have, well, time and its implications as their main theme. Think of Butterfly Effect, Steins;Gate, and that Fairly OddParents special in which Future Timmy is a cool guy and… well. In any case, this is not what Break Chance Memento does. Cyanide Tea took on a difficult task: to talk about time travel without making it the main subject of their story. Rather, the game uses time travel as a means to give cues to the player so they can know other characters better and choose how to develop Shuuki, the protagonist.

The story behind the names of Shuuki and his brothers, Natsume and Masaharu, is a most interesting one. See, they were named after the four seasons – “natsu” means summer, “haru” means spring, “fuyu” means winter and “aki” means autumn. Fuyuka, Shuuki’s twin sister, died in an accident four years prior to the events of Break Chance Memento – the parents blamed Natsume, who was with her when it happened, and consequently the family was torn apart.

One can only imagine how painful it is for Shuuki to learn that Masaharu has just been murdered, out of the blue. 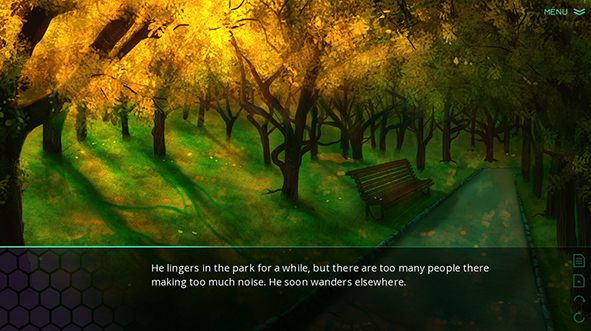 However, right after that, a man in a rather unfashionable suit who asks to be called Kyousuke approaches Shuuki and offers him a wristband that will allow him to save his brother – and potentially other people- through time travel.
The mechanism is as follows: once an object becomes too strongly attached to a specific time and place, it becomes a memento and, as such, the wristband can scan it and take its wearer there. It has two modes – Active Mode allows Shuuki to interfere in the scene, but the time he spends in the past is lost in the present. In other words, if he spends one hour in the past, he’ll come back to the present one hour after the moment he launched the memento. Stealth Mode is the opposite – Shuuki can only watch, but there are no time penalties for him in the present.

From here, Break Chance Memento could have developed either as an adventure-oriented murder mystery, allowing the player full freedom of choice between using or not using the device at any time and hiding mementos anywhere; or as a story-oriented family and personal drama, allocating the use of time travel to specific segments and treating choice and consequence separately in order to have more control over the characters’ interactions and developments. Cyanide Tea clearly opted for the latter, making use of time travel more as a narrative choice system and less as an overarching puzzle. 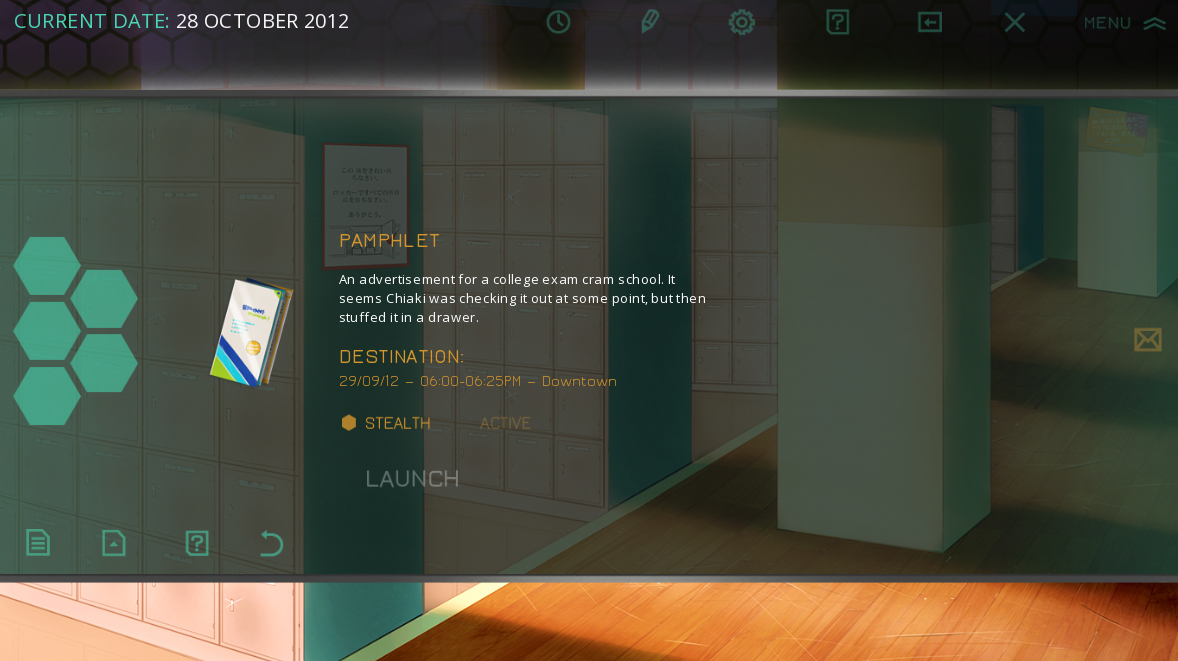 The game clearly tells you it’ll go easy on you – there are specific segments for you to search and use mementos, and they are highlighted so as not to bore you by having you click on every single object you see. Thus, you are free from always having to look out for objects that were not there before or worry about losing scenes by going to the past at that time – Shuuki is sensible enough to only use the wristband when he has free time. That, and the game explicitly avoids bringing up the question of how time works. It simply does. No paradoxes, no puzzles for you to solve.

There are upsides and downsides to this approach. By favouring Shuuki’s relationships and personal growth over an overarching plot while still developing as a murder mystery, its resolution ends up feeling somewhat anti-climatic and, to an extent, out of the blue – if you seek the intellectual thrill of watching the pieces fall together and form a big picture you most likely couldn’t but should have seen coming, Break Chance Memento is not for you. However, the focus on the writing and the characters quickly makes the pleasant music and the gorgeous art feel homey. The colouring, especially on the backgrounds, is vivid yet not bright, which gives Break Chance Memento a mellow, but not depressing atmosphere. 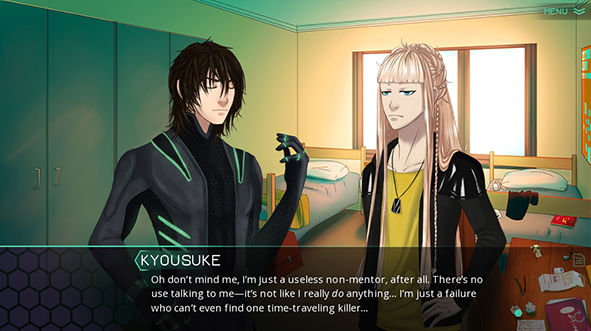 And it’s not as if the game leads you by the nose… at least not all the time. You do have to manage your mementos, since you can only carry up to five at a time, and it’s through the time machine that you get valuable information and interaction with possible love interests – Yukinari is pretty cute by the way. What I am trying to say here is that the fear of screwing up is still there. There is a flow of tension and relaxation produced by the writing occasionally ill-timed comedic moments, not by the time travel mechanics. Cyanide Tea chose to take full control of the feelings they wanted to convey and, for the most part, they achieved impressive results – even moreso since we are talking about difficult themes that require exceptional characters.