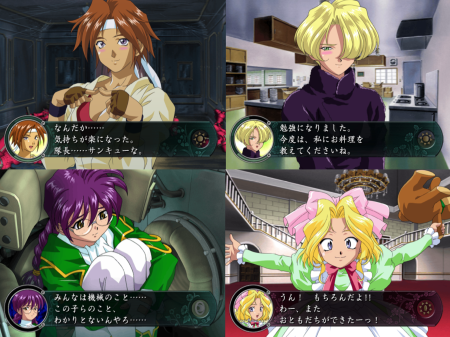 Let’s talk about a gem.

So back in 1996, when the Sega Saturn was still the new hotness, Red Entertainment released the first Sakura Taisen game which then proceeded to sell out within hours. Sakura Taisen had become a new fad and a game that people were literally buying the Sega Saturn just to play, making it a tremendous success. Then when the sequel, Sakura Taisen 2 came out it went on to sell over half a million copies on its first week, making it the second best selling “dating sim” game of all time. Famitsu also had a poll to decide the 100 best games of all time, and the first 4 Sakura Taisen games all made it in.

What I’m trying to say is that Sakura Taisen was a huge thing in Japan, and even though its time is over, it’s still considered a classic and retains a decent fan following. Characters from the game appear in both Project X Zone games, but a real Sakura Taisen game hasn’t been made since 2005.

The game uses eyecatches like these during chapters, as well as…