Sword of Asumi is an OELVN developed by AJTilley.com. Released early 2015, it is one of the young company’s already countless projects to be funded via Kickstarter. However, if some of the backers and Steam reviews are to be believed, the project had a lot of problems during development, which may have influenced the quality of the final product (spoiler: it did). As I have had first hand experience with some of this developer’s projects (including Divine Slice of Life and Highschool Romance), my expectations were rather low.

The game starts off rather well, introducing us to Asumi, a Black Hand Clan assassin who is sent to a high school focused on getting its students ready for combat, either as soldiers or tacticians. She is tasked with uncovering a mole that is hiding somewhere in the school, supposedly holding some kind of position of power. This person probably plans to do something big and evil, so her organization naturally responds by sending a trained assassin with poor social skills to uncover the truth. Her motivation in all of this is that she is trying to become a Justicar, which is something akin to a royal guard, or so the story tells us (it’s rather vague), which her superior tells her is only possible if she completes this mission. So, she sets out to find out more about mole knowing only the codename ‘Raven’. 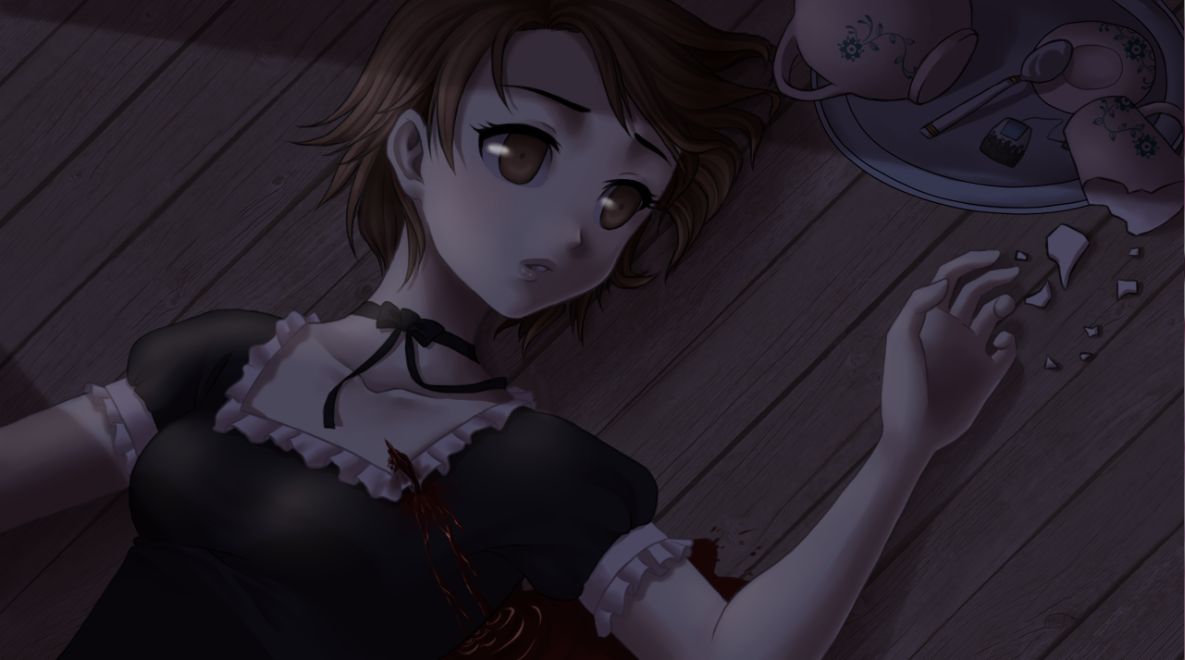 While this is all fine and dandy as far as an interesting premise goes, as it sounds rather refreshing compared to the average romantic comedy VN set in an average high school environment with average, trope-based characters, the execution turns out to be extremely lacking. This is not only apparent in the game’s art and music department, but foremost in the actual quality of the writing and the lack thereof.

The game is also incredibly short, clocking in at an impressive three hours, which is how long the game will roughly take to complete if you want to get all of the game’s 22 steam achievements. I’m not sure why you would be willing to put yourself through the same misery I have, but there you go. The game’s length aside, the art is also extremely limited, the game only having a handful of poses and expressions for each character and few CGs, most of them serving very little purpose besides cheap fanservice. This leaves the audience wanting more, especially when it comes to the combat scenes which, as it turns out, are quite boring when you don’t have some kind of CG to back them up. A lot of CGs also get recycled (likely due to budget issues, one would hope and/or assume), such as the final kissing scene of every romantic route, which is just slightly altered to represent the different character Asumi ends up with, or the changing scenes which, once again, serve little purpose outside of fanservice. 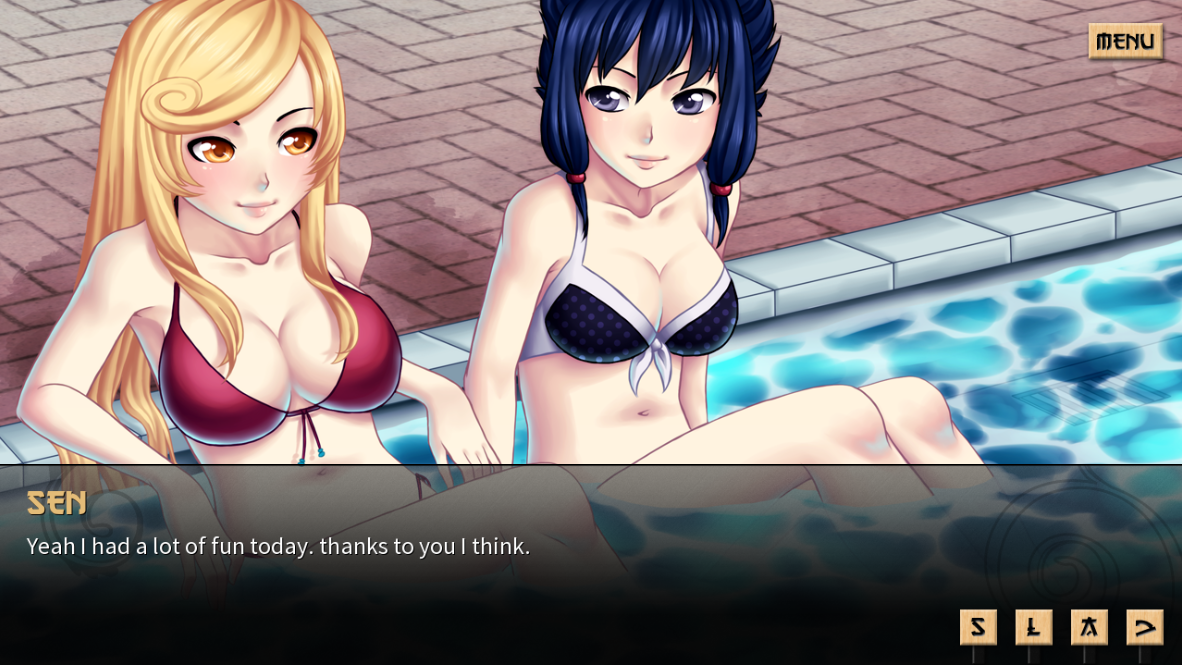 Short and limited are also adjectives that can be applied to the game’s music, which is actually quite fitting but ultimately forgettable. It should also be mentioned that there are several scenes which lack any kind of music, which would be fine if the game had voice acting, but it doesn’t. While this should probably be considered a good thing seeing the poor quality of the voice acting in AJTilley.com’s other release Divine Slice of Life, it makes very little sense from a design standpoint to not include any kind of music in said scenes. On a side note, the opening theme that plays while you’re in the main menu is of very poor quality, sound wise. Considering the fact that this is the first thing you’re greeted with when you start up the entire thing, it could actually be considered as a warning sign for things to come.

Now, onto the meat of this work: the writing. One could easily forgive AJTilley.com’s mistakes in other departments if this part of the VN were at least solid. Alas, it’s not. In fact, this is without a doubt their biggest failure. Although, you have to admit that it takes some genuine effort to screw everything up this badly. Not only is the plot extremely rushed (as I said, it takes about three hours to complete every single route), the romance half baked, and any sort of real character development thrown completely out of the window (you don’t seriously want us to believe Asumi went from a recluse to a social butterfly in one week, did you?), it’s also littered with tons of spelling, grammatical, and punctuation errors for the readers to enjoy. When talking about the latter, it’s easy to see what happened here. It was either written by someone who doesn’t know the first thing about how to write a decent sentence in English, or it was rushed in an attempt to cash in on poor people looking for good VNs on Steam along with the poor folks who funded this miserable attempt at an OELVN on Kickstarter. Anyways, having a capable person proofread their work was clearly too much for the geniuses over at AJTilley.com. 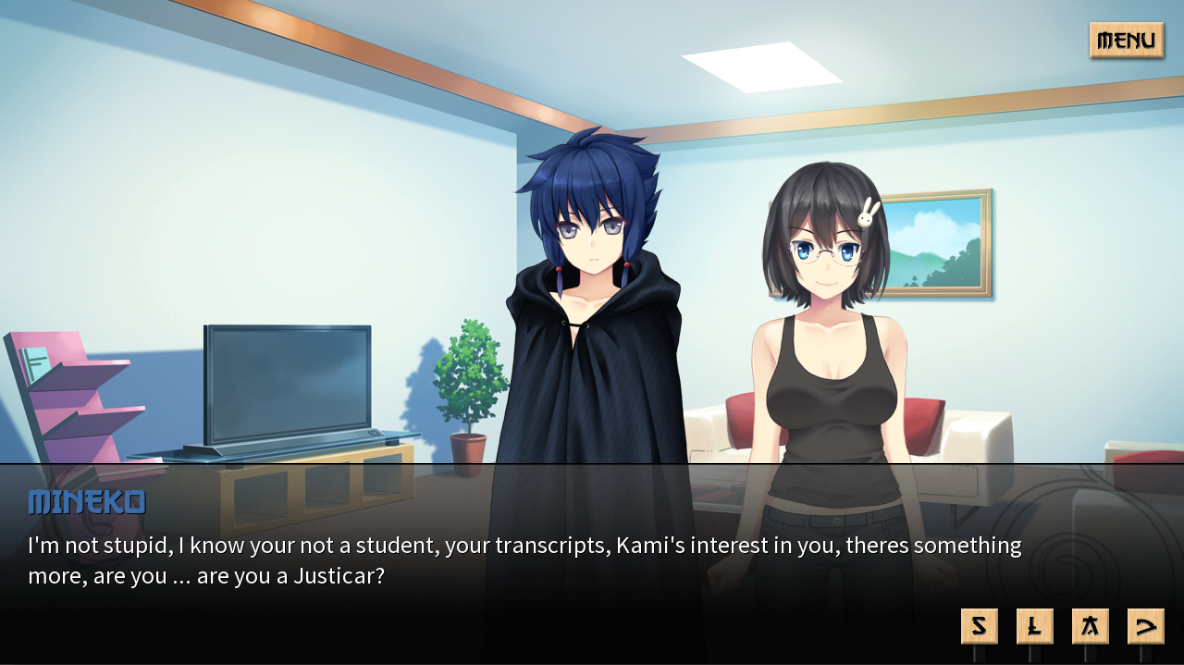 It should also be mentioned that Asumi might be the worst assassin ever. Sure, she may be great when it comes to combat, but when it comes to investigating her targets she is the absolute worst. Throughout the story she goes around asking everyone about this codename ‘Raven’, which should already be a giant red flag since his or her minions would be sure to hear about this and try to murder her (which totally never happens, talk about a buzzkill). Sadly, it is also really apparent who Raven is from the get go, since the game throws far too many clues at you at once, making the choice of who to go assassinate at the end of the game far easier than it’s supposed to be. The rest of the story could be summed up as generic high school schlock, but that might be giving it too much credit already. You go to school for a week in total, giving you the choice to attend one of two classes every day. The choice of class along goes along with the romantic developments of the game, which totally makes sense because being in the same class as someone for about a week is sure to make anyone fall madly in love with you, right? Needless to say, the actual romances are far too short to leave any kind of impact and feel like a rush job, just like the rest of this entire affair. It’s a shame, since the love interest’s personalities are all likeable, albeit a bit cliché. Alas, the game is far too short to give us any kind of time for a real romance to grow, so we just have to assume that Asumi is some kind of hot boy/girl magnet.

So, in the end we are left with a product with acceptable art and music along with an interesting premise it never really lives up to. Its writing is beyond awful and should never have been shipped without some kind of quality control first. If this was just a VN about Asumi’s job as an assassin, it would probably have worked a lot better, but right now it tries to do that and offer us romantic side plots at once, all in a one hour run-time. The final product was bound to end up half-baked at best with this kind of premise, even if the people behind it actually had some shred of talent in them. At this point in time, it’s safe to say that talent is the last thing anyone will accuse the team of having. Steer clear of this ‘VN’ at all costs.

Pick up Sword of Asumi on Steam!