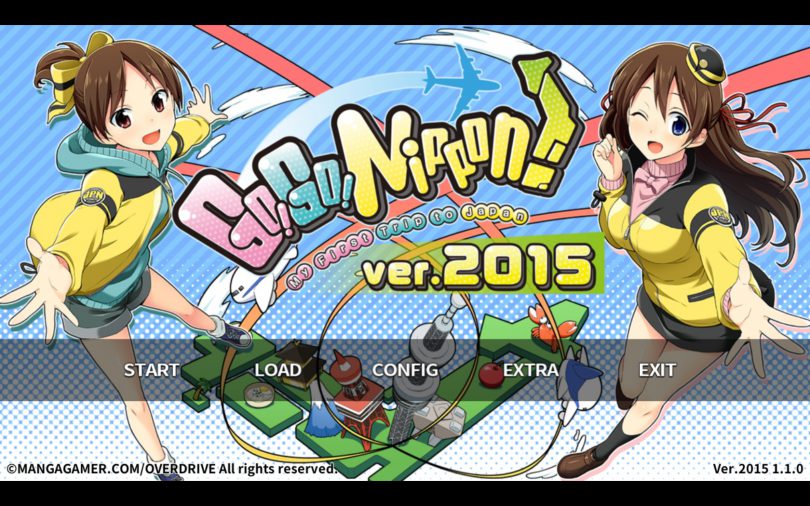 Originally released in 2011, Go! Go! Nippon has an interesting history.  Produced by OVERDRIVE (Kira Kira, Cho Dengeki Stryker, Deardrops) for a Western audience, GGN was created “exclusively for overseas VN readers, [and] features a Japanese-to-English dual language option,” and was released in both western and eastern markets by Mangagamer.  The original title was stellar, and very successful from what I’ve read.  I was also on that hype train, and I purchased a hardcopy of the game a while back.  Then, less than a week later, Go! Go! Nippon 2015 was announced.  And even though I was a little salty that I no longer had the latest version of the game, I was still very eager to play it.

I have played both versions of GGN through now, and while this review will mostly be about the 2015 remake, there are a few key things from the original that are missing.  Overall though, for those who are interested in a virtual tour of Japan where you can literally follow the characters with an interactive Google Map, this game is perfect.  And if you’re looking for a story with some simple romance and a lot of fun, this title is for you too.

You are a nameable protagonist.  After speaking with some friends online, you decide that you are going to visit them for a week in Japan, get to see the sights, try some of the local cuisine, and generally have a good time.  What you don’t realize is that Makoto and Akira are androgynous names, and it turns out that the two individuals you were speaking with are actually two very cute sisters.  Cue obvious discomfort.  Then, when you arrive at their home, you discover that their parents are away on business, and you are all alone with them.  While at this point GGN could have easily turned into a standard nukige, it remained classy.  During your stay in Japan, you get to choose three locales to visit, and you visit each locale with one of the girls.  In the 2015 version, there are a few locales where you go with both girls, but eventually choose one to hang out with one of them further. 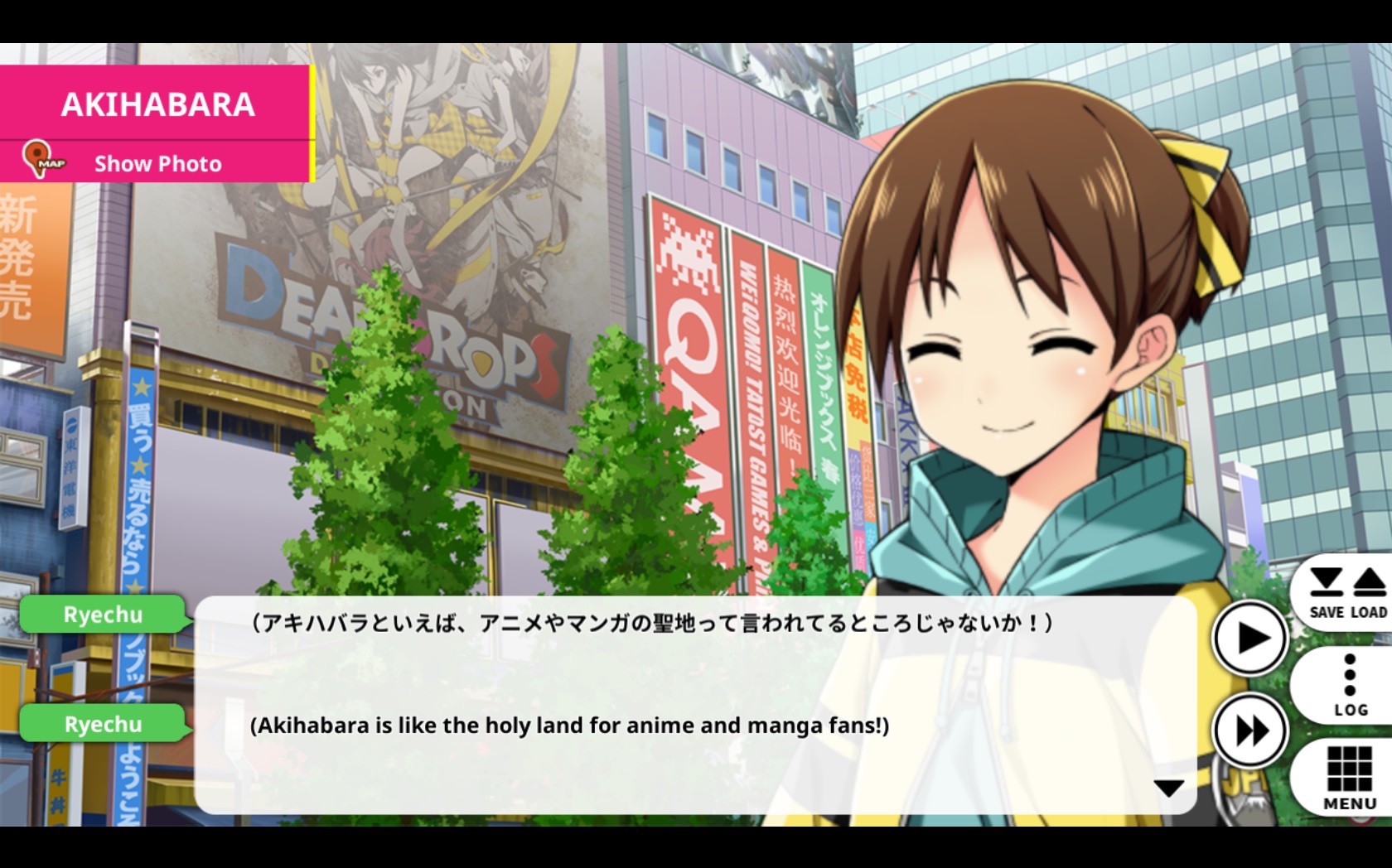 Damn right it is.

Which route you end up on is determined by who you go out with more.  Akira is the more active type, an excellent chef, but has a pretty fiery attitude.  Maybe it’s because she’s shy, maybe it’s because she thinks you’re a pervert (well, you sort of are), or maybe it’s just because she wants you to have a good time.  Makoto, on the other hand, is a bit more refined, and loves the smaller things in life.  Both of them are incredibly cute though, and very knowledgeable about the various locales you visit.  There is a good amount of infodumping in this title, but since the game is literally a virtual tour of Japan, that’s to be expected, and I actually enjoyed reading about the history of various landmarks in Tokyo and its surrounding areas.

And when I say it’s a virtual tour, I’m not joking about that.  You are able to follow every step you take with the sisters, and it’s literally like you’re there with them.  It’s a really neat touch that I would not have thought of doing.  In the upper-left corner of the screen the game tells you where you currently are, and if you click on “Show Photo,” you get something like this:

The absolute best use of two monitors ever. EVER.

The 2015 remake has had a large number of additions, including the E-Mote system.  A handful of newer titles are starting to use this system – the characters gain a little bit of movement when their sprites transition, rather than just static images. It gives the game just a touch more realism, and it’s a great use of the technology.  Additionally, all of the CGs were updated, and they looks crisp and clean, as expected of OVERDRIVE.  The music wasn’t updated, from what I can tell; it’s probably the only part of the game that isn’t memorable.

But what the 2015 remake did change was a lot of the content we were familiar with.  Lots of minor changes were made to the original scripts, many of the “between the day” scripts are vastly different (while others remained mostly intact, or with more options), and the endings are completely different.  Gone are the after-credits scenes, instead replaced with just an ending followed by the credits.  I feel a little cheated by the fact that the ending is the actual ending, and there isn’t a sappy little extra scene just to tie everything up.  I don’t know, it feels like I’m missing a little bit of closure, but if I get to the point where I need it, I can just go back and play the original title and get that little bonus scene, and all is well with the world again.

What I did find really great was the quality of editing that went into this piece.  It’s very rare for me to be able to say that I read through a piece and did not find enough errors to run out of fingers and toes trying to count them, but in my playthrough of this title I found less than a hand’s worth.  Kaitsu is now a goddess in my book, and between her and the betatesters’ editing (I was not involved with this project, for the record), I feel this was a great success. 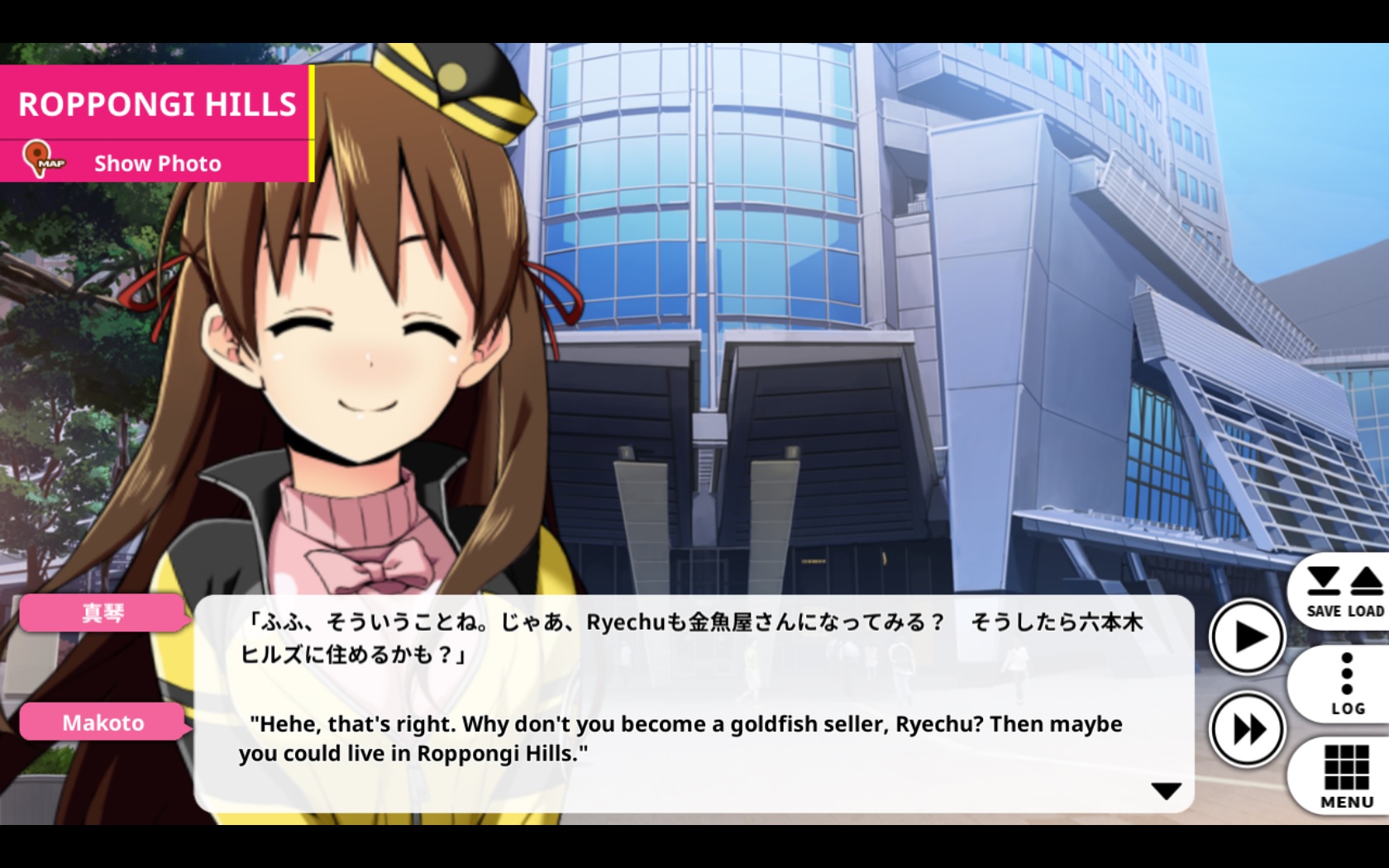 My goldfish will be infinitely better than your goldfish.

There is one very massive downfall to this title: you are either going to love it from the get-go, or you are going to hate it from the get-go.  If you’re not interested in a virtual tour of Japan, this is not the VN for you.  On the other hand, if you are interested in a little bit of Japanese history and want to see some of the sights, or maybe get a few ideas about where you could go when you finally get to visit the country yourself, definitely pick up this title.  You can pick up both titles for under $15, and honestly, that’s a steal.

Pick up the bundle from Mangagamer here!

+ Take a virtual tour of Japan!