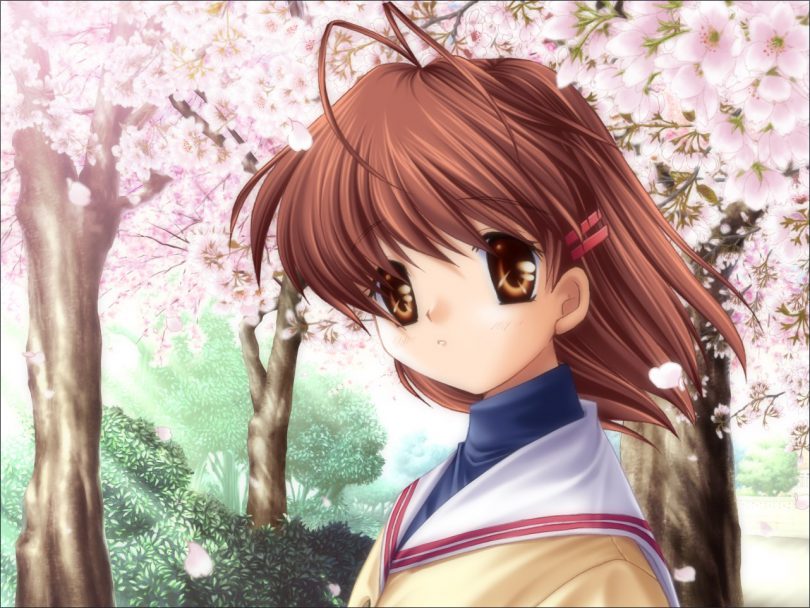 A new, English release of a Visual Art’s/Key visual novel is upon us, thanks to Sekai Project. Clannad is now the center of attention in the VN world (at least until Euphoria comes out), and with good reason. Thanks to Kyoto Animation’s great job of adapting Clannad into an anime, the franchise has a huge following, with an old, poorly translated version of the game being one of the more downloaded VNs from the old Fuwanovel repository. As of writing, Clannad’s new, official release sits at number 4 on Steam’s bestseller list (at least on my end here), which is phenomenal for a VN. The release of Clannad has been hyped for the better part of a year now, so just how good is Clannad? Let’s dive into this and find out.

Right from the start, Clannad sets a somber, yet somewhat hopeful tone. Tomoya Okazaki is a high-school student with nothing going for him. He is wandering down the path of life, alone, and without purpose. His mother is dead, and his relationship with his father is miserable, after his father abused him. Tomoya doesn’t care about school, or much of anything, and simply avoids his family as much as possible. One day, while walking to school, he sees a girl at the bottom of the hill. She is encouraging herself, or at least trying to. “Find some more things that are fun, more things that make you happy,” he tells the girl, who we later learn is named Nagisa. Together, they then climb the “long, long hill” up to the school, and so we begin our long, long journey that is Clannad.

Key has a knack for creating an interesting hook to open up their VNs. Clannad is no different; it blends music, art, colors, and dialogue to create a fantastic mood setter to get the reader prepared for what is to come. In typical common route fashion, we begin to get acquainted with the cast early on. Youhei Sunohara is one of the first characters, aside from the girl at the bottom of the hill, that we meet. He is Tomoya’s only friend, and is the type of person who finds trouble, even when he is not looking for it. Sunohara is the comedic relief of the game, always falling for one of Tomoya’s tricks, or getting into misunderstandings with people. I found the humor revolving around Sunohara to be enjoyable more often than not, but comedy is a fickle beast, and some readers may find it completely unfunny. Ryou and Kyou, twin sisters, are the only other people who really talk to Tomoya, and their interactions also are typically enjoyable. Ryou’s timid nature, however sometimes made her dialogue and actions dull to read, but these moments are few and far between. 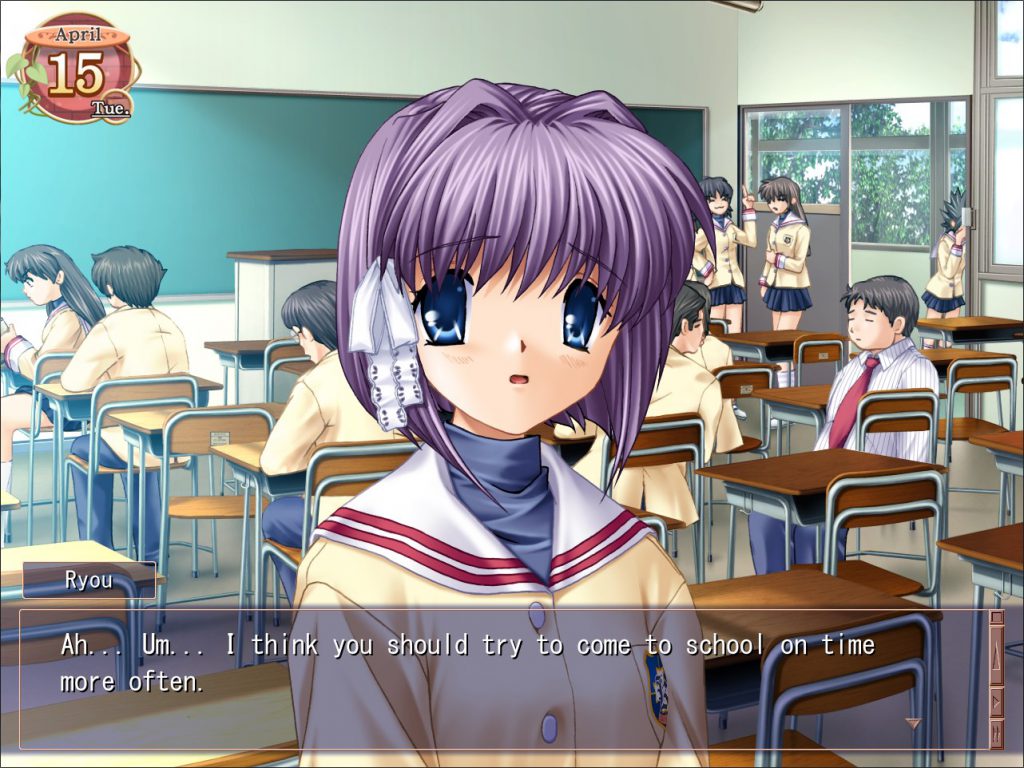 Many other characters make appearances in the common route, but the choices one makes during the common route will dictate who you see, and how often you see them. This is one area where I feel Key did an incredible job of writing. Instead of shoving every character into the spotlight at once and trying to give everyone plenty of screen time in the common route, Clannad instead sticks to just a few characters based off your choices, as I just mentioned. It allows the writing to stay focused, and work on setting up the actual character routes by giving you the relevant background information and character building. For example, if one decides to go down Kotomi’s route, the common route is not going to spend a ton of time going on about how much Fuko loves starfish. Instead, we learn how quirky and weird Kotomi is. 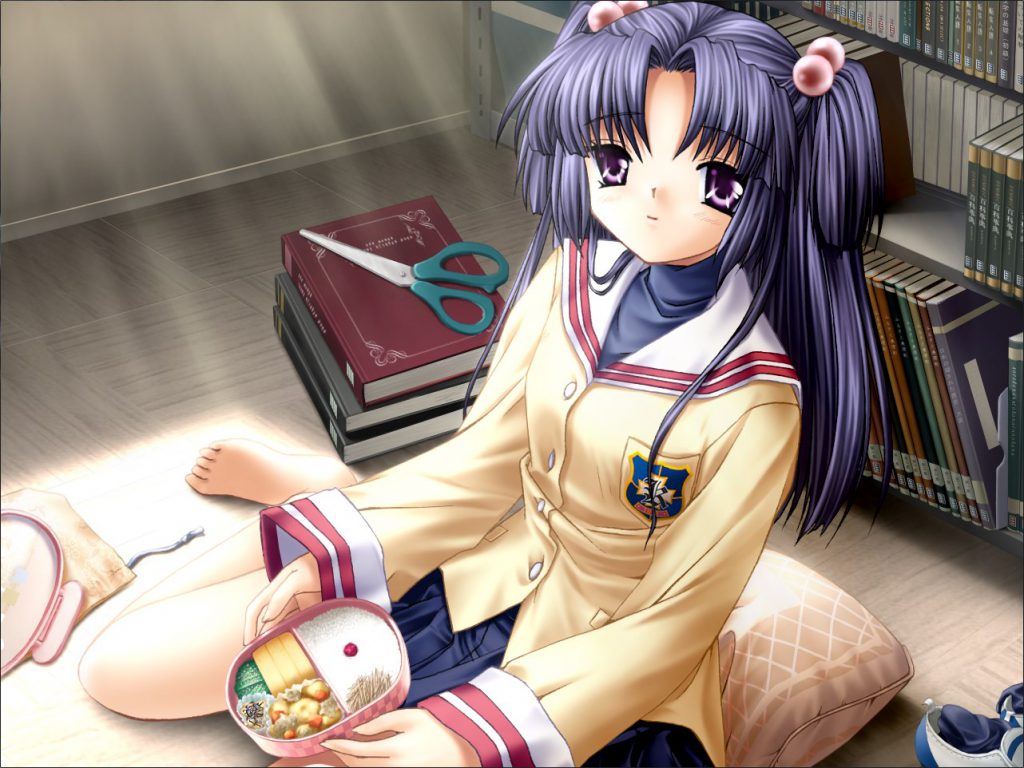 There is a drawback to having a a common route with lots of variety based on the choices though. Clannad has a large cast to choose from, meaning there are a lot of choices. It can be tough to get the right combination of choices to get onto a character’s route. While it is usually as simple as just hanging out with the character you want and ignoring everyone else, the game does have some choices that are not so obvious. A walkthrough is essentially required if you’re hoping to finish this game without tearing your hair out to find the one choice you got wrong. The actual character routes vary widely in quality, with some being fantastic (like Komura or Fuko), some being okay at best (Ryou/Kyou, Kotomi), and some being completely uninteresting and outright bad (Kappei, Yukine, Kappei, and Kappei). In most cases, the quality of the routes is high, even in the ones I found uninteresting. A few of them do rely on what I call forced drama, such as a character suddenly having a meltdown due to some seemingly insignificant event, or random memory loss, but surprisingly much of the drama in Clannad’s routes happens naturally, and with a solid foundation to work with. I give credit, again, to the common route being so focused for the most part on building the character for you and allowing the character route to focus on telling a story instead. 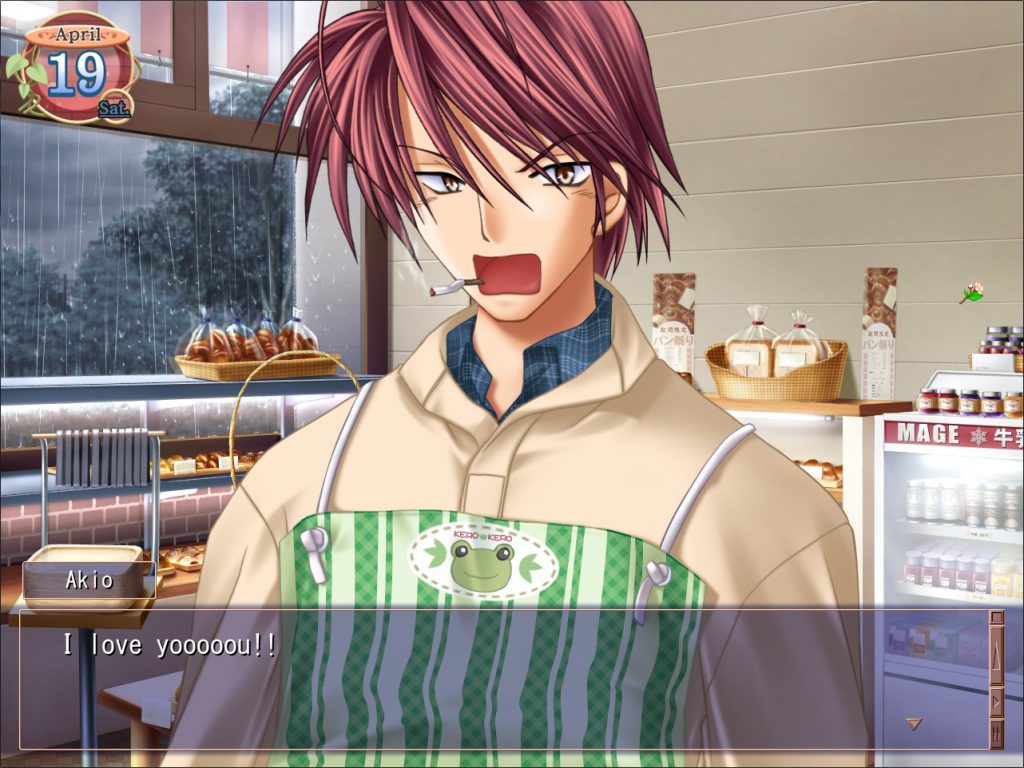 The girl at the bottom of the hill, Nagisa, is the main heroine of Clannad. Despite all of the other routes, her route is given the spotlight, and she is the subject of the true route, called After Story, that is unlocked upon the completing of all the other routes. Nagisa, due to her being the main heroine, is given the most character building, and grows the most as a character. We are shown this very often during her portions of the common route, her route, and on into After Story. The VN doesn’t need to tell us Nagisa is growing as a character, because we see it in the way she talks and acts. While she may not be everyone’s favorite character, there is little debate as to her growth as a person as the VN goes on. She is a wonderfully crafted character, and the perfect counterpart to Tomoya. Speaking of Tomoya, he may just be my favorite protagonist in a VN. He is sharp-tongued, witty, funny, a prankster, but also kind and caring when needed. Tomoya never passes up the chance to play a prank on Sunohara, or anyone else for that matter, but when push comes to shove and he needs to be strong, he rises to the challenge. His character growth in the routes is solid, but Nagisa’s route and After Story are where it really shines, when much of his past comes to light, and he is forced to face it head on. He is a highly interesting character to see the story of Clannad unfold as, and is just as much of a character as anyone else in this VN, as opposed to a blank-slate type character. 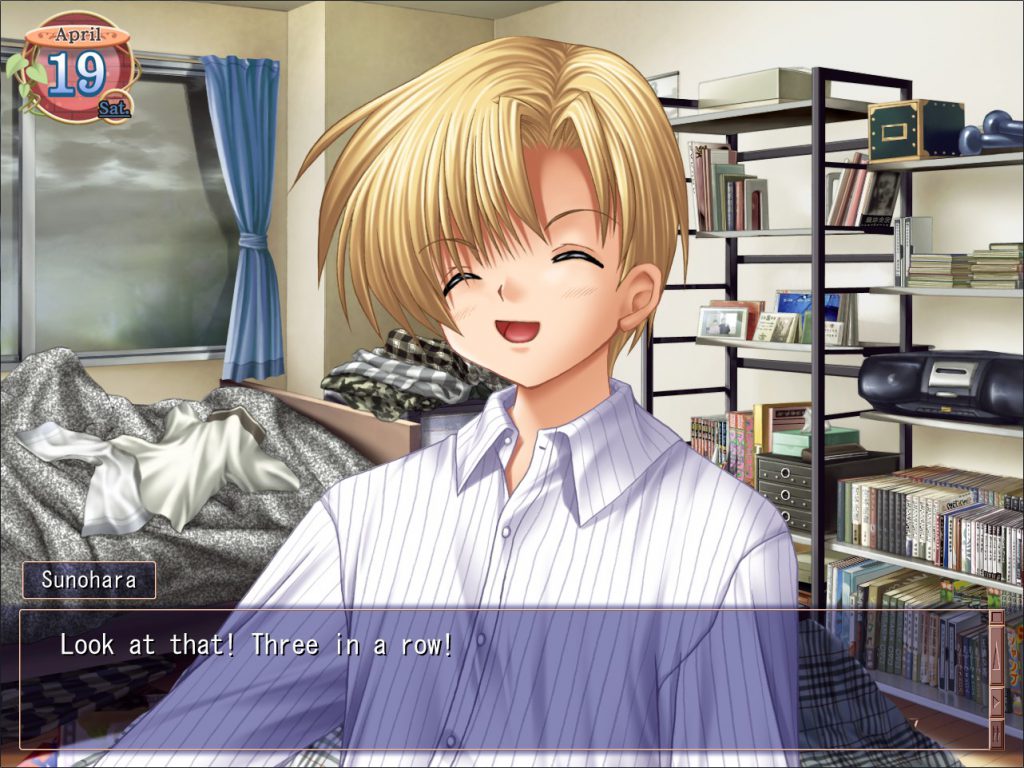 I’ve mentioned After Story a couple of times, Clannad’s true route. Without getting into spoilers, After Story is a continuation of Tomoya and Nagisa’s relationship, and holds a couple more routes that require completing in order to get the true true ending. Yes, while After Story is the true ending, there is a true ending to After Story. Unfortunately, I found its true ending mildly unsatisfying due to something that Key constantly does to their true endings. However, what does end up happening at least has some foundation and has foreshadowing throughout the VN. This foreshadowing comes in the form of the Illusory World, a world we get glimpses of at various points in Clannad. I won’t go into too much detail for fear of spoilers, but the Illusory World gave a decent enough explanation for the true ending of Clannad and After Story, and kept it from feeling like the ending was something that happened just for the sake of happening. Despite that, it still didn’t hit me the way it was intended to and I felt a lot of the emotional buildup of the VN was pointless.

Another issue I had with Clannad was the way it handled the true route and true heroine. The majority of the VN is seemingly in the various side routes, which must be completed in order to unlock After Story and the true ending. This ends up relegating Nagisa to the role of side character, or non-existent for large portions of my time reading. While a thematic purpose exists for forcing the reader to take up the large time commitment of reading every route, some readers may grow impatient, especially in a route that they do not enjoy, like Kappei’s.

A common complaint I see regarding Clannad is its art. It is true that Itaru Hinoue’s art style is off-putting to many, but I consider Clannad her turning point. Yes there are some bad CGs, and sprite poses, along with odd facial expressions and angles, but all in all, the art is tolerable, and not overly distracting from the text. Some of the CG work is phenomenal however, along with some great character designs. The best way to describe the art is inconsistent. Sometimes, the art in Clannad is good, other times it is very bad. The music, however, is always good in Clannad. Good is actually an understatement. The music is great. It is memorable, catchy, and fitting throughout the entire VN. More often than not, the music adds so much power to emotional scenes, and is the perfect mood setter. I simply cannot speak highly enough of Clannad’s soundtrack.

Sekai Project’s release of Clannad is easily the definitive release of the VN. Aside from having higher-resolution art work, the music has been remastered and re-recorded, and Sekai Project has added something called a Dangopedia. The Dangopedia is basically an encyclopedia of various Japanese phrases and terms that would be lost in translation. These pop up as you read the VN if you turn the setting on in the menu. It is a valuable resource to old and new readers alike. Most importantly for this release, Sekai Project has completely redone the translation and squashed numerous bugs. Gone is the infamous character, “No valid string, make a ticket about it” or Tomoya saying, “Is that so…” every other line in After Story. The old fan translation is long gone, replaced by a smooth-flowing, well-polished translation. While I am no expert in Japanese, (I know how to say oppai and that’s about it) I can say the text reads very well, and is not awkward to read like the old translation. Sekai Project put a lot of work into this release, and it pays off wonderfully, setting what I hope is a new standard for localization of older titles.

Most people reading this review already have an opinion of Clannad, and are here to justify, or reaffirm their opinion of it. For those of you who aren’t, Clannad is a good read, if you are willing to stick it out. Not every route will hit the spot for you, with some forcing the drama, or being too heavy with the drama. If you don’t care much for Nagisa you will be in for a bad time should you stick with reading Clannad in its entirety. The humor, while usually on point, may fall flat at times, or just be annoying to some readers. Clannad’s biggest flaw is that it is extremely long, and has a ton of branches which may lead to bad or completely unintended endings. For a newcomer, it can be off-putting to sink time into a VN like this, only to end up at a bad ending. Despite all of that, Clannad is still a good, but not great, VN.

+ Fantastic use of music