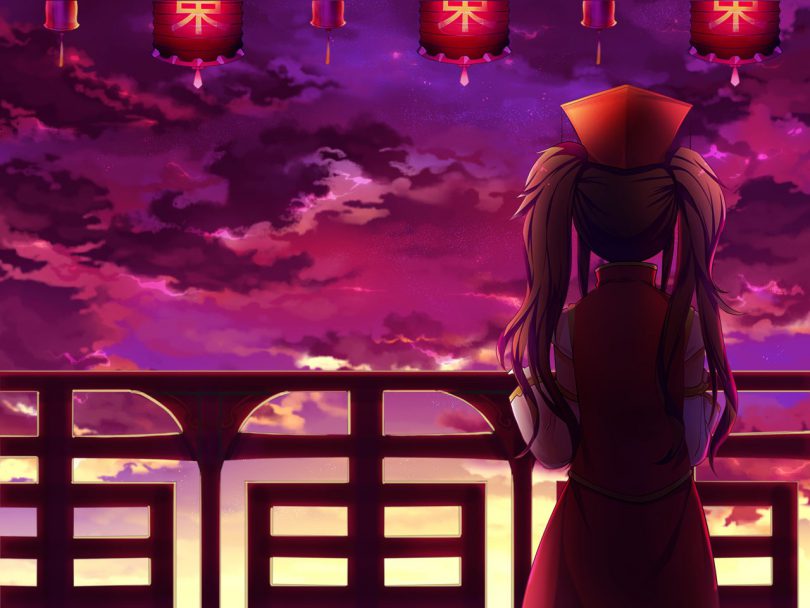 Being a slave isn’t the best career option available, in my personal opinion. Being a slave to a eccentric, somewhat abusive girl who can change fate and can kill you by simply looking at you with her eyes might be an even worse option. That is the predicament Gai, a ten-year-old boy, finds himself in after being sold by his West Tarian family to a temple in East Taria. Gai quickly realizes how bad his situation is when the girl in question is referred to as “The Treasure of the Nation.” Cursed Sight, from developer InvertMouse opens with a quick introduction to Gai, and the temple in East Taria where he will be serving “The Treasure of the Nation,” named Miyon. Miyon possesses an ability known as the Cursed Sight. It gives her the power to affect the future, at the cost of her energy, which is of great use to King Lok, the king of East Taria. It also causes anyone who makes eye contact with her eyes  to die. For that reason, she must always wear a veil over her eyes, to protect those around her. On top of all of that, she is also about ten years old, the same age as Gai, and extremely stubborn. Needless to say, the two children don’t get along very well, which is problematic for Gai who could very well be executed if he displeases Miyon to the point that it angers the King Lok. 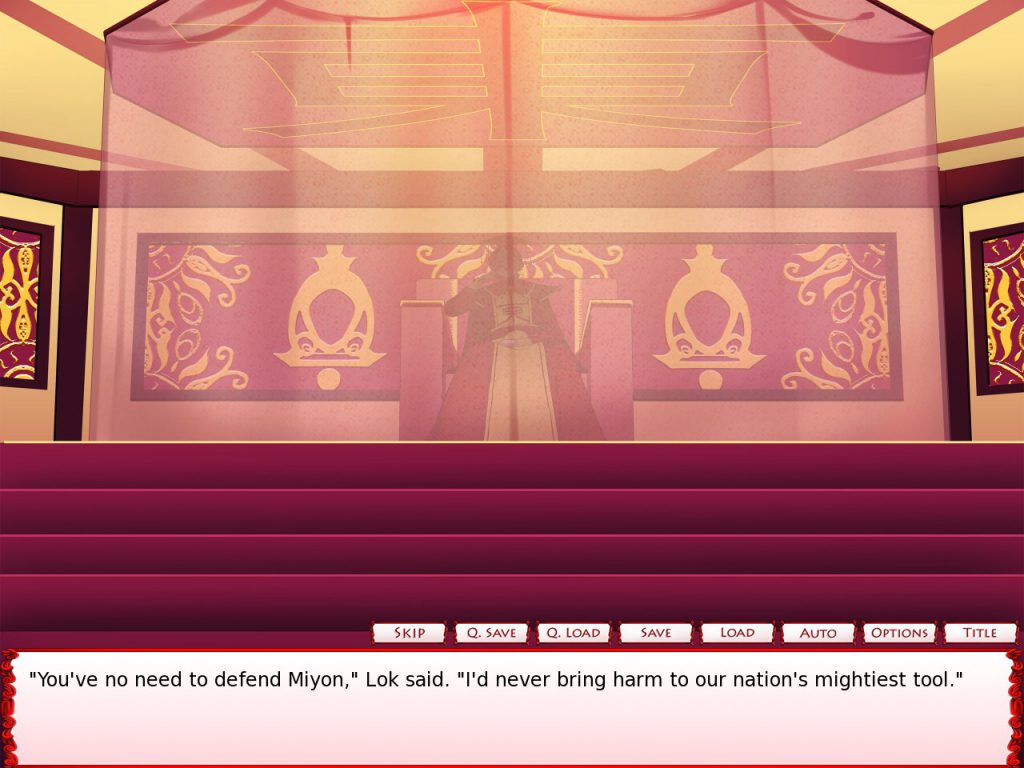 Gai is a treat of a character. At the start of the story, he is only ten years old, and is written as such. He whines, and complains, and gets flustered and embarrassed. Sometimes he acts selfish, and lets his anger get the better of him. Miyon is the same way, and acts as one would expect a ten-year-old girl who is used to only ordering slaves around to act. Now, it wouldn’t be much fun to read about two kids fighting all the time. I could just go visit my younger sisters if I wanted to see that. This is where Sasa plays a huge role. Being older than Gai and Miyon, she acts as a motherly figure to the two, stopping their fighting, making them talk to each other, and just being there for the both of them when times are tough. She is the perfect counter-weight to the two children, and Gai’s crush on her is so childlike, it reminds me of my childhood crushes. 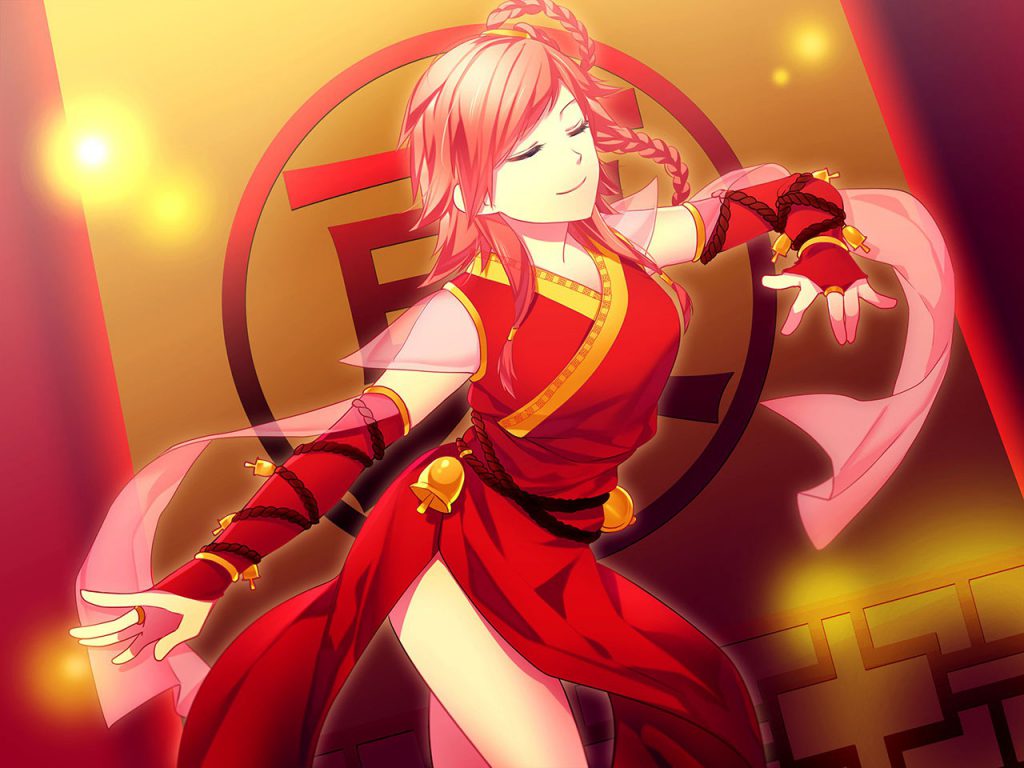 The first half of the VN allow us to get to know the characters very well. The days flow by naturally, with no explicitly stated time progression which allows Cursed Sight to avoid the rapid, sudden character development scenes that plague many VNs (A sudden development to a character that happens in an unrealistic amount of time is what I am referring to. The main example of this is the protagonist and female falling in love over the course of a week in a common route). The story, after building the characters up in a methodical manner, starts moving forward in the second half of the VN. King Lok declares war on West Taria and begins using Miyon’s powers to his benefit. This begins to take a toll on Miyon, tiring her out more easily, and even worse for her well-being and safety, her powers begin declining. Gai, now willingly helping Miyon with Sasa’s encouragement is extremely worried about her, and begins looking for ways to help her. The story, especially in the second half, is powerful, but still does not ignore the characters, keeping the fun, enjoyable character interaction that I came to love in the first half of the VN. Despite that, things do get pretty heavy later on, and the choices that you must make can be difficult. It is absolutely worth getting every ending though, as care and effort was put into each one. The true ending is phenomenal and easily one of the best endings to any OELVN I have read. 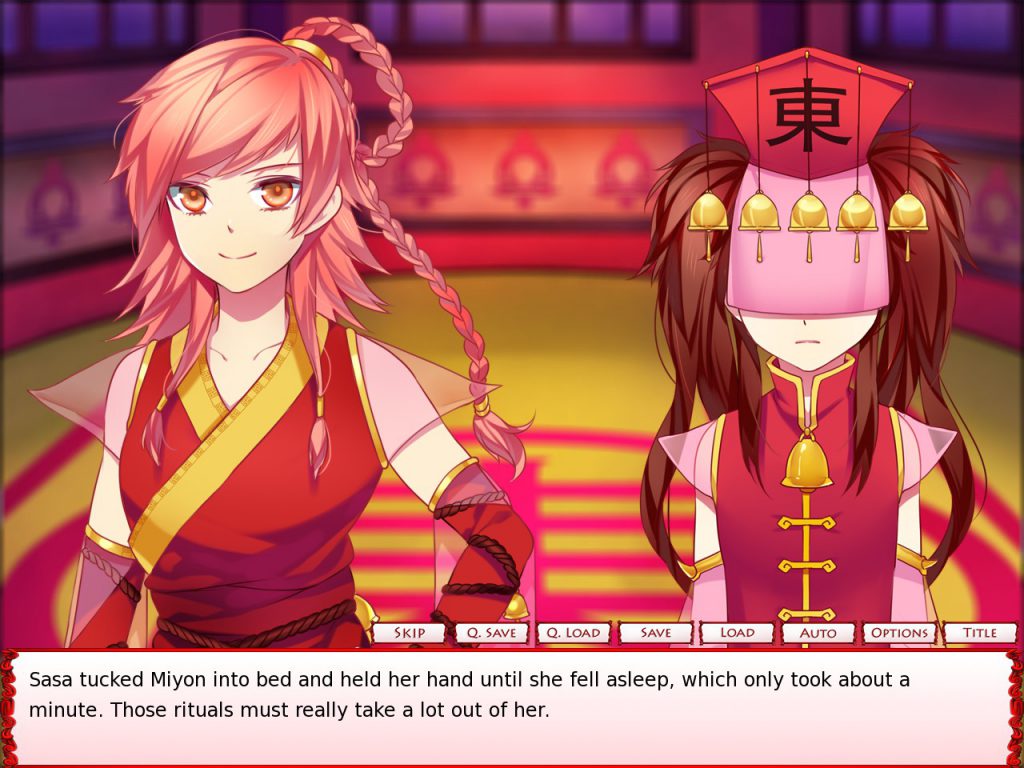 The art of Cursed Sight is very high quality, and professional. The backgrounds are vibrant, and the characters show so much personality through the art. When a character smiles, their happiness shows. It isn’t simply a drawn smile, its a facial expression of happiness (which is even more impressive for Miyon whose face we only ever see half of). What I think I loved even more than that was the aging of the characters. The VN does feature a time skip, and the character portraits age appropriately. Its a fantastic touch, one I’d like to see more VNs with a time skip or long time progression do. I really only have one area I feel the need to be nit picky on with Cursed Sight. The writing style can be confusing at times, and this is mostly due to the presentation of the writing. Like most VNs Cursed Sight features a text box, but it reads more like a book/novel rather than a VN. The portrait and name of the person speaking do not appear when there is dialogue. Instead, it works like a book, with the quoted dialogue being followed by, “said Miyon” or “she said sadly”. At times, I found myself getting lost trying to figure out who was speaking, though this is more due to my fast reading pace than it not being stated. Cursed Sight is a fantastic, tightly bound narrative that will pull on the heartstrings more than once. It features fun, enjoyable characters, with great production values, and a wonderful story. It is a bit on the shorter side, clocking in for me at a bit under 2 hours, but it’s very focused on telling its story, and does not add too many fluff scenes just to pad out the length. I highly recommend Cursed Sight for any OELVN fans, and VN fans alike.

- On the shorter side for some readers