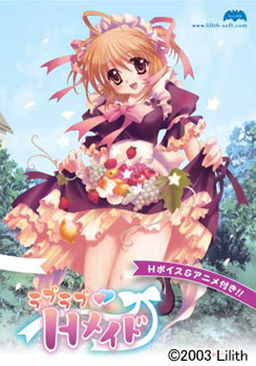 Welcome to Ryechu’s Nukige Corner, where I introduce you to nukige titles you may not have heard of before.  For those who aren’t in the know, the term “nukige” refers to games that focus solely on sexual content.  The plots of these games serve only to set the scene for the H-Scenes.  If these types of games are of interest to you, read on!

Every once in a while, you’ll come across a nukige that you really hoped would be fantastic, but fell flat on its face for a variety of reasons. Unfortunately, Love Love H-Maid, released by Lilith Soft in 2003 and translated by Accelerantblue seven years later, is a title that ends well before it even has an opportunity to start.  But is it at least worth the forty-five minutes?

Because of how short this game is, there’s little time to have any sort of plot when there’s six H-scenes that have to take place. It’s your birthday, and it seems that everybody has forgotten about that. The housemaid (and your girlfriend), Kasugano Sora, wakes you up like she does every other day – with a boobjob. Then your father shows up, eats dinner, and leaves without really saying anything. Now totally pissed, you decide to go back to bed, but then Sora presents you with your birthday present – her. Shenanigans ensue. 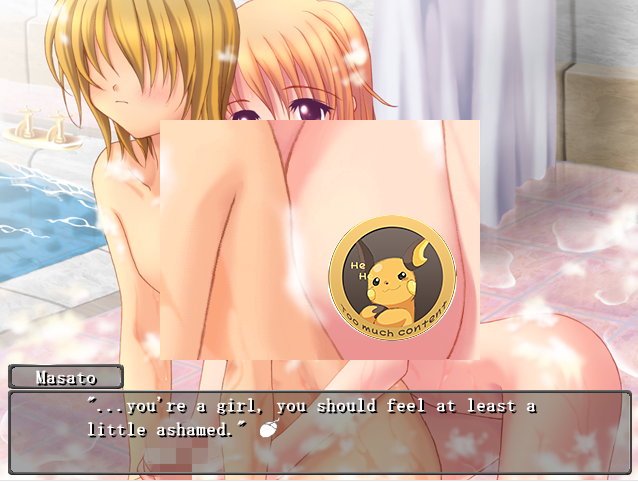 So I actually thought this game had a lot of potential, but then it just…ended. The artwork is cute, the animated scenes were decent (they’re really just small gifs, but the presentation worked perfectly). The couple was really cute, and I would have loved to see more. But the fact of the matter is that they just stopped the game. They could have added hours to this story pretty easily, I’d say. I mean, the description of the game even says that it’s “A cute and ecchi story depicting the sweet everyday life of a boy and his maid.” I’m sure there’s more to their everyday life. Hell, even I’d get bored of doing that after a while – there’s only so much to do.

The entire rating is based on that single fact. While it shows a lot of promise, I have to base the review on the content, and the major lack thereof drives this VN’s score waaay down. Great art and decent bonuses can’t overshadow that major flaw.  Play it if you’re looking for something really quick and really cute.

Pick up the patch here! – VNDB