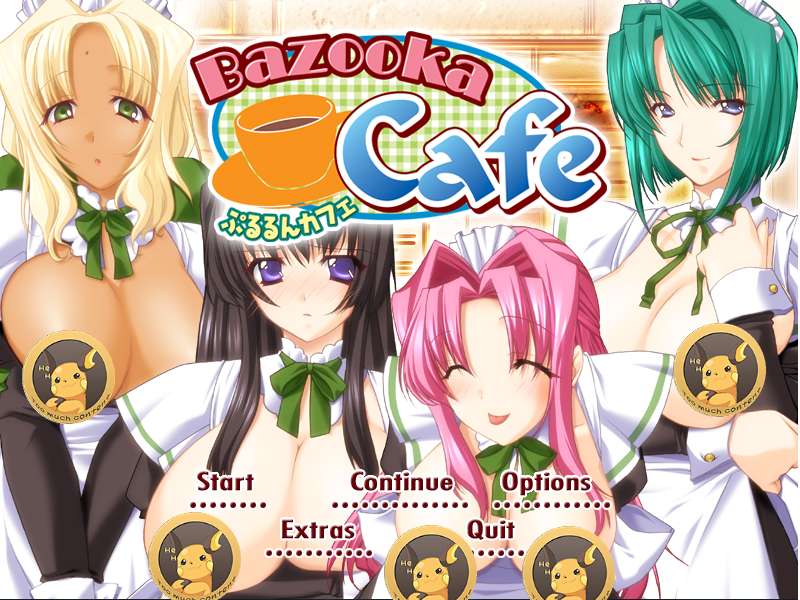 Welcome to Ryechu’s Nukige Corner, where I introduce you to nukige titles you may not have heard of before.  For those who aren’t in the know, the term “nukige” refers to games that focus solely on sexual content.  The plots of these games serve only to set the scene for the H-Scenes.  If these types of games are of interest to you, read on!

I don’t know what it is about giant breasts in VNs that gets me interested in them.  Outside of games, I don’t see the appeal of anything that big.  I’ve always had a preference for tomboys (or tomgirls, but that’s a different story for a different day), and that’s probably not gonna change anytime soon.  However, Bazooka Cafe, the second-to-last game released by Trabulance right before Christmas 2004, and localized by G-Collections (an old subsidiary of JAST) in 2007, definitely helped me understand their appeal just a little bit more.

After his father dies, Hideyuki Mizuno, an office worker, is forced to take over his father’s business. Introducing “Cafe Ariel,” a small cafe that advertises the city’s “best black tea” and “big-breasted girls.” Though it wasn’t always that way – when Hideyuki realized he was never going to be able to run the cafe by his lonesome, he enlists (if you consider girls throwing themselves at him “enlisting”) the aid of a number of acquaintances of his, all of whom conveniently have massive breasts. After some relatively obvious choices, you get to choose which girl to pursue, and after doing so, you get plenty of H-Scenes that, you guessed it, revolve around your selected girl’s oppai.  It’s not terrible for a nukige plot, actually – it gave the writers a reason to give everybody sexy outfits, and it probably helped persuade them to get the runtime over three hours.

This is your run-of-the mill nukige with average effort put into it. The characters are drawn well (and the English version is 100% uncensored, and looks pretty good), and since I’m pretty sure you know why you’re playing this game, you’ll be pleased with what you get.  All of the music is synthesized, and there’s eight tracks in total, so get used to hearing the same track over and over. All of the characters except for the protagonist are voiced well, but nothing particularly stuck out as good. The dialogue is mediocre overall, and even the sex scenes suffer because of it.

Overall, it’s not horrible, but it’s not amazing.  If you like big breasts, you’re going to get a kick (and probably a couple other things) out of this. If you don’t…well, I mean, look at the title, what were you expecting? And don’t tell me something involving war.  Military cafes aren’t sexy…unless they have tomboys in them… umm, excuse me for a bit…

There’s also a fandisc for this game (Bazooka Cafe: Valentine Special), which contains the always-popular harem route with no choices.  Definitely worth reading if you enjoyed the original.

- Stories end rather suddenly, even for nukige