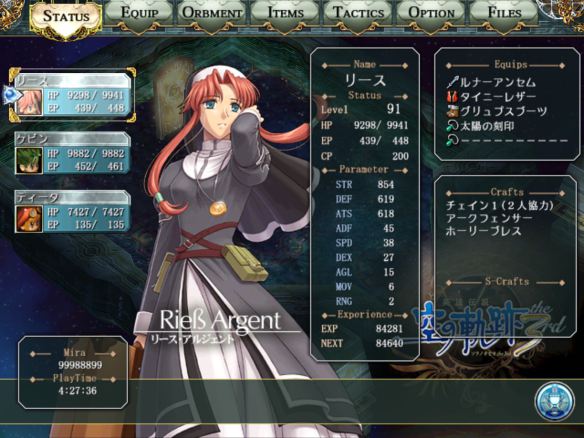 JP title: 英雄伝説 空の軌跡 the 3rd
The Legend of Heroes: Trails in the Sky the 3rd

So now we finally come to this game, the black sheep of the Sora no Kiseki trilogy. Why black sheep? Well, because it’s actually quite different from what one might expect from a Kiseki title after Sora FC and SC. And many people may or may not like that. In fact, 3rd might as well be considered a separate game, rather than a sequel to SC itself, even though it does chronologically take place after the events of SC. Either way, let’s get started.

First off, you no doubt have several questions, the first one being something along the lines of “but the story of Estelle and Joshua ended in SC, right?”. You’re right. Well… sort of. They’re not the protagonists anymore, that much is true. In fact, the main plot of Sora no Kiseki the 3rd revolves around the backstories of Kevin Graham, (the priest who played a semi-minor role in SC) and his childhood friend, Ries Argent. Anyway, Sora 3rd is often called a dungeon crawler and a “fandisc”, and if I’m to be honest with you, I gotta say both…