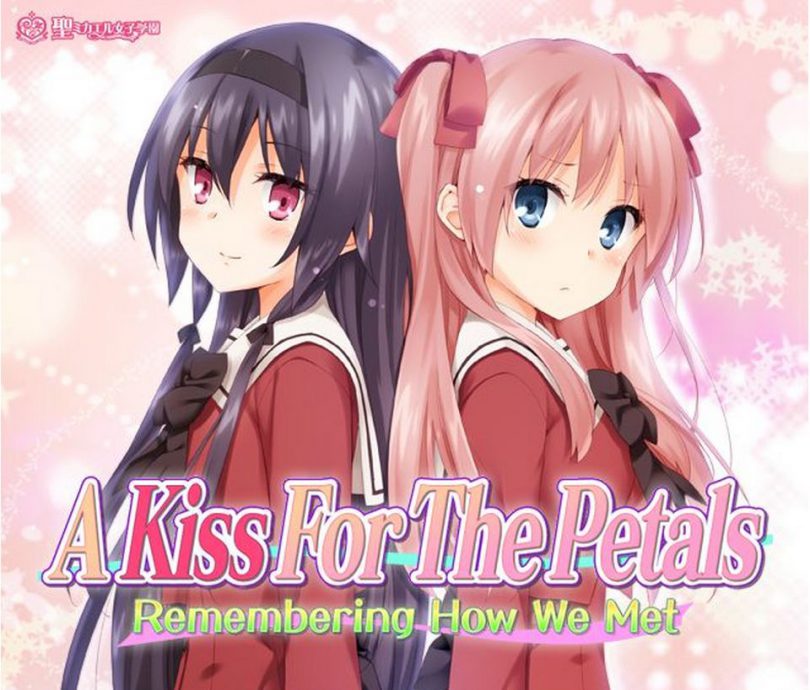 I’m not going to lie; I’m a yuri fan. I have, on occasion, gone to safebooru and searched for yuri just to overload myself with cuteness. At work. I’ve previously read 5 fan translated installments of the Petals series, and I went into Remembering How We Met without expecting much in terms of story. Most of the series has very high sexual content – a bit too much for me, though I do enjoy adult content. As such, I was definitely in the market for something with none whatsoever. The first official English-translated part of the A Kiss For The Petals series is either the first or second non-adult installment, depending on whether you count the diabetes-inducing spinoff Hanahira! or not. Originally a Japanese mobile game, the English version is instead available on Steam for Windows, Mac and Linux. It’s meant to complement the earlier and rather more erotic VNs featuring the same characters, but those remain untranslated as for now. As such I’ll be going into this knowing what came before, potential spoilers be damned. 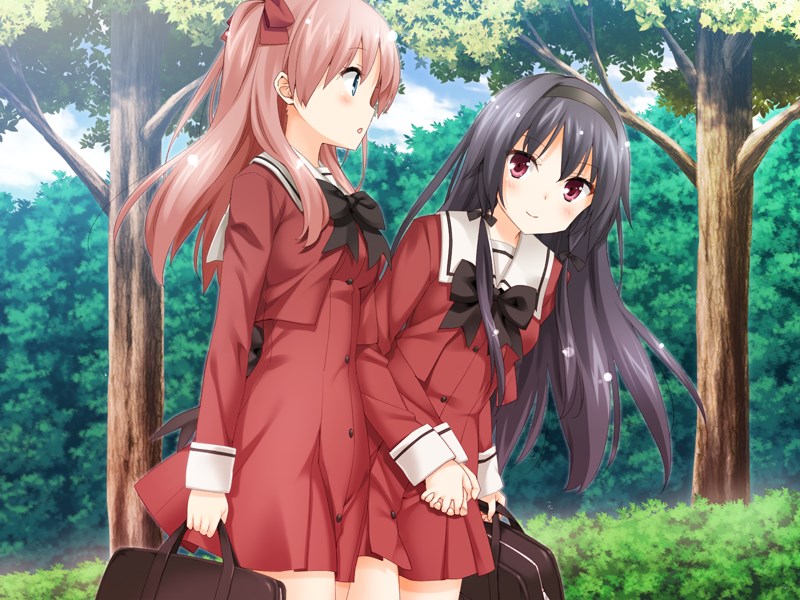 Remembering How We Met starts off with a framing story where the somewhat tsundere class rep protagonist Risa smiles as she thinks back to how she met her girlfriend Miya, an aloof genius reminiscent of Little Busters!‘s Kurugaya. Miya makes a rather perverted assumption as she sees this, and proceeds to be much more lewd than the VN is at any point afterwards. The misunderstanding is eventually cleared up, and we move right along to the tale of how Risa and Miya met. 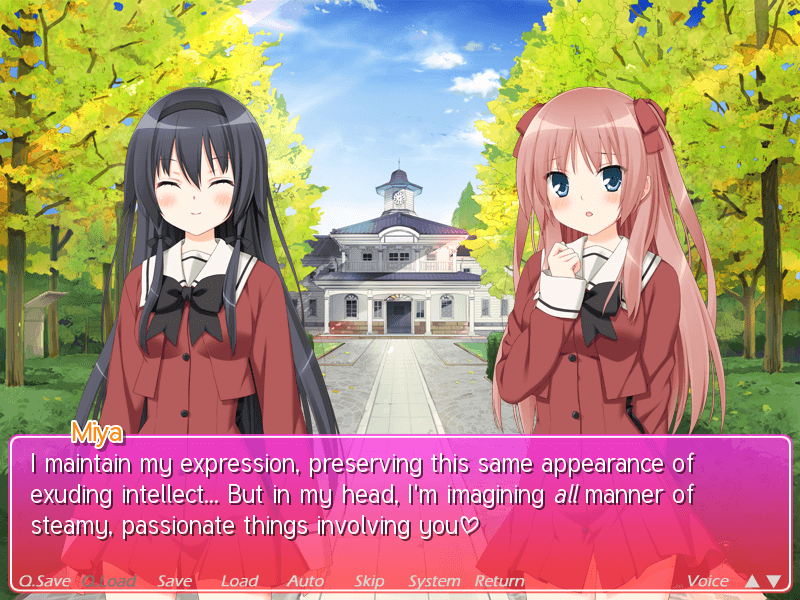 The story is essentially a romantic comedy with some dramatic scenes, especially one at the end, to spice it up. This mostly takes the form of Risa trying to get Miya to stop skipping class and Miya giving her the slip in entertaining ways. I personally cried at the later dramatic climax, but I am known to cry at literally any scene attempting drama ever. All in all, there is some substance here, but it’s mostly just cute girls liking cute girls. Not every story has to be all serious though, and Remembering How We Met is certainly cute enough. 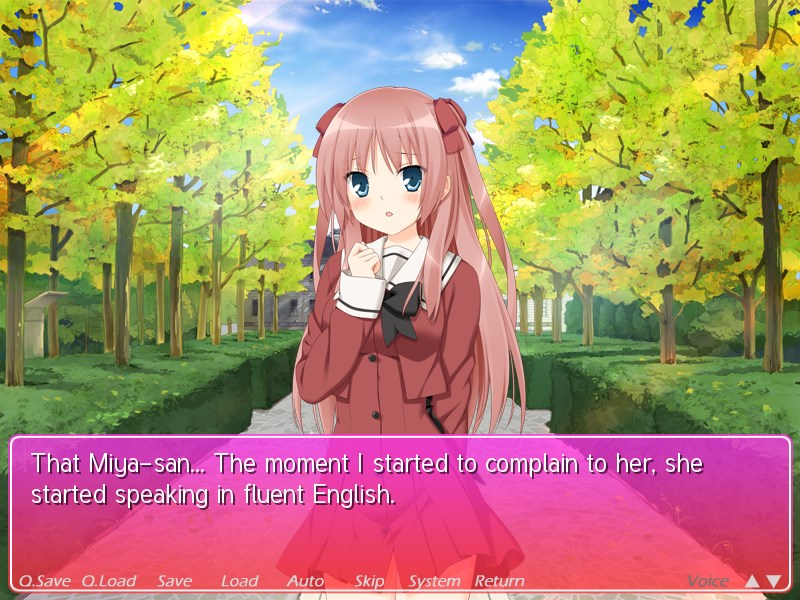 While I sometimes like to pretend that the story is the only important part of a visual novel (I read a lot of old doujin VNs, after all), there are a few other elements to consider. One such element is the background music, which is decent but not exactly memorable. The tracks that play during the more dramatic moments do take things up a notch, but just no more than a notch. The title screen music actually made me nostalgic because it has remained unchanged since the first entry in the series. In fact a lot of the music is reused from earlier Petals VNs. As for the visual part of the visual novel, the backgrounds are of professional quality but nothing in particular stands out, although the event graphics are very nice in my opinion. The decision to almost copy the main character designs of Madoka Magica is a bit questionable (and Risa’s hair decs are less cute than Madoka’s too T_T), but I guess they’re cute enough. Sprite direction is on the higher end of adequate but not stunning. There was one roughly five-line stretch at the beginning where I really think an expression change would have been appropriate, but aside from that I didn’t notice any major issues. The UI could have been better. The quick save button has zero feedback when pressed; the settings screen is missing a master volume slider, a reset to defaults button, and a somewhat unclear “Next” button leads to another page of settings (this is normally where the Cancel button would be, but that doesn’t exist. RIP.) There are no tooltips telling you what “Emphasize Voice” on the next page does; I figured it out because I’ve read other VNs with a similar volume reduction during voiced lines, but others might not. Most of these problems are likely due to fact that the interface was copied from the other Petals VNs. I also personally find the color for selected options rather offputting.

Top left: selected. Top right: hover. Rest: inactive. There is also a hover-over-selected-option color that I’m too lazy to edit in.

Some more positive points would be the option to hide the textbox altogether, which I think would have been better off being the default setting. You can also change hotkeys from the classic set to Ren’Py’s defaults (though I consider those to be terrible…) The text remains nice and sharp when you scale up the VN, similar to how MangaGamer’s earlier Higurashi release worked. The rest of the UI (and the hearts, bane of fan translators everywhere) can’t quite keep up though, leaving things a bit uneven.

I did find one bug that really bothered me. If you use the backlog feature with Emphasize Voice on, after the BGM volume has increased back to normal after a voice file has finished playing, the volume will erroneously drop if you go back to unvoiced lines in some cases. This is pretty jarring. I also felt that the feature cut down volume a bit too quickly at the start of a voiced line in some cases. So, the backgrounds and music are decent, the event graphics are good, and the UI needs some work. While I would normally die before admitting this, I think the art is a major part of my enjoyment of this VN: it may be at an 800×600 resolution, but boy did they pack some hella cutesy shininess in there. The rest didn’t really impact my experience much either way, bar the annoying volume bug (though looking for a way to reliably reproduce it did entertain me, nerd that I am). At the end of the day, A Kiss for the Petals: Remembering How We Met is a cute story first and foremost. If you like the sweeter side of 2D lesbian romance, this is for you – otherwise, there’s little point in reading it. I should note that I’m going to rate this according to my own enjoyment, artistic value be damned. Read the gosh-darned text instead of the number.

- Not for those wanting a serious story

- UI could be better