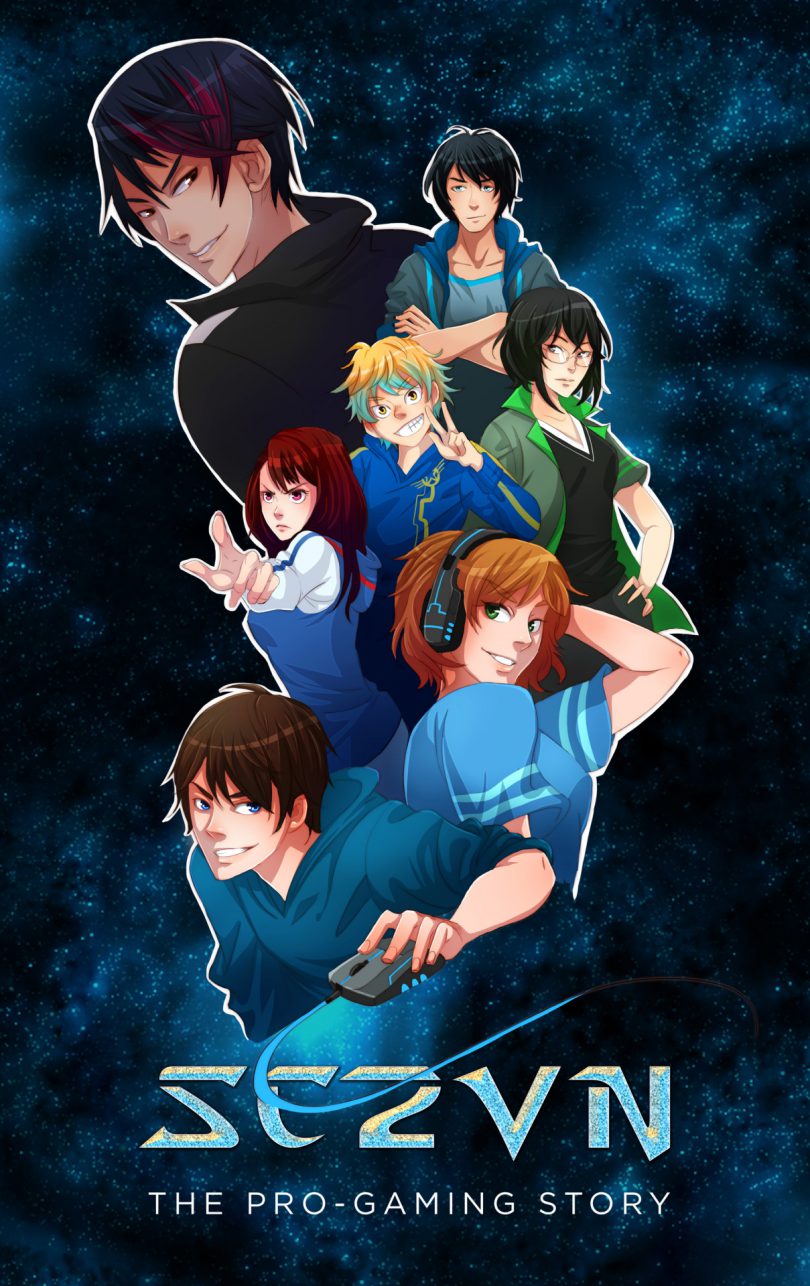 SC2VN is a visual novel released in September, 2015 by TeamElevenEleven and tells the story of Mach, an amateur (but by no means bad) American StarCraft II player who travels to Korea in hopes of becoming a professional.

Sports and games based on one-on-one confrontations amaze me to no end, but in a rather bleak manner. Tennis, taekwondo, chess, Magic: The Gathering. I have always been better at team sports, perhaps because you can cover up for someone and have someone cover for you too. One-on-one games have this dangerous sense to them that in defeat the shame is yours and yours alone, but in victory the pride is not only yours because you were never really alone and everyone wants you to acknowledge them. So it’s cruel, very cruel to those who lose and I deeply admire those who can endure it. This is why it’s probably safe to say I always focus on not losing rather than winning when playing such games. 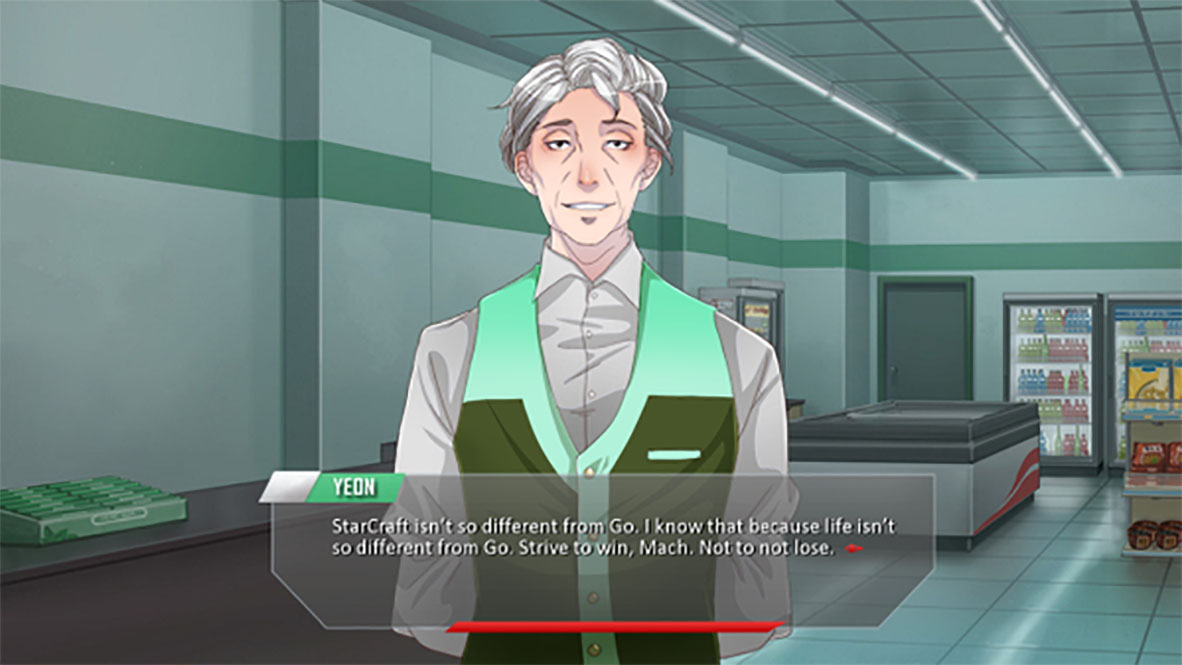 SC2VN rightfully and accurately called me out on this behaviour.
The first thing SC2VN does is to ask you how much you know about Starcraft. If you don’t know much, you’re introduced to the basics of the game in a rather poorly voice-acted sequence. This dissipated the notion that I was going to have to insert a cheesy line such as “SC2VN is more about making friends than it is about Starcraft” in this review, though I was secretly hoping to. This game is very much about StarCraft, its scene and its culture, clearly written by people who know everything there is to know about it. There is even a glossary and the characters talk in jargons all the time. But it’s not as if it’s educational or appealing only to a specific fandom. In many aspects, it’s more suited for those who do not play StarCraft II than for those who do.
I say this because the second thing SC2VN does is to put you in the middle of the action, right away. Mach (whose gender is a choice that scarcely impacts the story but somewhat diversifies the dialogue) has just failed in a tournament qualifier. Not just any tournament but the one he or she specifically traveled to South Korea for, risking his or her savings for the dream of becoming a professional.

You have a bit over a month left in a foreign country with no friends where you must, somehow, keep pursuing said dream. 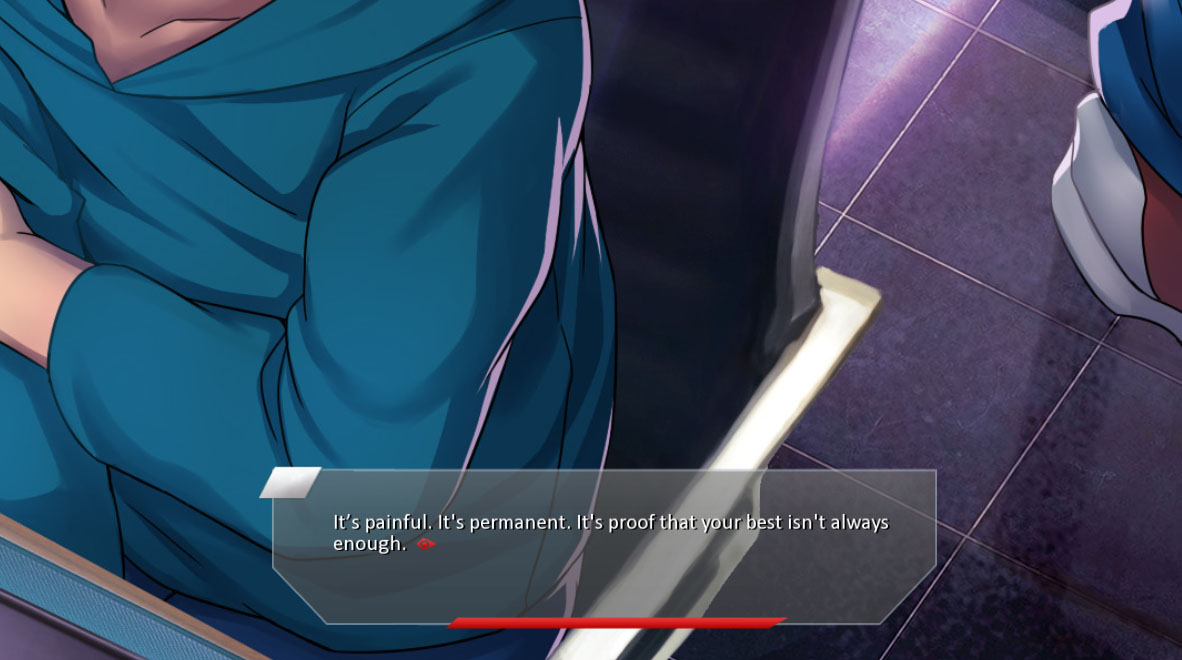 In other words, you are met with utter failure from the start and get to taste a bit of the crushing shame and guilt I mentioned. Flashbacks take you to your parents, who think little of your dream but since they didn’t have to pay for anything didn’t particularly care either, and to all sorts of doubtful looks from friends and South Koreans. Indeed, you are a nobody and don’t need (or have) anyone to tell you so.
The climb up the steep hill is admirably written, but I cannot talk about how well-written SC2VN is without talking about how engaging it is to read: direction and text work side-by-side so that even those who don’t know and wouldn’t like to know a thing about StarCraft can have the experience of competitive gaming, with all its thrills and adrenaline rushes. Many of the choices are actually simulations of StarCraft II situations, but all you have to do is some basic strategic thinking and paying attention to the information you’re given. If someone tells you to be careful, later on you’ll have to find the careful choice amongst the ones you’re given. 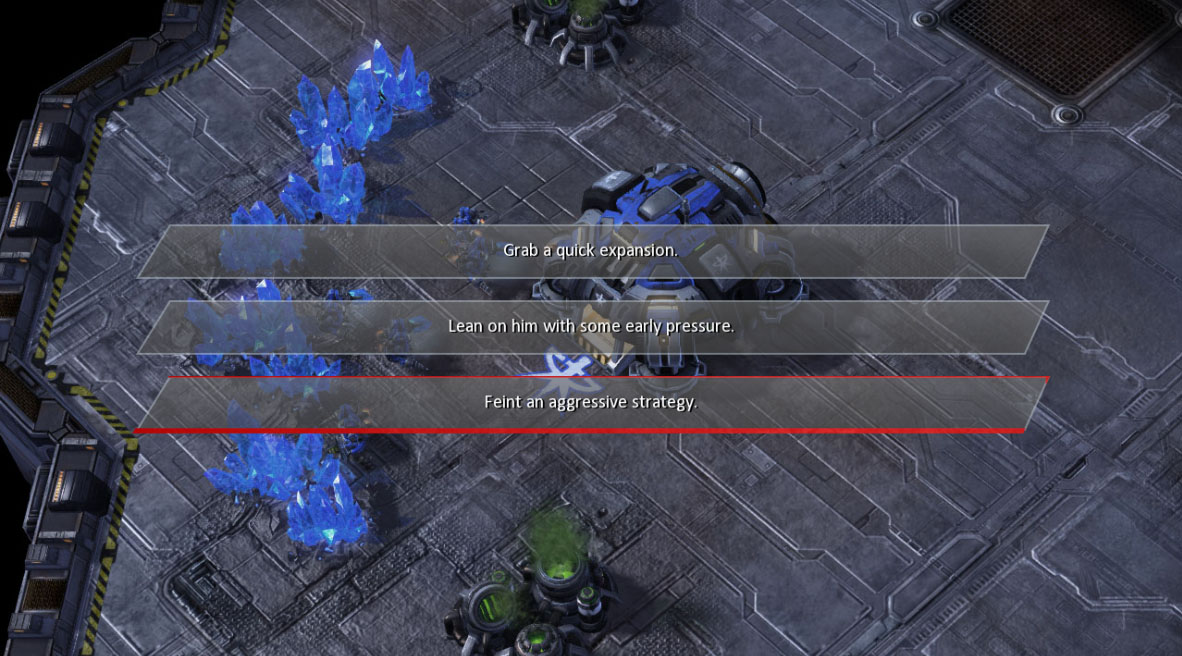 You won’t always be able to, though: to simulate how big of a mistake it is to hesitate in a serious game, sometimes the game will proceed without consent or warning and shut down the choice boxes, because guess what– while you were thinking, the other player was making over 300 actions per minute. TeamElevenEleven managed to abstract the experience of StarCraft II to a point where anyone can get how the game works– and, most importantly, it’s not done for any purpose other than the story. If sometimes the text is automatically skipped, it’s only to make you think and react at the same speed as Mach, bringing both of you closer each time. Each match you “play” has something at stake for Mach and other characters, and the choices are not always just about winning or not. I want to call attention to the match versus Reva in particular, that has more to it than just the act of competing. It envolves ethics and what you are actually looking for while playing. 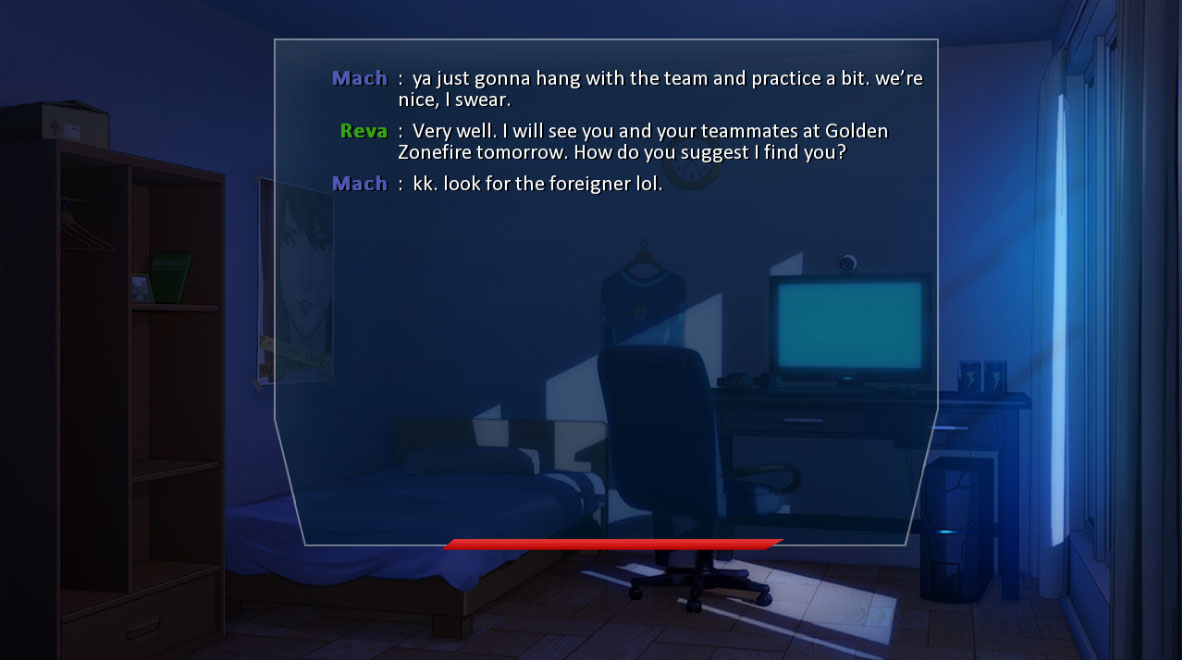 Reva is an amazing character. This is both good and bad for SC2VN. I’ll clarify: although I said SC2VN is very much about StarCraft, it is also very much about its players and that, inevitably, involves making friends – even moreso when you consider tournament matches are usually played in teams (one-on-one matches where whoever loses is replaced by a teammate). So the hope for you and Mach to become a professional StarCraft II player is reliant on your ability to join or form a team, and a lot of the visual novel revolves around that. You’ll find that all of the characters have a lot more to them than you’d assume at first glance, their personalities having enough depth that their declared playstyle their sole descriptor.
So although the Terran playstyle tells a lot about how Reva acts in real life, a night of hanging out and a drinking game with the team is able to reveal other sides of Reva’s personality. This makes the team dynamic incredibly pleasurable, since the fact that they get to talk about pop culture or something other than the game for which they share a passion is actually relevant to their development and to the story, besides being entertaining in and of itself. 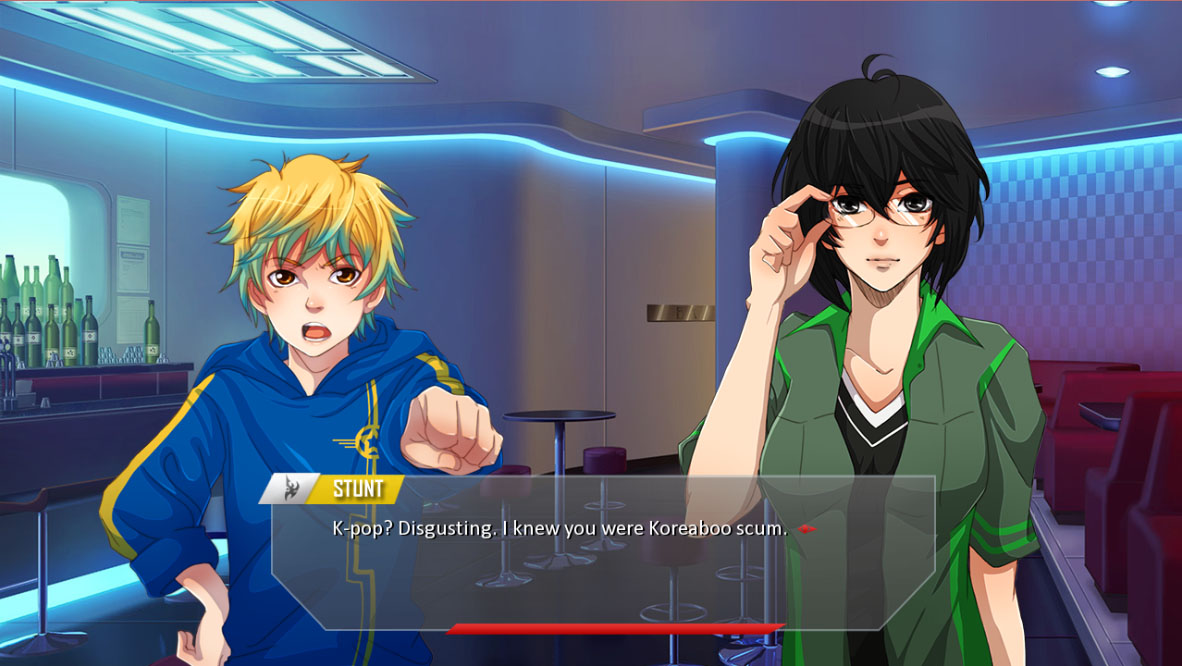 But, see, this makes SC2VN touch subjects that never get expanded upon. Beyond competition, the visual novel asks if it’s worth doing something you don’t love just because it’s the only thing you found yourself brilliant at; how blurry is the line between self-torment and self-indulgence and how we are always using them to excuse ourselves from commitment; is there really that much difference between a huge, self-righteous ego and a retracted, hurt ego; why should you keep going if you’re no longer the ace you used to be; how much and in what areas the gender difference affects the media and marginalizes women – the characters express these themes masterfully, hitting much closer to home than I suppose most people would expect from a game about another game. And the problem is that these subjects never come back to bite you, Mach, or anyone.

There really isn’t a problem with not doing something. I mean, one isn’t supposed to evaluate a visual novel from the perspective of what it could have been. The problem here is that these questions become a haunting whisper that surrounds the whole scene and culture, not only of StarCraft II but of any competition or even anything we put our minds to. So even in the best ending, in which Mach triumphs with his or her teammates, there’s a bitter, doubtful, unwelcome aftertaste that doesn’t seem intentional. It’s as if SC2VN stopped at the end of a common route of sorts, leaving us desiring to know more, to play more and to see what’s going to become of the characters.
So, in conclusion, SC2VN is a thrilling visual novel, one of the few that uses its directing to instill actual anticipation and excitement in the player, with incredibly and immediately likeable characters, solid writing and adequate artistic assets – sound design deserves an honorable mention for building ambiances that match the perspective of the backgrounds! But while the loose ends are a part of what makes it so strong, they also end up making the experience feel incomplete or, at least, make you chew on your lips when you think back to them.

+ Great storytelling that uses the resources a visual novel offers

- Music can get repetitive