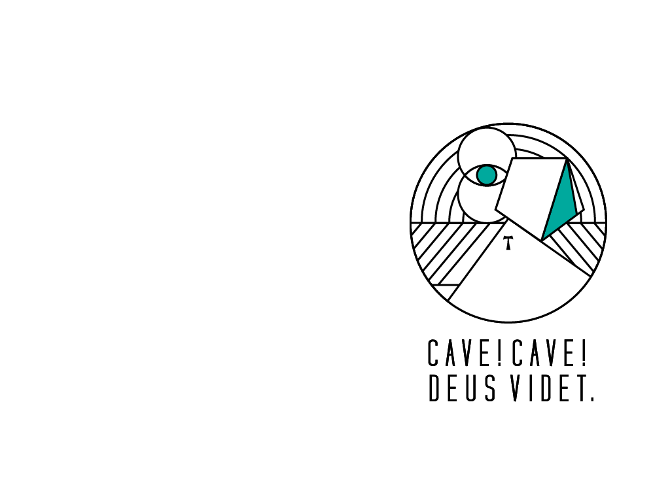 There is a notion amongst the visual novel community that visual novels are about visuals and story, “hence visual novel!” The music lover will step out and claim the soundtrack constitutes a large, in fact the largest part of why we love visual novels. Someone might point out that choices and more complex forms of interaction are what set visual novels apart from other storytelling mediums or games, depending on which side of the “are visual novels games?” contention they stand on. Regardless, most people will agree that these are all elements that serve each other, the story probably being the one to be served, in order to create a meaningful experience.

This isn’t the case with Cave! Cave! Deus Videt: Episode 0, developed by We Are Müesli and released in 2013. 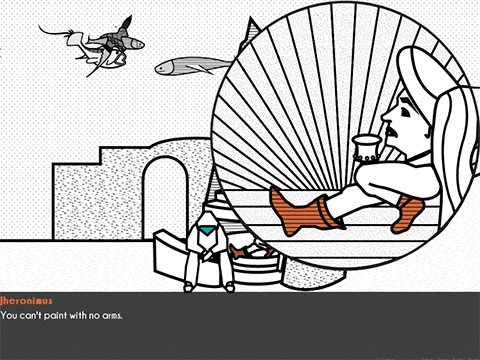 Well, I know a girl from the visual novel next door who would disagree

There is narrative and there are visuals, as well as music and choices. The thing is, they hardly serve each other. You could say the story and the visuals are one, which is only natural for a visual novel based on paintings – the game revolves around Jeremy Bosch’s work, conceptually and story-wise. There is little narration – you have to rely on the art and the dialogues to understand what is going on. Sometimes, however, you don’t need to – Cave! Cave! Deus Videt is not trying to tell a story – or, at least, not in the traditional sense. Its storytelling is more centered on a circular pattern then a linear sequence of events.

That is to say stuff happens, only to happen again later, in another context. This may be confusing at first, but if you take it as a projective psychological test provided for educational purposes, you’ll understand what the game is really trying to say. When you consider that the main art style hardly tries to resemble what it’s representing, along with the minimalist sound design that conveys feelings before it conveys ambiance, and a high-pitched and somewhat eerie soundtrack, this notion is reinforced. Sometimes you just don’t understand what is going on on-screen.

That’s when Cave! Cave! Deus Videt will ask you what you are seeing.

This screenshot is from the very beginning of the game, right after a chopped voice says that you’ll undergo a projective psychological test for educational purposes (which you can refuse). At some point, it’ll claim your phone is generating interference. You’ll then be introduced to the situation: Hoodie, a high school student, disappeared during a school trip to the Museu Nacional de Arte Antiga at Lisbon. His teacher is at the police station, being questioned about the incident. Then, you’re introduced to the protagonist – Hoodie himself, four hours earlier.

While at the museum, Hoodie meets a Stranger who, among other things, tells him his phone is generating interference. Due to the circular logic that the story follows, there are a lot of small recurring events, sometimes triggered by your choices, that give off the feeling that the game is always playing a prank on you, a feeling very  near and dear to those who have played Earthbound. Like there’s someone watching and the game is reacting to you on a visceral level. Thus, it would be weird to evaluate the characters in Cave! Cave! Deus Videt, since this visual novel is as much about you as it is about Hoodie.

What actually happens and what is just a figment of Hoodie’s (or your) imagination becomes unclear very quickly. But it hardly matters. At some point, the Triptych of the Temptation of St. Anthony – the painting Hoodie most wanted to see – will be the subject of a puzzle of some kind. Either that or you’ll have to face a quiz about Bosch’s life. As much as these puzzles are projective psychological tests provided for educational purposes, since you end up learning about the symbolism in the painting or the painter’s journey, they also carry the story on in a way that only they could, since they are also about Hoodie and, ultimately, they are about the player and how they see the world. This is clearly demonstrated the juxtaposition of close-ups of Bosch’s paintings and scenes of the game.

There’s something deeply narrative about how the art style changes all the time. There are a few animated sequences and a delightful scene in which they inserted a clip from an actual old movie, and changed the intertitles so that they’d be a scene in the game instead of, well, clips from a movie. It’s quite funny, actually, and pretty inventive too. But most importantly – these changes are how the visual novel reaches out to you, not to tell you a story, not to please you aesthetically, but to effectively talk to you about art, reality and other such themes.

Ironically the parts in which Cave! Cave! Deus Videt most obviously tries to address you are the most boring ones. Remember I mentioned a quiz about the Triptych of the Temptation of St. Anthony? Even though you’re warned beforehand that it’ll be a chore, that doesn’t stop it from being one. They are there specifically to teach you or to test your knowledge about Jeremy Bosch’s life and work, which is a terrible thing to do when the game shines so much while doing its own thing using Bosch as a theme, not as an object.

This minor complaint doesn’t annul Cave! Cave! Deus Videt. Episode 0 being just the kind of game that is an insight on what we can do with visual novels – besides, of course, being one hell of a visual novel itself. Sometimes it’s the kind of intellectual pleasure that makes you smirk and go “well played”, but sometimes it really freaks you out because, quite frankly, that’s what Bosch’s paintings seem to do.

+ Will make you laugh

+ Impressive use of animation and movie inserts