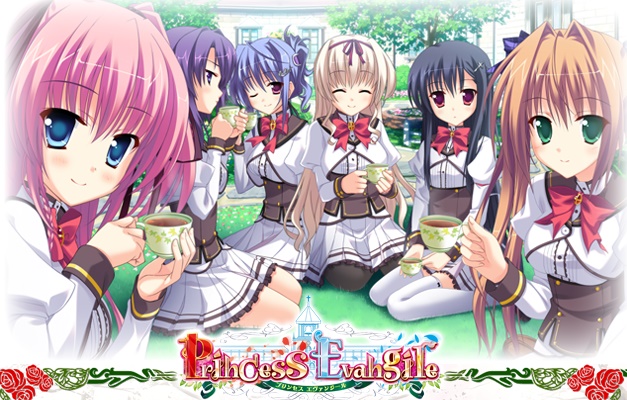 Originally released in July, 2011 by Moonstone, and translated by Mangagamer earlier this year, Princess Evangile is a slice of life romance Visual Novel with a lot going for it. It’s your typical romantic-comedy-drama story – mostly – based around the protagonist, Masaya Okonogi. He’s in a whole world of hurt thanks to the massive financial burden his father – who conveniently disappears – left him. With nowhere to go and at a loss for what to do, he has a chance encounter with a girl in the city. She calls herself Rise Rousenin, and she ends up asking him to enroll in Vincennes Academy, an all-girls school, as a test for gender integration in the future. He must win over “The Premier Judgement” by getting a majority vote in the short time that he is there. That proves to be quite the challenge after the unwelcome reception he gets! 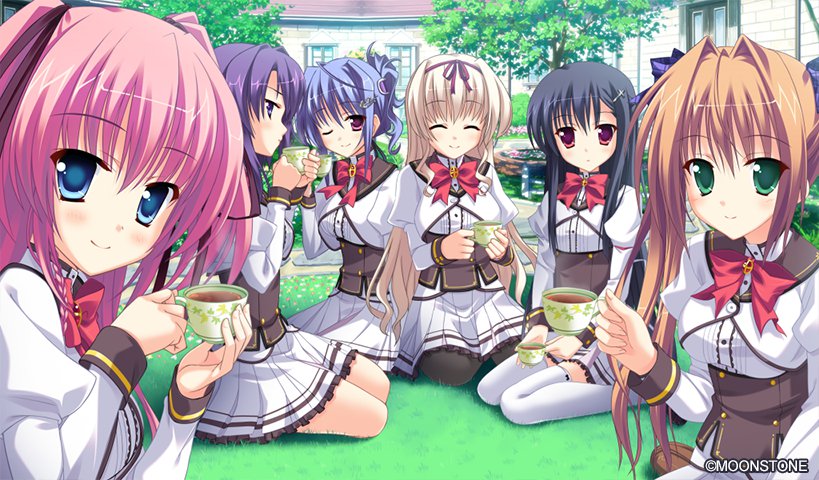 After enrolling in the academy, he meets the leader of the society dedicated to keeping things at Vincennes the way they are, Ritsuko Kitamikado, her sister, Ayaka, and reunites with his childhood friend, Chiho Sagisawa. Together with Rise, Masaya sets out to make a good name for himself not only to leave a positive impression of himself on the academy board, but to be allowed to stay as well. Filled with hijinks and misunderstandings, the common route is sure to give you a good laugh or two while setting up the plot.

The story is divided into chapters and simultaneously has calendar days like we commonly see. It was pretty well written in that it flowed nicely, POV transitions were easy to identify, and the whole overarching story was just… smooth. It was a pretty lengthy story, which I liked, and it felt like I was getting my money’s worth in that respect. Probably the only thing story-wise I found to be a little bland was the choices. Generally, I prefer choices to have some meaning and change the story accordingly, but they did nothing to add to the plot, and served almost exclusively to identify which route you’re choosing. It also doesn’t venture off the beaten path very much, either, but that’s not necessarily a bad thing. “Don’t fix what isn’t broke,” they say.

The music and the art are the most important aspects of VNs to me, and this game did not disappoint in either category. Princess Evangile had some really good musical scores, especially the heroine themes. They fit the personality of each route, and that’s something a lot of VNs forget about. Ditto with the artwork – the backgrounds really gave off the “rich girl private school” vibe, full of fancy architecture, tall buildings, and a chapel to boot. Very fitting! 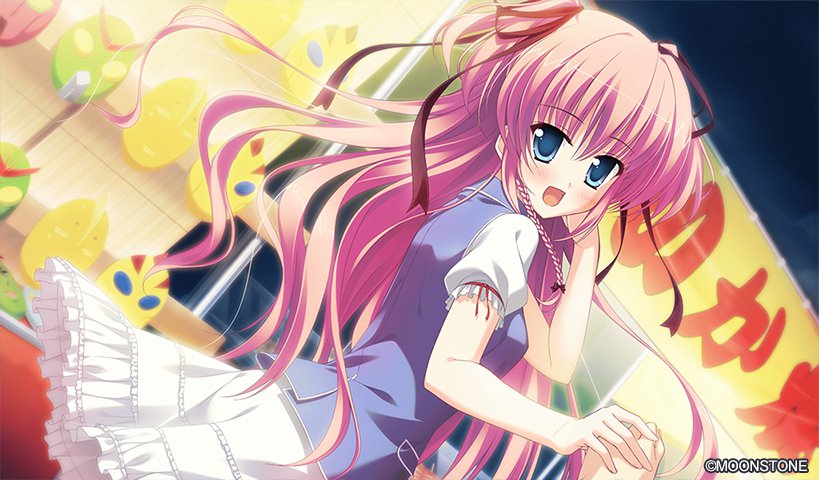 There are a total of four routes, one for each heroine. Each of them deals with the heroine in question’s personal traumas, and some of Masaya’s as well. It does a great job at still feeling like a lighthearted slice-of-life story while taking a serious tone when necessary. The characters involved all had their individual quirks that made them likeable and stand out. It’s hard not to get invested in a character emotionally when they have so much detail put into them. The dialogue felt mostly genuine, and, might I add, very cute. Definitely read Ritsuko’s route – the quiet types are always the most adorable. The stories end on positive notes, and all of the loose ends get tied up quite nicely. While there is nothing groundbreaking in this game, Princess Evangile is a great read overall. Take it for exactly what it is – a typical romance story with emotional rollercoaster routes, and you’ll definitely enjoy it.

Pick the 18+ Version up from Mangagamer!