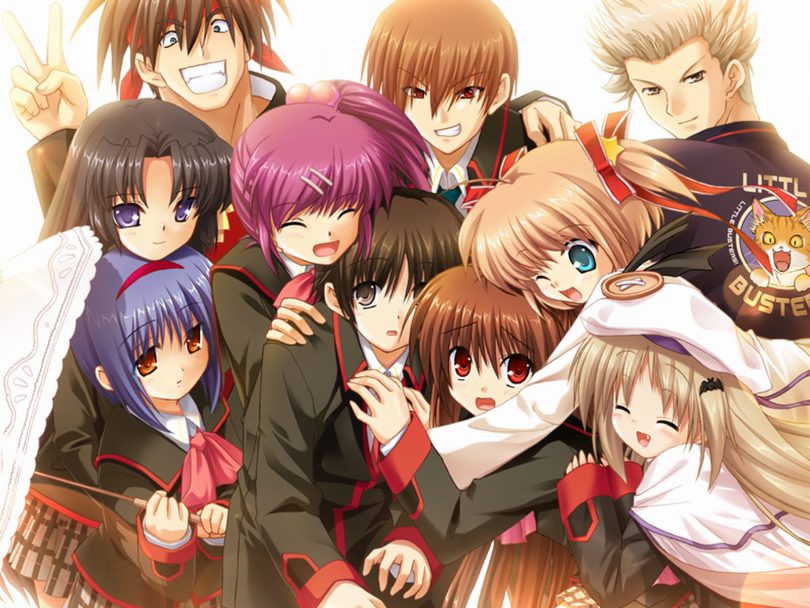 VisualArt’s Key brand is a well-known, well-regarded brand in the West. With many of their works receiving good anime adaptations from Kyoto Animation, Aniplex, and JC Staff, Key might just be the most well-known VN developer ever. Little Busters! is the most recent Key VN to get the anime treatment, and has received lots of attention in the past couple of years, but is it truly worth the hype?  Here’s what I think:

Little Busters! has a fantastic opening. In quick succession, we are introduced to our princpal protagonists: Riki, Kengo, Masato, and the brother-sister duo of Kyousuke and Rin. They make up the Little Busters!, a group of friends that have been inseparable since childhood. Within the first few minutes, we also discover the natural hierarchy of the group. Kyousuke acts as the leader, often mediating conflicts and coming up with activities to fill their free time. Kengo, the most distant member of the group, is the calm, cool, and collected type until Masato, the group clown, tries to pick yet another fight. Rin is the quiet yet ferocious type that often puts Masato in his place, often violently. That leaves us with Riki, the newest member of the group, and our protagonist. Kyousuke has returned to school, causing a major ruckus on the campus. One thing leads to another, and Rin ends up fighting Masato in a battle set up by Kyousuke. This serves as our introduction to one of the Little Busters! mini-games, a randomized battle/fighting game type thing that ranks you based on your performance. Rin easily dispatches Masato using her weapon of choice, a cat. It’s an entertaining opening that does a very good job of setting the scene of this VN.

The gang then wonders how to spend their school year, until all of a sudden Kyousuke decides to put together a baseball team. In order to do this, however, he’s going to need more members to fill the roster. This is where we are introduced to the remaining members of the Little Busters! gang, but it’s also at this point where things start to go downhill. And they go downhill very fast. Once all of the characters are introduced, the common route really kicks into gear. What starts off as a cute little story about building a baseball team turns into the story of a large group of friends and their daily random activities throughout the year. On their own, many of these little activity arcs are rather enjoyable. But, since this is a Key work, it all makes the common route extremely long. While all of the characters are enjoyable at first, they end up turning into one-dimensional generic character archetypes. Yes, they each have individual routes that give them more depth, but the shenanigans they get up to in the first few hours don’t change in the next twenty. 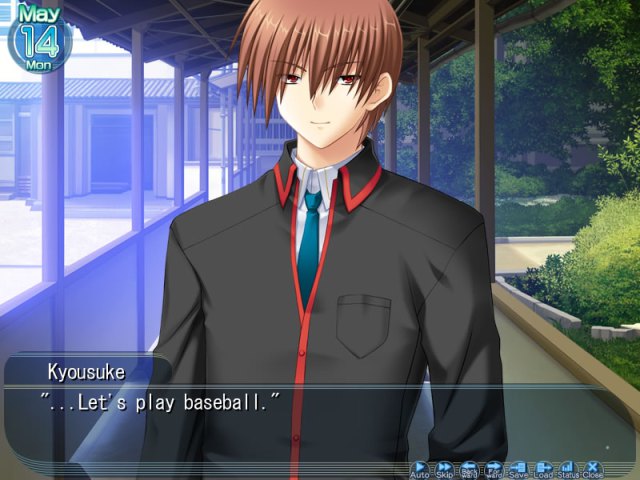 The one thing that breaks up the monotony is the baseball mini-game. In this mini-game, you and your friends train for the big game Kyousuke arranged against the sports club. It’s as simple as clicking a button to hit the ball Rin pitches to you. Hitting the cats that roam the field or other characters will raise the stats and abilities of your teammates. This can take place either once or twice a day, depending on your choices. Despite all this practice, it’s unlikely that you’ll win a baseball game until your second or third playthrough (some stats carry over from your previous playthroughs), but it still remains an enjoyable diversion to an otherwise monotonous common route.

Part of the issue with the slow common route is our protagonist, Riki. He has too much common sense for his own good, and his fruitless attempts to keep his zany friends grounded comes across as whiny and annoying. He is weak, quiet, and is just…really boring. Now, thematically, this fits perfectly, but something fitting the context of the story does not automatically make said story entertaining. However, Riki does become a bit more interesting during various routes with the other members of Little Busters!, but as a whole the routes are very hit or miss in terms of enjoyment. Most of the routes start off great, but the central conflict feels very forced in some, and very unimaginative in others. That’s not to say that all of the routes were weak, a couple served as good reads. Overall, the routes suffer from poor, generic writing that is done to force the “feels” out of the reader. It’s cheesy, bland, and in some cases, a near parody of pre-existing works (anyone see Groundhog Day?). 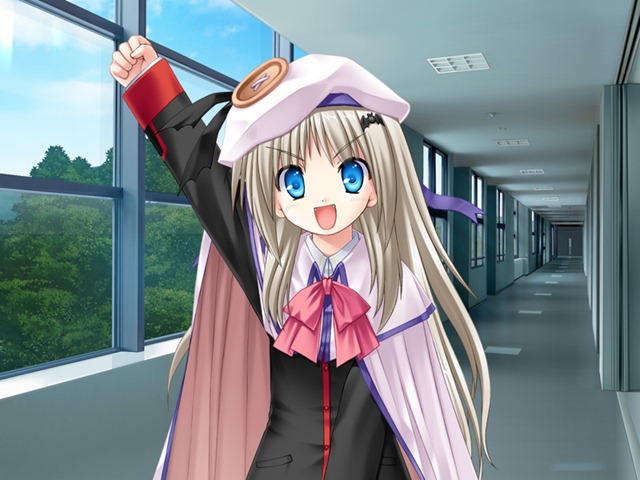 Now, being a Key work, there is naturally a “true” route. In this case, that route belongs to Rin, and there is an obvious difference in quality between it and the other routes. Riki becomes an interesting and fleshed out character, and the story takes some intriguing steps forward. However, and I don’t know if it’s due to a poor translation, poor writing, or both, Rin never really grows as a character throughout the course of the VN. Sure, she talks a little bit more with everyone, but we don’t really see much evidence of this, instead relying on the game to not-so-subtly tell you she is changing. Upon completing all of the routes, a new chapter of the VN opens up: Refrain. Similar to Clannad -After Story-, Refrain contains the true ending to the VN, and is far and away the highest quality portion of the story. The side characters take a back seat to Kyousuke (who is arguably the most interesting character of the group, and one with far too little screen time), Riki, Rin, and Kengo. Refrain, similar to the VN itself, gets off to a strong start, flipping many things from the early readings of the VN around. We see a new side to the original Little Busters! gang, and the glut of side characters make only minor contributions.

However, it ultimately falls short of redeeming such a poorly constructed VN due large part to its ending, which is a slap in the face to the reader’s emotional maturity. It is so forcibly happy that all the sacrifices and conflicts in the story suddenly feel pointless, and I felt like I had just wasted nearly 40 hours of my time. Had Refrain ended at a different notable part, this review would probably be completely different. Ultimately, Jun Maeda, the writer for Refrain, falls back on a tired trope that feels more lazy than anything else.

There are other aspects to consider with Little Busters! though, like the music, which is fantastic. The background tracks usually fit the situation and were very good, and many of the vocal tracks are amazing, especially with their timing. Even if some of the routes were a complete mess, these will still tug on your heartstrings. Definitely pick up and listen to the vocal soundtrack sometime. The art duties are split between Itaru Hinoue and Na-Ga (of Angel Beats fame). The style difference is a bit jarring at times, and so is the quality. Hinoue still has issues with hands and sleeves (though her Holy Breaker and Rewrite art shows that she’s improving), while Na-Ga’s characters just seem flat, and not in terms of their chest size. Many of the characters just lack perspective or depth. The CG quality is enough to get by and not draw too many complaints, save the aforementioned issues.

Little Busters! has flashes of being a good VN. It even shows glimpses of being a great one, but the writing is just too inconsistent, fluff-filled, and long-winded to maintain any sort of interest. Many of the plots are forced, cheesy, and the true route lacks a decent resolution, electing instead to appeal to the widest audience possible by sucking out all of the emotional drama that had built up. Little Busters! is not a good VN. It’s a mediocre VN with great music and tolerable art, but poor writing and poorly constructed characters.

We would like to apologize for the original draft of this review.  It had been rushed to meet a deadline, and did not receive the usual amount of love we give all of our reviews. ~9/9/15  2:51PM CST