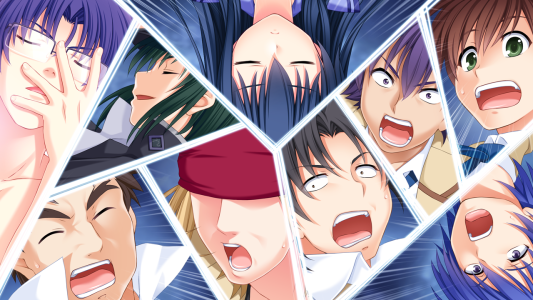 So most people probably know, but back in 2010 Key collaborated with P.A. Works to produce an original anime titled “Angel Beats!”, written by Key’s Jun Maeda and with character design by Na-Ga. It was only a short 13-episode series but thanks to Key’s popularity, it ended up being pretty successful, so a few years later Key decides to turn it into a Visual Novel, which would hopefully fix the problems people had with the anime and also expand on the story.

Angel Beats! 1st Beat was released back in June, being the first in a series of 6 games that will have a route for every core member of the cast. Although 1st beat only includes routes for Iwasawa, Matsushita and Yui, and no release date has been given for any of the others.

Angel Beats follows the story of Otonashi Yuzuru after he wakes up in an unknown location suffering from amnesia and next to a girl named Yuri, who tells him he’s dead and this is the afterlife. Otonashi then realizes he’s really in the afterlife after his meeting with the mysterious girl Yuri and her group call “Angel”,…