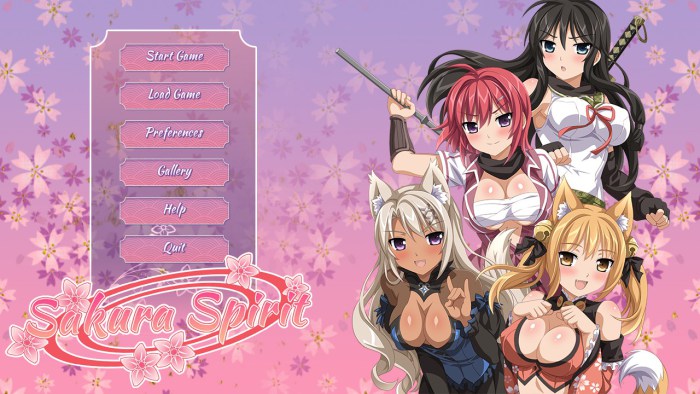 Sakura Spirit, an original English language visual novel by developer Winged Cloud, was a huge hit on Steam last year, no doubt thanks to its abundance of fanservice and shiny anime boobs. But does it go beyond that?

The short answer, unfortunately, is no, it doesn’t.

Protagonist Takahiro is getting ready for the judo fight of his life, and when he goes to an ancient shrine in the forest to pray for luck in the competition he’s suddenly magically transported to another world. There he runs into two foxgirls, Machiko and Maeko, who are in the middle of stealing panties from two warrior girls, Narumi and Miyu. Hijinks ensue as he ends up stuck in the middle of the girls’ fight and eventually becomes a mediator between the human village and the animal-girl spirits.

First things first, the plot here is paper-thin, silly, and very, very rushed; finishing both routes and unlocking all the CGs only took me around 2 hours. It’s an unoriginal mix of anime clichés that never even makes an attempt at creativity. It does aim for comedy, but it only occasionally managed to raise a smile from me, with most of the jokes being immature…