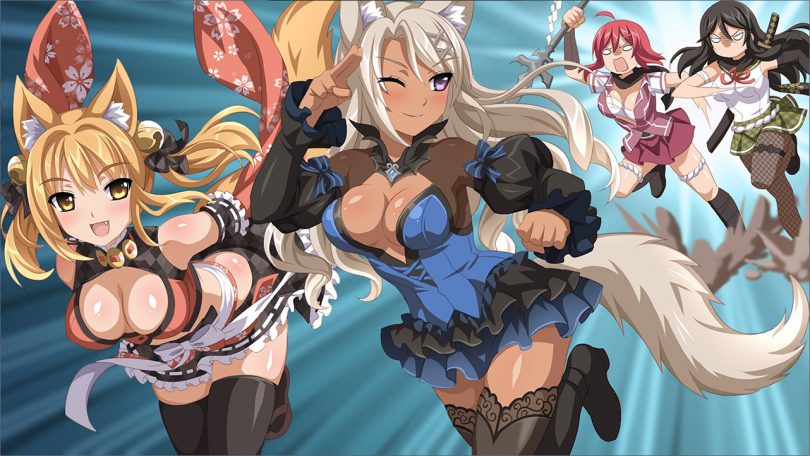 It falls upon me to review the now infamous “Let’s Play” bait OELVN, Sakura Spirit. The VN, by Winged Cloud has certainly stirred up a storm due to its pseudo-nukige style and received plenty of attention when Twitch banned it, and its spiritual sequels from their streaming service. None of this has any bearing on its quality though, and perhaps behind all the scrutiny is a good VN.

Sakura Spirit opens with 17 year old Gushiken Takahiro, a top rated judo athlete, preparing for a competition to represent Japan in a world judo tournament. He does this in a cliche anime way; by oversleeping and being awoken by his younger sister. His sister notices that Takahiro is nervous and tells him of a shrine people pray at for good luck. Takahiro decides he’s got nothing to lose by doing so and presses his friends at school for details. The shrine, it turns out, is hidden deep in the woods. Making it to the shrine, Takahiro goes inside to pray. When he does this, a scantily clad woman appears, and sends him to a world that “needs him”. He blacks out and when he wakes up, he hears women screaming and yelling in the distance. He races to find out what the commotion is, and sees two fox girls, silk underwear in hand, being chased by two women. 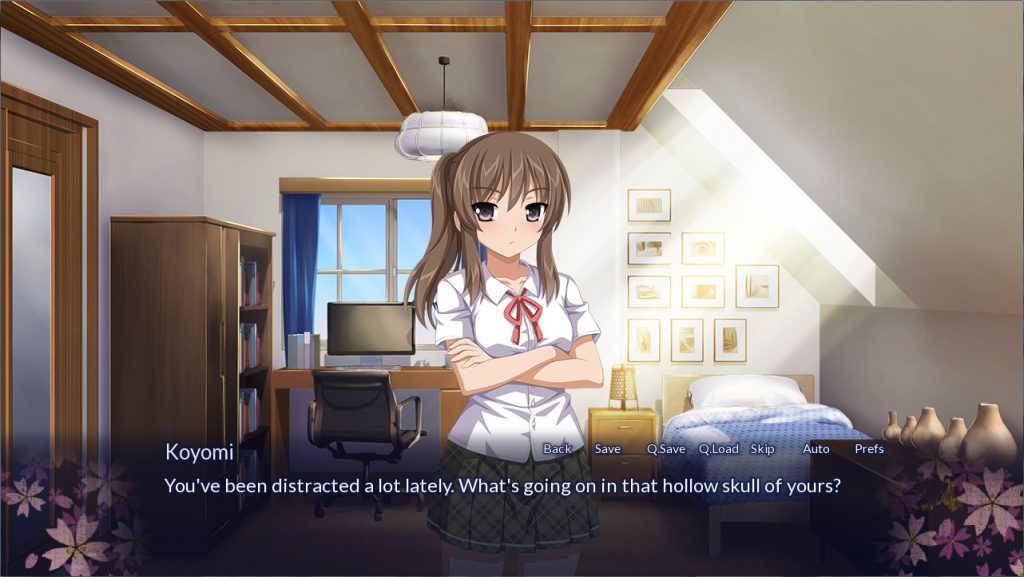 Everyone is showing cleavage too. This isn’t important to the plot, but is very important for people who care about Plot. From here, the story progresses into misunderstandings and more misunderstandings. In fact, the entire point of conflict is a misunderstanding. The story structure is basic. Takahiro gets some alone time with all of the girls in one way or another, is treated to them being nearly naked, and if this VN were even .01% more lewd, there would have been full blown sex scenes. Through the various girls being nearly naked, they open up a little about their past, and Takahiro helps them overcome some problem they have in a matter of minutes. The story obviously isn’t the point here, and is very bare-bones. However, it does maintain a certain sense of enjoyment as it is simple, to the point, and wastes very little time. 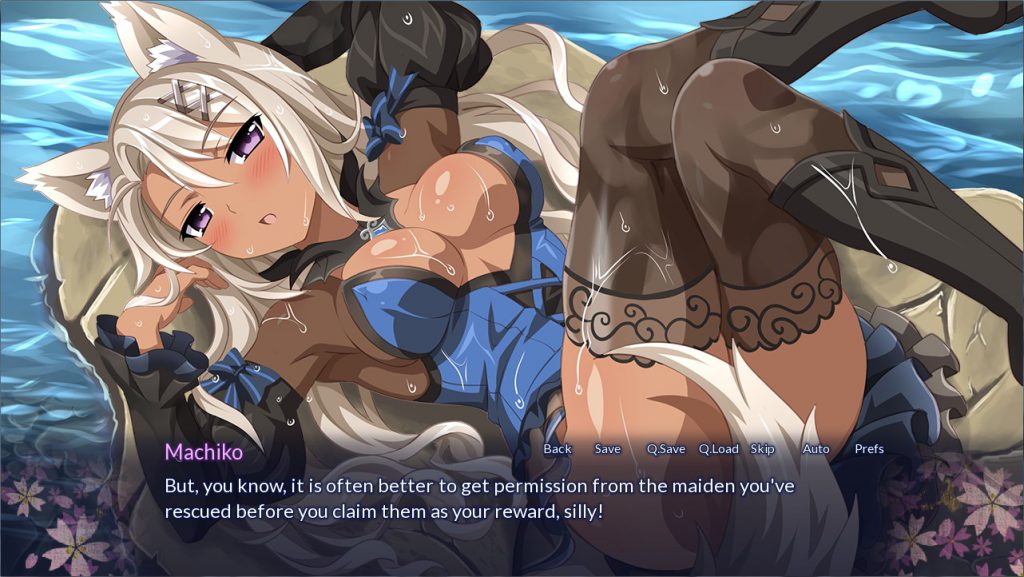 One of the common complaints I heard when Sakura Spirit was released, was the poor grammar, spelling mistakes, and awkward mechanics. I personally tend not to notice small spelling errors, and small grammar errors typically go unnoticed by me. In my reading, I did not notice anything major in terms of issues on those two fronts. What I did notice was awkward sentences that I had to reread a few times to understand. That is more of a writing sin to me than a spelling error or two, or using the wrong punctuation. A VN needs to read smoothly so that the reader is not pulled out of the story by having to reread lines again due to clunky, awkward writing.

The art is professionally done, and of very high quality, only ruined by bust sizes large enough to have a gravitational field. The 4 main girls all have very distinct looks, befitting of their personality. Maeko is cheerful and playful, and looks that way sporting shorter, twin-tailed hair and a constant smile. Her older sister, while playful and teasing, still manages to act elegant and more mature, and again, she looks just that way. The main villains of the VN don’t look as good for one simple reason. They all look the same save for a color change. It is a little lazy, but it could work in the context of the story. 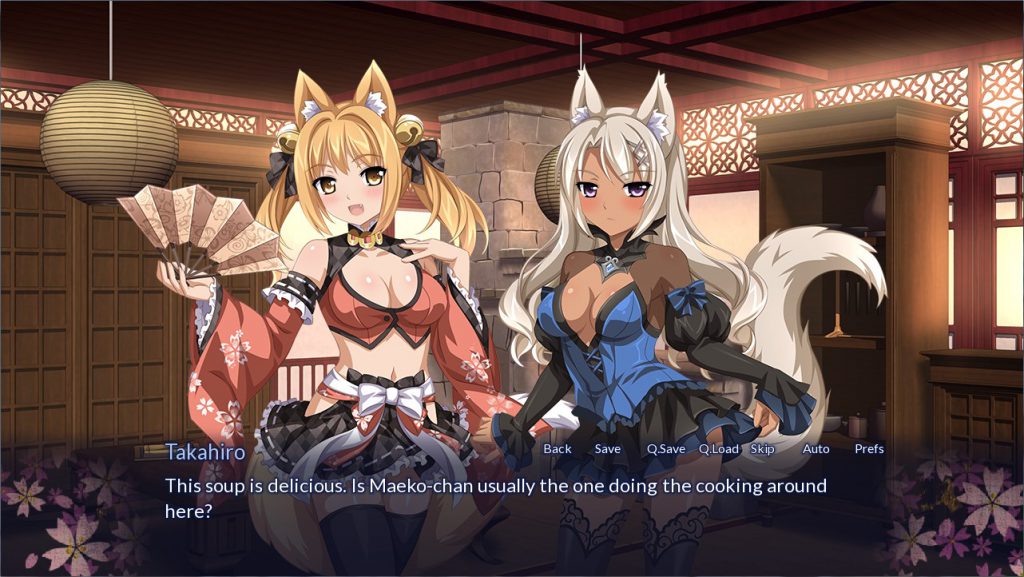 Music is sometimes the hardest part to review in a VN. For the most part, the music is forgettable and very rarely does it stand out or add to the narrative in a meaningful way. Sakura Spirit falls in the former category. It cycles through maybe 3-4 pieces, all of them generic tunes, over its short run time. The best thing that can really be said for the music is that it typically fit the scene and did not ruin anything. It should be noted that the music that plays during a more lewd scene is laughably cheesy.

Sakura Spirit is a generic, cliche, rather boring OELVN. Its main goal is to show off as much skin as possible, without crossing into the pornographic category. The story is brisk and bare-bones, giving the reader only what is needed to advance the plot while the art acts as the main selling point. I cannot in good faith recommend this VN to anyone really. If you want porn, there are much better VN options out there and if you want story, there are also much better VN options out there. This VN just seems like it sits in the middle, unable to do either very well. As a joke buy, or gag gift, I can recommend this VN because it is just barely decent enough to actually say it might be worth it, but only if it is discounted by at least 50%. All in all, the art is the sole saving aspect here.

+ Story does not waste time