Ever17: The Out of Infinity is a visual novel made produced by KID that was originally released in 2002 for the Playstation 2 and Sega Dreamcast. In 2003, KID released the novel on PC and Hirameki International brought the game to the United States 2 years later. Thank goodness they did. The VN is part of a larger series called the Infinity series. Other novels in the series include, Never7: The End of Infinity, Remember11: The Age of Infinity, 12Riven ―the Ψcliminal of integral―, and Code_18 (Code_18 was not made by KID, nor written by any of the KID staff.). The series is made up of separate stories with recurring themes and theories. Of the entire Infinity series, Ever17 is the only one that ever made it over seas to the United States, though fan translations exist for Never7, and Remember11. Ever17 begins with you, the player, attending an underwater theme park called LeMU run by Leiblich Pharmaceutical, which is located 51 meters under the ocean. During a normal day at the park, an accident takes place and the park is evacuated as half the park is flooded. Everyone makes it out, except for a few individuals who become trapped in the theme park. LeMU is now under constant threat of implosion due to the water pressure which is slowly, but surely crushing the complex. The trapped people now have to hope for a timely rescue to come from the surface. However they soon discover that there is more to LeMU than meets the eye. 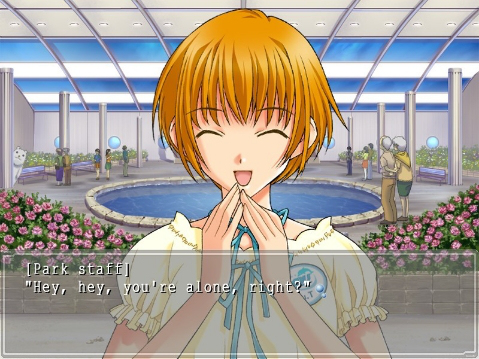 During the opening scene (up to the moment of the accident), the players perspective will change between Takeshi Kuranari and a nameless character called Kid. Once the accident takes place, the player will choose whose perspective they want to follow, Takeshi’s, or Kid’s. Both share some characters in common, but have some major differences between them. While playing the routes, the player will choose between one of two girls to find out the back story of (Sora and Tsugumi for Takeshi, You and Sara for Kid.) and discover more of the mystery surrounding LeMU. The characters begin to unravel the different mysteries as the novel goes on, including the true nature of existence itself. Being a sci-fi mystery, Ever17 throws out some complex terminology at times, from the Archimedes Principle, to the Third Eye. The novel does a good job explaining all of the concepts thrown out, but sometime delves a little too deeply into the explanation. For example, there is a hologram that is something of a key story piece and we are treated to a long explanation of how the hologram works. While it adds depth to the story, it also breaks the flow of the narrative somewhat. This is a minor complaint though since the explanations are still helpful regardless. Fans of sci-fi should thoroughly enjoy all of the explanations as well. 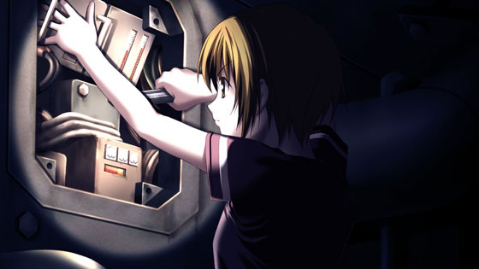 This brings me to my next point on Ever17. The writing. In short, its fantastic for the most part. Each of the 4 main arcs start off in very similar fashion. Takeshi’s arcs both start off the same, as do Kid’s. This is a bit of a problem as the stories remain the same for 75% of the routes resulting in re-reading or flat out skipping previously read text. However, the last 25% of the 4 main arcs is completely different and usually filled with all sorts of plot twists, twists that set up for the true arc of the novel. The endings of each arc are extremely well-written and full of hints and clues allowing the reader to try and come up with his/her own theory of what is taking place.

Once each of the 4 main arcs are completed, a 5th arc is unlocked. Unlike the first four, the story shifts back and forth between Takeshi and Kid. The 5th arc also features a much different set of events as we finally see the mysteries of LeMU come to light in spectacular fashion. One mystery after another is solved, and yet more pile up. Impressively enough, these plot twists and answers make perfect sense. They don’t simply come out of thin air. The first four arcs drop hints and clues the entire time, and the answers come in the final arc. You won’t usually be blind-sided by a mystery being solved. In the end, it makes sense. It’s simply great writing by the KID staff in creating a complex mystery that doesn’t rely on random assumptions and unexplained plot devices. Tying into the solid writing are characters. The interactions between all of them are great, and they make for a highly intriguing read as you try to piece together what each character may know about the events surrounding them. As you read, more and more questions about them pile up, and luckily, you aren’t left hanging on very many of them. It is plenty of fun to attempt to guess the answer to many of these questions the characters’ motivations. 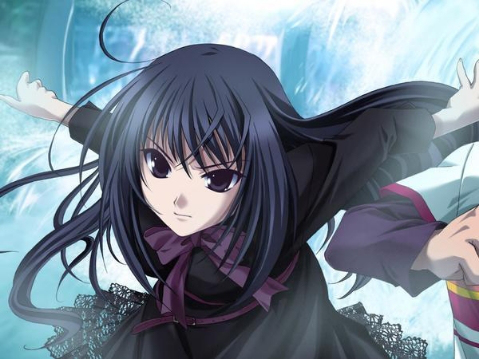 But all of this would be for nothing if our two main avatars, the characters you play as, weren’t equally as interesting. I’m happy to report that both Takeshi’s and Kid’s perspectives are very interesting. Takeshi’s is a little bit more focused on the people around him, whereas Kid is more focused on himself and his apparent amnesia. Takeshi is simply visiting LeMU for the day with his friends while Kid simply doesn’t know why he is at LeMU. His memory starts from sitting on a bench at LeMU. He doesn’t even remember his own name. That caused me to have more interest in Kid’s story and perspective, while Takeshi’s was more of an emotional perspective. In the end, Ever17 is a fantastic experience. A great cast of characters, coupled with a deep, complex mystery easily made it one of the most engaging, thought provoking stories around. While the early and middle parts of the first four routes can be monotonous, the end pay off is much more than worth it, and the final route is a mind blowing experience full of twists and turns sure to keep you on the edge of your seat. Ever17: The Out of Infinity is a visual novel that will keep you guessing and leave you with a great deal of satisfaction upon completing it.