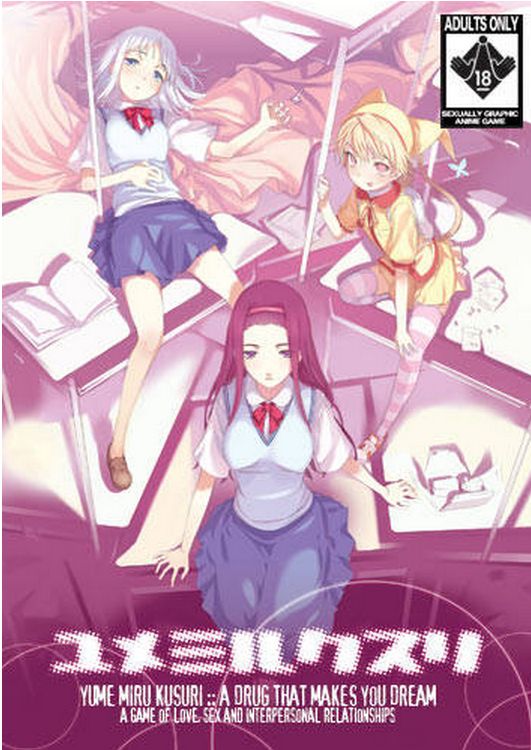 I have been playing VNs for nearly seven years now.  I never thought I would enjoy video games that were simply text and pictures, but that all changed with Yume Miru Kusuri.  This was the first VN I ever played.  I found a copy of it (and only it, nowadays it’s packaged with Little My Maid by JAST) at a thrift store for $5, and I decided to purchase it.  I installed the game later that day, and the next morning, I was finished with my first ever route.  And from that day on, I’ve been hooked.

Originally released right before Christmas in 2005 by rúf (a now-defunct subsidiary of Will), and released in English by Peach Princess (a subsidiary of JAST) in 2007, Yume Miru Kusuri ~A Drug That Makes You Dream~ is actually pretty generic in terms of content, but its quirks lie with its cast of characters and situations that range from the tame to the downright insane.  It’s a great coming-of-age story that explores some pretty deep themes, and it’s definitely worth your time.  Here’s why. 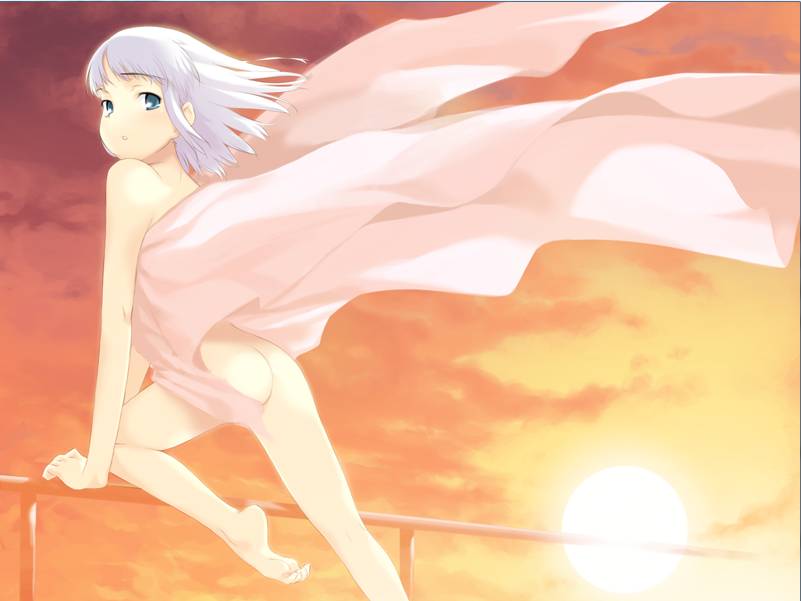 You play Kagami Kouhei, your run-of-the mill high school student who tends to keep to himself.  You have a part-time job at a convenience store, and overall, you’re perfectly happy just living your life, until one of three different girls catches your interest.  Perhaps it’s Shiraki Aeka, an outcast classmate of yours who is the victim of some rather intense bullying.  Or perhaps it’s Kirimiya Mizuki, the Student Council President who is very interested in pushing you to your limit in more ways than one.  Or maybe, just maybe, it’s Cat Sidhe Nekoko, the catgirl “fairy” who just really wants to go back home.  Each of the characters has their own unique set of “issues,” which is an integral part of the VN as a whole.  I was able to draw a lot of connections between this game and some of the stuff I saw – or had to deal with – while I was in school, so that made the game a lot more real to me.

But the game is more than just you dealing with these “issues.” You also develop romantic relationships with all three of them, and there are plenty of H-Scenes to cater to a lot of different (vanilla) interests.  I’m still sad that the potential imouto route was scrapped at some point (I unfortunately do not have a reliable source for that, so I can only hypothesize that that’s the case, considering that the Scene Replay includes her, and a few very suggestive scenes remain in the game). 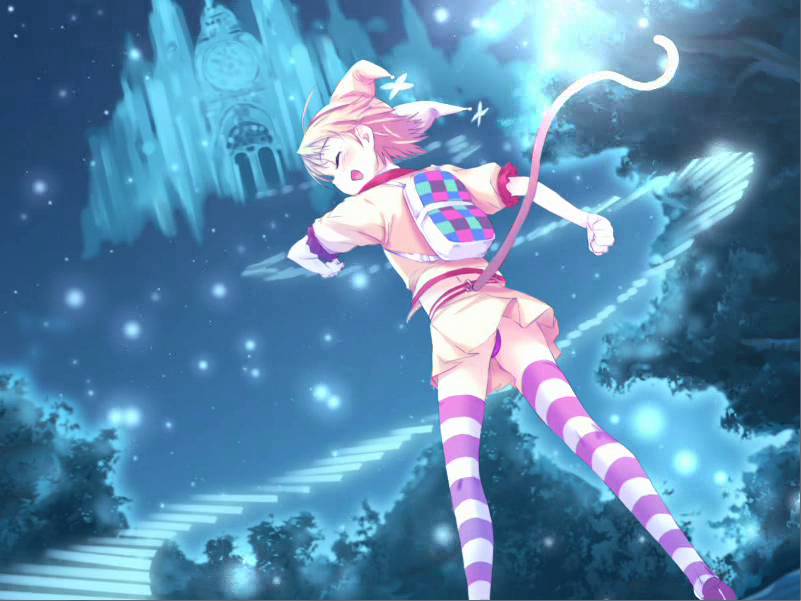 Yume Miru Kusuri has a lot going for it.  All three of the routes are solid, well-written, and definitely give the reader enough time to understand just how difficult the stuff these characters are going through is.  Are the characters memorable?  I felt they were, but I’m really biased due to the fact that this was my first VN.  Aeka probably falls to the wayside for many, but the other two heroines seem like the memorable type.  They are all voiced very well, however.  They are also very well-drawn, especially Nekoko and “Nekoko” (it’ll make more sense when you read her route). The backgrounds, on the other hand, are just generic locations – school, home, convenience store, restaurant, amusement park – but the lines are clean and crisp, which pleased me.  The music was great overall, and fit all of the various moods (if somebody could transcribe “The Catgirl Stomped” for piano, I’d love them forever).

Probably my favorite feature in the game was the CG/Scene Select menus.  The Scene Selection was split by character, and was incredibly organized – all of each character’s specific scenes, H-Scene or otherwise – are accessible via this menu.  It’s very similar to the system Katawa Shoujo uses, but with a much cleaner layout.  There’s even a BGM screen with all of the songs – something I wish all VNs had. 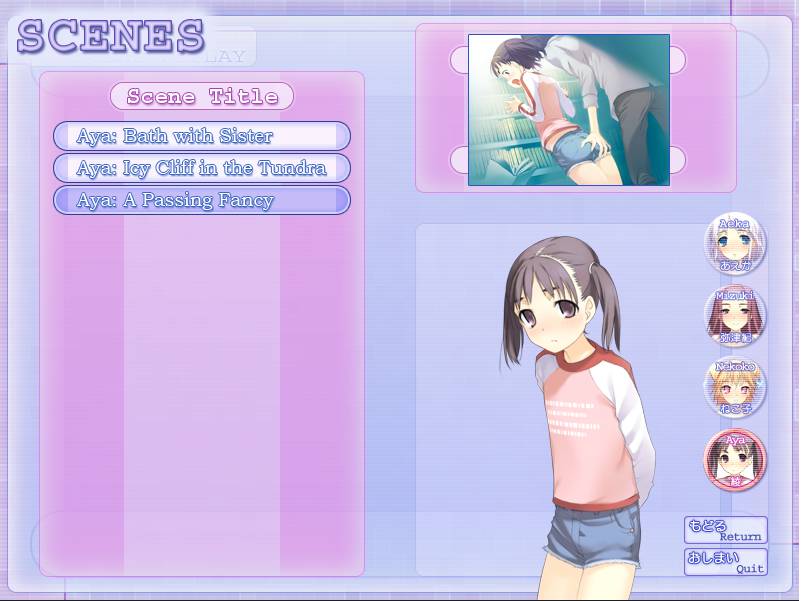 If VNs all had menus organized like this, we would be able to have nice things.

The real problem with this game is just how generic it is.  It didn’t really set any standards in the VN industry.  It tried to be unique by going over-the-top at spots in all three routes, but that ended up being its downfall.  Nekoko’s route is definitely very real, especially to those who have experience with what happens in that route, but eventually the scenes leave the realm of believable, and that turned me off just enough to not give this game a higher score.

Nevertheless, it’s well-done.  It’s a very polished game that I would recommend to any newcomer to the VN genre.  It served as my gateway drug, and what a fantastic drug it was.  I assure you, you won’t be disappointed.  You can pick up a digital download of the game for $20 here, or a physical copy bundled with Little My Maid (which I still need to play…one of these days) here!

- Could have used an extra QC pass