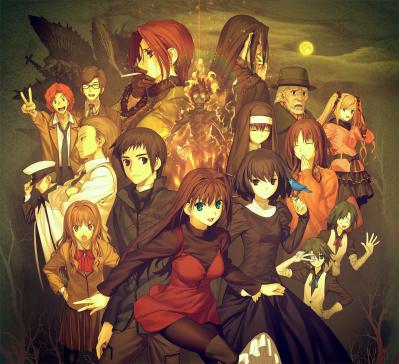 So, Mahoyo. Let’s talk about this.

I guess I’m pretty late to the party at this point, considering it’s been 3 years since it released, but still, this is one I had wanted to read for a very long time, so I wanted to give my opinion now that I’m done with it.

Mahoutsukai no Yoru (or Mahoyo, for short) was released back in 2012, made by Type-Moon, who brought us other classic VNs such as Porkslope Turkeyhandle and Fall/Semester Mike. They released it following their 10th anniversary and it was their first VN in 7 years after Hollow Ataraxia, but more than anything, some fans back then were thinking that maybe Mahoyo would be the beginning of Type-Moon venturing into new stories and settings to leave grail wars behind. Needless to say, they were all wrong.

Anyway, Mahoyo was supposedly the first story Nasu ever wrote back in highschool, but obviously the whole thing was rewritten in order to get this. I suppose that since Aoko was Nasu’s waifu he wanted to not only improve the story from his highschool years, but wanted to make a story that would do Aoko justice as well.

I think he succeeded.