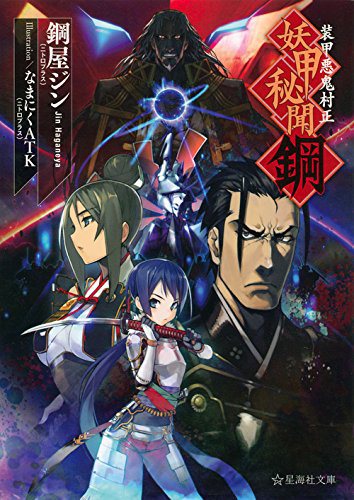 So as you may or may not have heard, there was a Muramasa spinoff-novel (I mean an actual novel, not a VN) written by Haganeya Jin and released all the way back in 2011 called Youkou Hibun Hagane. Well, four years later, they actually did a re-release of it, with the main difference being that the illustrations (by Namaniku ATK) are now in full-color. The novel’s story takes place during the infamous Nanbokuchou period (hundreds of years before the visual novel’s events) which was actually lightly touched upon in the VN, too: a lengthy and tremendously violent conflict that earned the Muramasa clan its infamy as a bloodline of Tsurugi that brought about calamity, bloodshed and insanity to the lands of Yamato. So now we get to read about how that actually happened! Fun times! (spoilers: lots of people die)

So, opening up the book, we come face to face with our lovely cast, segmented into the northern and southern forces. Here’s a pic that only includes some of them:

From left to right, we have Sagiri, Kusunoki (I think that’s how you read 楠木, anyway; he’s sort of our main “hero”, despite looking…