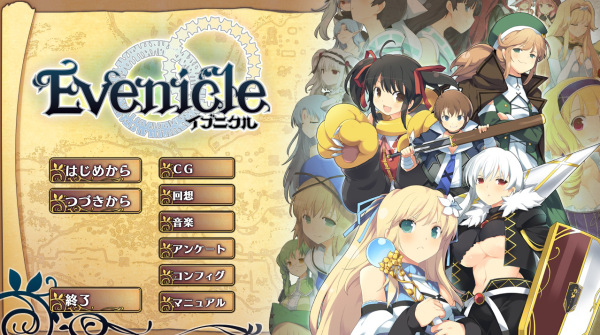 I don’t really have an eroge planned f until Primal Hearts 2 in August, so I thought I would write up something for Evenicle. Now this is actually the first time I’ve ever written about a game that has actual game-play, so don’t go expecting too much from me =3

Company: ALICESOFT
Game site: イブニクル
Release date: April 24, 2015
Links: VNDB
The creator of the world, the Holy Mother Eve, gave two commandments: one must not kill another human, and one must only have one partner for life. However, knights are exempted from the latter divine rule, so that they can produce powerful offspring to fight against monsters. Somewhere in the land, there was a young man Asterisk who wished to marry the beautiful twin sisters who raised him. He decided that he will become a knight and get lots of wives! Thus, he set out on his journey with great enthusiasm and ambition.

Micchi’s description of the game sums up things in a nutshell. Evenicle is a classic odyssey type story, where Aster and his party roam around the land to try to stop an evil organisation called “Jamon”. The game makes reference to King Arthur,…