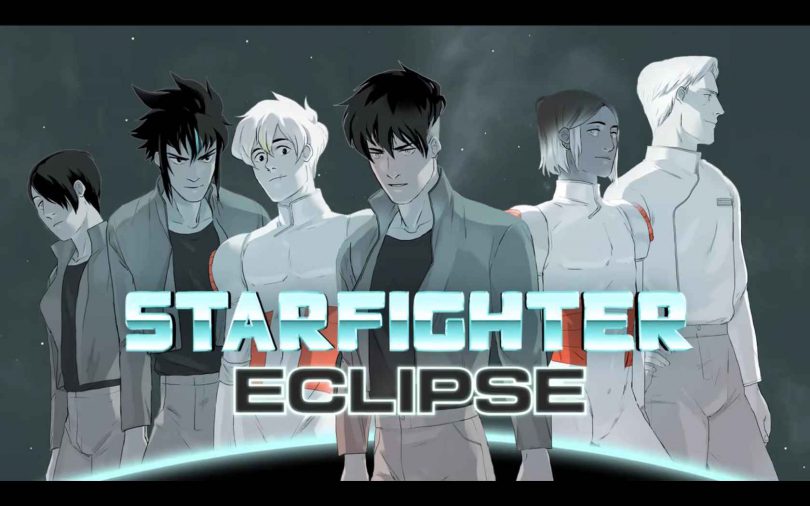 This review contains material that is NSFW. 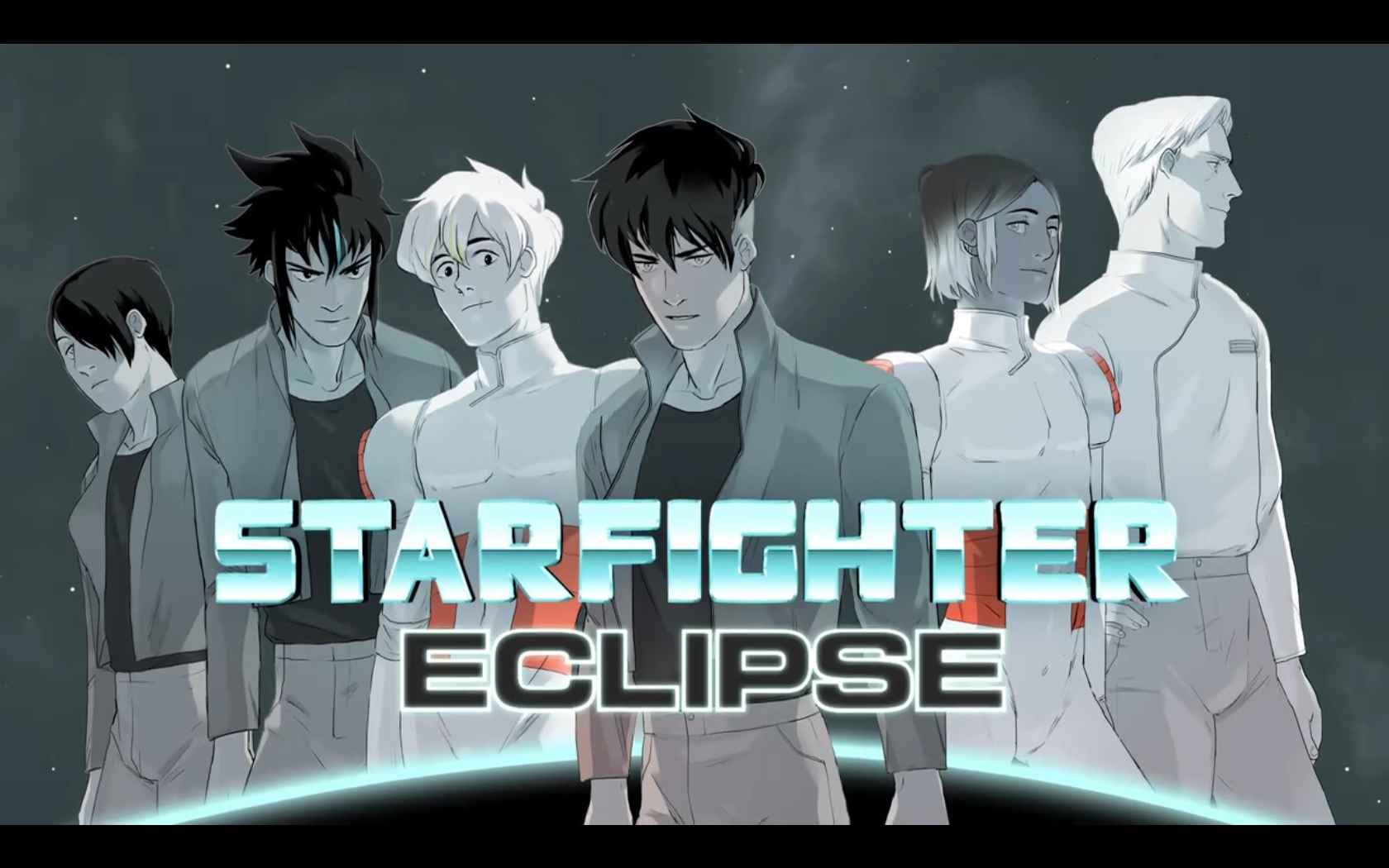 Based off the continuing webcomic series written by the wildly talented Hamletmachine, Starfighter Eclipse tells a sort of side story, utilizing two original characters unknown to the webcomic as the protagonists.  This game is actually the first release by Date Nighto, an account-based site where you play VNs in your browser, as well as on your phone, tablet, or anything else that has an internet connection.  While these other options appear to be available for this title, I will only be reviewing the browser version, which I was given a review key for.

It’s a decent read, but there’s a lot of backend work that needs done, and no, I don’t mean the sexy kind.  Though this game does have plenty of that… 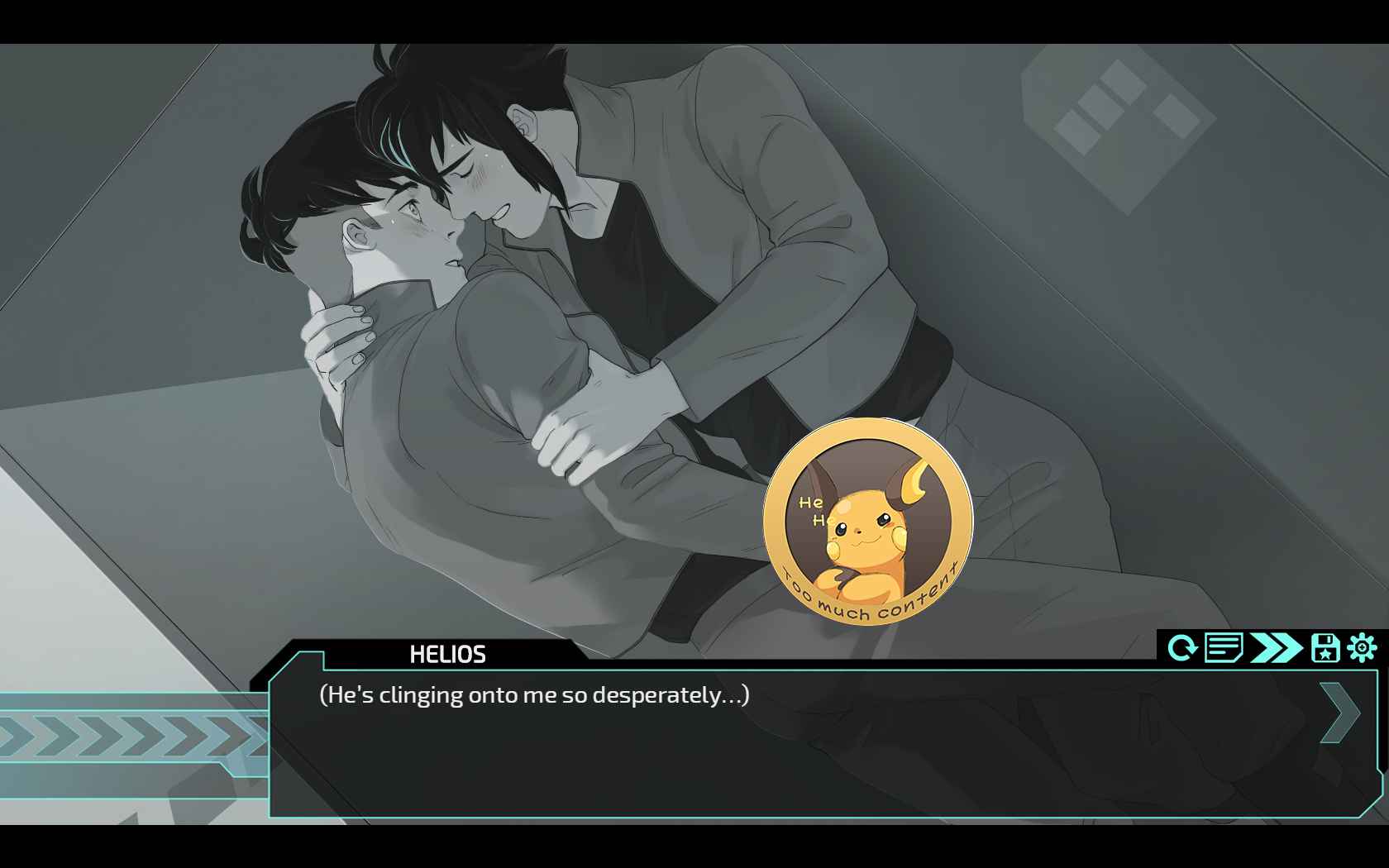 He’s doing a lot more than that, big boy.

For those who are unfamiliar, Starfighter is a yaoi series in Space that explores the relationship between Cain – a “shoot first” sort of guy who serves as a pilot for the Earth space military – and Abel, his “Navigator” – in other words, the brains that make sure they both don’t die in the midst of combat.  At the time of writing, it appears the story is still in Chapter 4, which is just starting to explore some of the problems that seem to be common knowledge in the game. Hamlet does say that you don’t have to know the story to enjoy the VN, but in my opinion, it will certainly help.

Starfighter Eclipse puts you in the shoes of Helios, a rather ambiguous character who is assigned to the same group as Cain and Abel (as well as virtually all of the cast and crew of the webcomic).  He quickly meets many of his crewmates, some of whom are welcoming to new members, while others are instantly out to knock him down a peg or ten.  During this time, he also meets his Navigator, Selene – a very smart prettyboy who is more interested in making sure you and he click than trying to make friends where they aren’t wanted.  Probably not the worst decision, honestly.

After meeting most of the crew, you are given your first mission – explore an unidentified ship.  While on this ship, a bunch of bad stuff happens, and while everybody makes it out more or less intact, things start to happen onboard the Sleipnir that are…also bad. 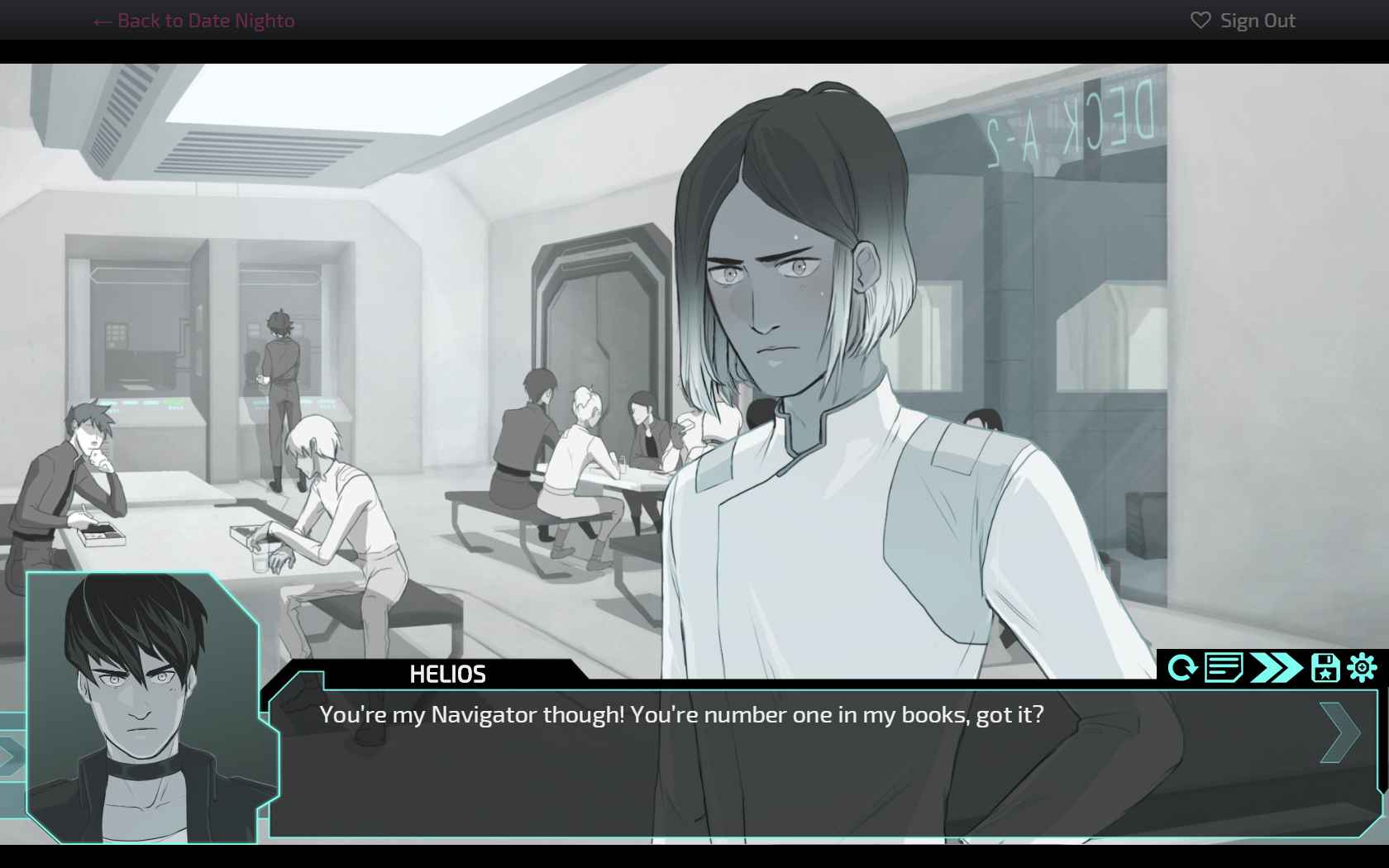 Yes, Helios is indeed wearing a collar and an incredibly low-cut shirt while more or less pronouncing his love.  The shirt reads “Boy Toy,” for the record.

Around this point the story splits into five potential routes (three main characters from the webcomic, Selene, and a new Commanding Officer that will not appear in the comic), each lasting around thirty or so minutes, which is a pretty big problem. The “prologue” up to this point runs about thirty minutes, meaning that you get around three hours of total gameplay.  And while there are a lot of options that will alter your path, you’ll quickly discover that all of the scenes end up going in the same direction for the ending.  At a lofty $20 price tag, I’d expect a lot more than this. Don’t get me wrong – it’s a great story.  The character development is well-written despite being very fast, but because of the length it almost feels like a single chapter from the webcomic, and those in print form cost less.

The second issue I had was with the game’s engine. It looks great, but it lacks a bit of polish.  Upon completing routes, for instance, you will see the text window reappear for a brief amount of time before cutting back to the main menu.  Skipping scenes also takes forever, because the game does not auto-skip scene transitions (the screen does change quite a bit with minor things – which is a great touch for a first playthrough, but afterwards is an annoyance), and also has loading screens.  I’ve NEVER seen a loading screen in a non-gameplay VN.

Another issue is that a lot of screens only have 4-10 words in them, particularly the H-scenes which describe every. single. action. and each. movement. gets. put. on. its. own. screen. I could literally click ten times and read as many words as I’d read after two or three clicks in a normal VN.

What I do like is the fact that you make an account on the website, and it saves all of your progress on the server side.  It keeps track of previously read text for you (though if you open it on a different device – I played the game for a bit on my laptop, and the rest on my desktop – it doesn’t seem to completely recall what all you’ve seen), has a gallery of all previously seen CG that is split by character, and also has save slots so that you can start and stop whenever.  It’s not revolutionary by any means, but it’s all server side – which is pretty neat. 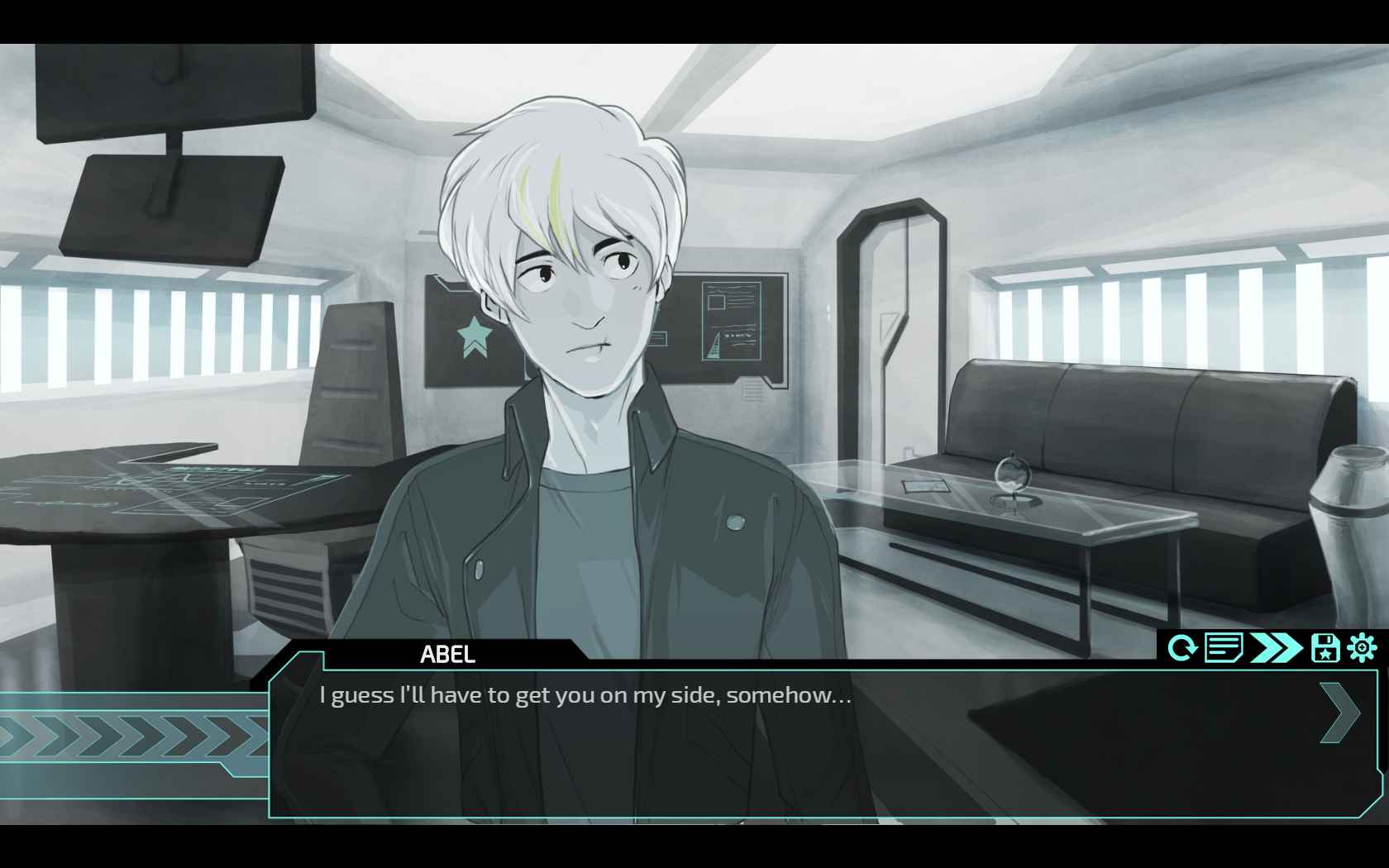 I’m not sure that means what you think that means…

Now the artwork in the game… It’s fantastic.  The game is mostly grayscale with a very minor amount of color used in highlights (a la the webcomic), but the lines are very well-drawn, and there is a LOT of attention to detail.  This includes the H-Scenes, which are completely uncensored and suffer no loss of quality.  The webcomic art carried very well over to the VN medium, and I’d love to see more of this.   The animation, on the other hand, was a little wonky, but any animation in VNs is appreciated, even if it is in the OP.  The music soundtrack for the game is also solid – mostly synth, but good.

As a chapter in the overarching story, it’s a solid piece.  I just really wish there was more. A lot more.  If you like yaoi at all, you’re probably going to enjoy this at the fundamental level, but honestly I can’t justify dropping a Jackson on this when there are much stronger titles out there.

But the online VN system though, I’ll be interested to see how much work they’re willing to put into this to clean it up – it could be interesting to see games ported to a system like this.  I know such methods exist, but this one’s pretty simple to control, yet stylish at the same time, and bears watching.  They have another game in the pipeline – maybe I’ll look into reading it.

- Number of Clicks : Total Words ratio is rather low

- Game is very short for such a high price point