Always Remember Me is a short and saccharine otome dating sim from Western developer Winter Wolves which is unfortunately lacking in substance.

The premise of the story is that the main character is in a motorcycle accident with her boyfriend, Aaron, who ends up in hospital with amnesia. Over the next few months she can either try to help him recover his memories, or move on with her life and a new relationship.

I don’t mind cliches so long as they’re well executed. This one, unfortunately, is not. You have encounters with the guys but none of them are particularly engaging and each character is pretty much what you’d expect, their personalities being defined from the first time you meet. The writing isn’t engaging and nothing particularly interesting happens. However I will admit that I’m more into engrossing stories and characters with depth than I am pure romance, so if you like sweet and sugary stories about lurve then you might get more out of this than I did.

Don’t give up the day job, Amy.

I found the endings abrupt and strange. While I get that they are intended as a kind of epilogue some of them seem so far removed from where the main character seemed to be heading, for example in the Eddy ending Amy becomes a nurse and works at the same hospital as her husband. At no point in the prior game has she ever expressed an interest in nursing, so it seems pointless to throw this out at the end. Others make far more sense, such as her becoming a romance novelist.

Since this is a dating sim rather than a visual novel I should also mention a bit about the gameplay mechanics. Well, you’re in for a lot of clicking with this one. It’s a very simple formula for each ending – simply maximize the correct skill point and affection for your chosen guy. Events occur on certain dates at certain places and give you the chance to increase affection based on your choices. It’s simple, but also very boring and repetitive once you know what you’re doing.

First let’s talk about the main character, Amy. She’s a sweet and honest girl, but damn she’s read one too many romance novels. Her poetry is absolutely vomit-inducing and I found her sappiness incredibly off-putting.

There’s one other female character who should be mentioned, and that’s Amy’s ‘rival’ for Aaron’s affections; his ex, Abigail. At first I really hated the way Abigail’s character was treated as a vapid, bitchy ex, but she was redeemed in Aaron’s ending, which I thought was a nice touch.

Moving onto the men, to be honest I didn’t connect with any of the love interests. There simply isn’t enough interaction with them, and what there is feels shallow. Then again, I may have missed some scenes with each of them as it is hard to tell where and when you can trigger these events. 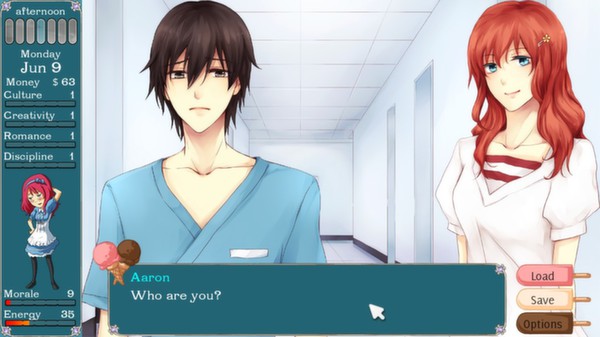 Kind of how I felt about all the characters, even at the end.

I found Lawrence’s shyness annoying, but he was definitely the nicest of the bunch. Eddy seemed way too mature for Amy. Hugh didn’t seem particularly well integrated into the game, almost like he’d been added in as an after thought. Aaron is clearly the route that had the most effort put into it, and honestly he does seem perfect for Amy since he shares the same hopelessly romantic outlook on life.

The artwork is the game’s strength. The character designs are lovely and I really like the watercolour style of shading. You collect CGs from both the normal and special endings, however I think it would have improved the overall experience if you also got CGs when events were triggered during the game.

I like that this game has its own theme song with vocals. There are some sound effects within the game, for example when you complete an activity you’ll hear either a positive or a negative phrase from Amy indicating how it went. I enjoyed these, but I could see how some people might find them annoying.