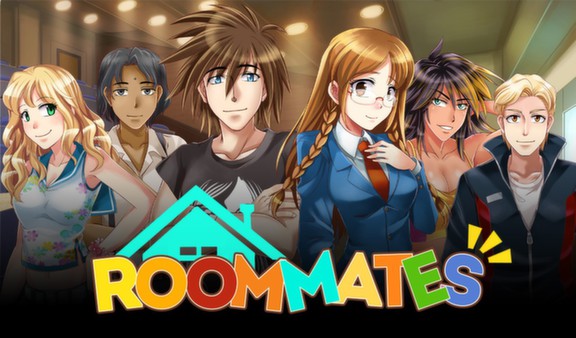 You are a first-year college student, and you live in a Co-Ed dorm with an RA who claims to be strict, but ends up letting a lot of stuff slide.  You live with a bunch of handsome boys and smokin’ hot girls, each more quirky than the last, and all of them would love to have an extra friend or two.  Sounds like fun, right?  Right?  You’d better have said yes, because Winter Wolves created a semi-realistic visual novel that reflects not only the ups and downs of living on-campus, but the parties, the romance, and the drama that comes with it.

Will you survive in this dog-eat-dog world?  Better yet, instead of just surviving, can you end up with somebody by not only proving you can keep a good schedule, but keeping your grades up as well?  This game is going to help you find out.  And overall, it’s a fun ride.

Before I begin, I purchased the Steam version of this game.  Since the game was originally an All-Ages release, the transition to Steam appears to have been very smooth.  Additionally, the Steam release contains both Max and Anne’s routes, so you ultimately end up getting two games for the price of one.

At the very start of the game, you get to choose which of the two protagonists you wish to play as.  Max is a punk rocker who is attending college and working to save up enough money to support himself and get his band going.  He’s one of those silver-tongued types who will always stick it to the man (or in this case, the RA that he has “lovingly” dubbed “Douchenic”) and flirt with the ladies, or in some cases the guys.  Anne, on the other hand, is his polar opposite.  She is a very reserved girl who seldom left her hometown, and is attending college to not only get a degree, but to try to break out of her shell.  She’s very studious, quite the bookworm, but when you get her to open up, she’s a lot more fun than she makes herself out to be.

After choosing who you’ll play as, you start your college life.  You quickly get acclimated to just how busy life is here, and learn that in order to make the most of your time, you should work on campus and partake in the many events that occur on a daily basis.

Now, who are the characters we can pursue?  We’ve got quite the cast.  And you can pursue either gender as either protagonist – so nothing is taken off the table!

Each character is very unique, and their scenes range from expected to “completely out of left field,” especially when it comes to Rakesh.

Roommates has a gameplay element that requires the player to meet specific goals, as well as properly romance the intended guy/girl by participating in enough scenes to raise their relationship score to 100.  Without the use of a walkthrough, this quickly becomes guesswork, with mistakes resulting in unsalvageable situations that will oftentimes prevent you from getting a perfect ending.  In fact, even on Easy difficulty, the game is so unforgiving that if you don’t prioritize from the get-go, you may not have enough points to get their endings at all (Hint:  You need a total of 500 points between two specific categories for each character, and a specific one must be higher than the other).  My first playthrough ended up going so far south that I ended up having to restart.  There are friendship endings, but those do not offer Steam trophies (there are 16 in total), nor do they leave any sort of a good taste in your mouth.

For anybody who has played Magical Diary, this system is very similar.

Aside from the gameplay element, there are also events that happen on specific days.  In order to romance your selected guy/girl, you must partake in their scenes and be amiable around them.  Piss them off, and the situation will quickly deteriorate.  Finally, both Max and Anne have a specific goal that provides an extra bonus towards the end of the game.  In order to obtain the perfect ends, you must have a full relationship score with somebody, at least 600 combined points allocated to that person’s two specific categories, and meet these goals (which requires a handful of extra scenes to be played), adding to the difficultly at a pivotal stage in the game.

Here’s the kicker – the scenes between both protagonists are similar in a lot of aspects, and if you commonly skip previously read text like I do, you’ll start to notice that you’re holding it a lot more – especially if you play all of one protagonist’s routes before even touching the other.  Granted, that does help you imagine the game from the other protagonist’s perspective (both characters attend larger events, and they also have the option of romancing each other), but sometimes it feels bland.

There are a few other issues I had with the game, though they are relatively minor at the end of the day.  For one thing, the number of background images is pretty limited.  Now, this is mostly acceptable, but when the bedrooms at Anne’s house and at the Spring Break vacation house are identical…they either had architects that thought VERY MUCH alike, or they took the easy way out.  That, and the editing job was shoddy at best. There are a good number of grammatical errors, and since my mind notices those almost instantly, it made some sections very difficult to deal with.

The game does include an original soundtrack that consists of a couple vocal songs, acoustic, non-vocal, and minor key transpositions of those vocal tracks, and some sound effects.  There isn’t a lot to work with, but at the very least they were used well.  I did notice a bug where, if you scroll back to a window that had no music behind it and scroll forward to one that did, the music will not start back up.  While not game-breaking, I would notice large stretches of time without music, and realize what had happened.  Nothing a quick reload couldn’t fix though.

The characters and their facial expressions are acceptable, though not stellar.  Side characters (Memphis in particular – he’s a character you’ll meet on either protagonist’s route) sometimes only have a single sprite, and may be involved in large portions of the game – so get used to seeing the same sprite over and over.

But overall, the story of a first year at college is pretty fun.  There are lots of laughs to be had, and the romance gets very close to getting that 18+ rating, but falls just short with a properly timed timeskip.  It leaves VERY little to the imagination though, as the CGs right before the timeskips show what may or may not be happening in the thirty minute windows they avoid.

You can pick up either protagonist’s story, or the combined version at a discount, from Winter Wolves’s website.  I enjoyed both protagonists and their routes, but if for whatever reason you only want one or the other, I did enjoy Max’s route a bit more – only because I love music.

Good job Winter Wolves, I can’t wait to read more of your stuff!