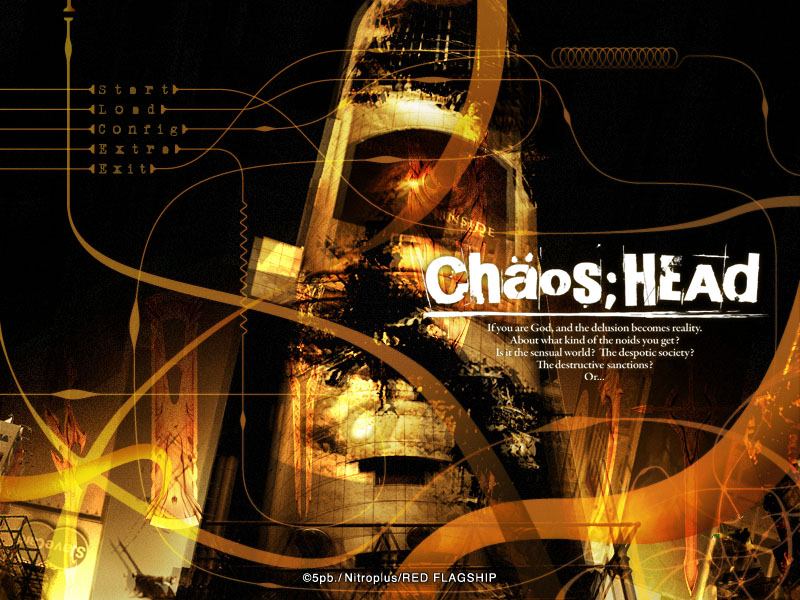 Chaos;Head is the first VN of the Kagaku Adventure series, product of the collaboration between Nitro+ and 5pb. The visual novels of this series, written by Naotaka Hayashi, are science-fiction stories set around our present time.

A little foreword on the sciencey part of this series. It might seem obvious to some of you, but most of the scientific concepts used to explain the plot of those games is close to Doctor Who-tier of timey-wimey technobabble. And that’s not a bad thing! What I’m saying is that if you had the idea of reading those stories as hard science-fiction or social science-fiction story, it’s a mistake. The idea here is just to set a science-like mood.

And make no mistake: after reading through Chaos;Head and especially Steins;Gate, and experiencing Robotics;Note through its anime adaptation, I’m fairly convinced that Naotaka is himself a science nerd that totally knows his shit. A lot of other background concepts (such as the various time travel theories presented by Kurisu in Steins;Gate) are completely legitimate. But quite simply, the reason why this “Science Adventure series” takes the appearance of science is: because it’s cool.

Chaos;Head is the story of Takumi, an otaku high-school student who only goes to class just to meet the minimum attendance requirements and spends the rest of his time in his 2D world of MMORPGs and anime.

Mysterious, gory murder cases start to happen in Shibuya where he lives, and Takumi seems to get gradually roped into this as he receives images in a text chat predicting the next murder. 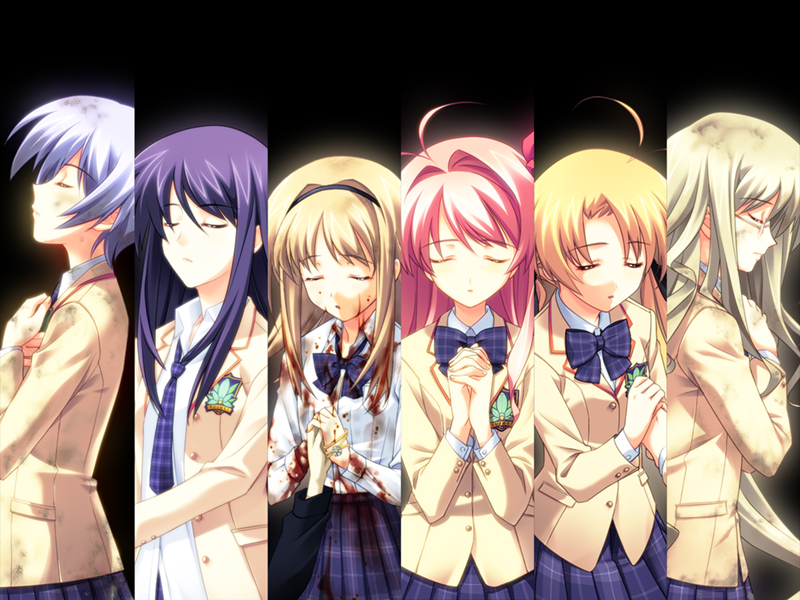 Chaos;Head is what you would call a denpa story. The definition of the denpa genre is a bit blurry, but most of its hallmarks are present here. Electromagnetic waves shenanigans, hallucinations, paranoia, crazy behavior… This genre takes us back to a time when computers, the internet, and technology in general were a bit more mystified than they are nowadays, and its conspiratorial aspect is typical of the 90s.

I had seen the Chaos;Head anime prior to reading the visual novel – which is, sadly, pretty bad. Aside from looking terrible, its second half was an absolute mess, much more so than the second half of the visual novel. I was thus pleasantly surprised when I played the game and found it to be good.

The first part of the story is, in my opinion, the best part, a part which not even the anime managed to make bad. It is a sort of build-up of the plot, where Takumi gets roped against his will into this sordid murder case, where he drowns into his delusions to block out the real world. The part where all the mystery elements are set, where no question have been answered yet.

At this point the focus is almost exclusively on Takumi. Plot points are set but left in the dark, characters are introduced but not yet characterized, but all those new elements are introduced as part of Takumi’s own world of horror and delusion.

And Takumi is really perfect, from his thoughts to his voice, in his role of a pathetic, delusional otaku and his depiction is one of the strong points of the game. Indeed, Chaos;Head couldn’t possibly have worked with a stronger protagonist: it simply isn’t the kind of horror story suited for a rational, cold-blooded character. A sensation of a horrific atmosphere impregnated with craziness is created.

A shift then progressively occurs. You could call this part the confrontation between Takumi’s jumbled mess of a mind, and the ‘real’ world. We get to see the world through the points of view of other characters and obtain concrete answers, which gradually demystify the insanity and dispel the atmosphere of fear for something more tangible.

But this part is still very interesting for two reasons. The first, the plain and obvious one, is the progression of the plot and the characters keeping the reader interested. The rhythm accelerates to pull us into the story.

The second is that it’s the part where the game’s “themes” are the most on display. I’m not going to say that Chaos;Head has a well constructed and deeply thought-out message on the concept of reality, its subjectivity and its illusions, but there definitely is some amount of questioning. And it doesn’t make the mistake of being abstract and metaphysical about it, which would give off an air of edginess. It is, instead, intertwined with questions about how one is perceived by society, how entities such as a mass media affect our perceptions, etc.

Again, there’s nothing groundbreaking here, but there is an interesting duality between Takumi’s struggle to establish the boundaries between the real world and his imagination, and the more global gap of perception between the ‘absolute truth’ and the subjective ‘perceived truth’ of each individual.

One of the main issues I have with Chaos;Head is its conclusion. Honestly, it comes as no surprise that the conclusion would be disappointing, and I don’t know myself how it could have been better. Considering how much the game was based on its horrific atmosphere and the reality/delusion duality, when the plot points are solved and we get concrete answers to our questions, those answers can’t be anything short of subpar.

One thing I’ll give is that the climax is not the overly stretched kind we can often see. The pace of the game is rarely disappointing, and the end is no exception: there was no reason to dwell for a long time on the resolution. That’s the typical kind of error that was made in the anime, which focused on plot twists nobody gave a damn about.

Still, more ambiguity would have been appreciated.

A weak ending isn’t enough to pull down this visual novel, though. The main thing I see that could bother people is Takumi: while I find his personality perfectly fitting for the story, the internet is full of weird opinions regarding protagonists, especially “weak” ones.

But all in all Chaos;Head is clearly worth a try.

A weak ending isn’t enough to pull down this visual novel, though. The main thing I see that could bother people is Takumi: while I find his personality perfectly fitting for the story, the internet is full of weird opinions regarding protagonists, especially “weak” ones.
But all in all Chaos;Head is clearly worth a try.