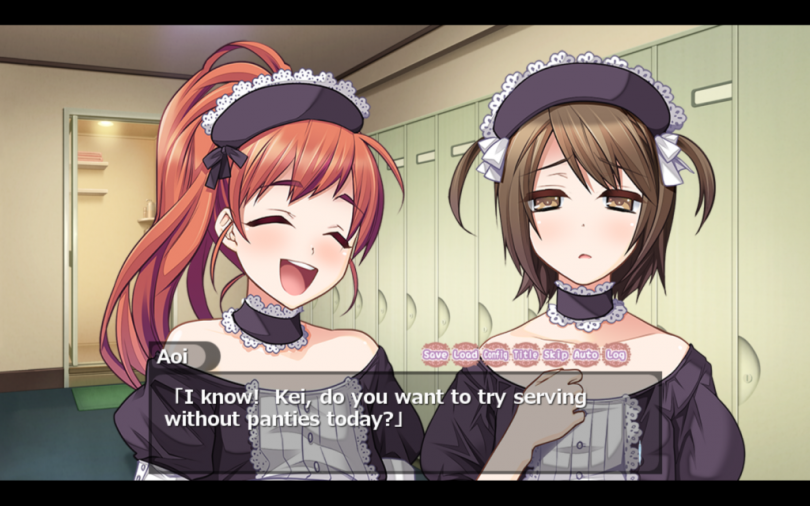 Welcome to Ryechu’s Nukige Corner, where I introduce you to Nukige titles you may not have heard of before. For those who aren’t in the know, the term “nukige” refers to games that focus solely on sexual content. The plots of these games serve only to set the scene for the H-Scenes. If these types of games are of interest to you, read on!

First and foremost, a crash course on traps and shotas:

Traps: Are men who dress up like women and are typically very feminine in appearance. Typically you can’t guess until you lift up their skirts.

Shota, which comes from Shotacon: Are young boys. Shotacon are people who love young boys.

For those who already knew, and now those in the know, let’s take a look at a game that features ONLY those two things.

Released late in 2013 and translated into English by Lv1 Translations less than a year later, おとメイド＠cafe ([email protected]) is a short and sweet nukige by Otoko no Ko Club. It begins with young Kei, who accepts a part-time job at his older brother’s – Iori’s – cafe after moving to a larger city to attend a prestigious school. What he didn’t realize was that the cafe was manned completely by crossdressing boys. Even his brother is a crossdresser, and they all wear very frilly maid outfits. If it weren’t for a certain something between their legs, anybody would assume that none of the waiters there were, in fact, waiters.

Nevertheless, Kei decides to go along with this, and quickly meets his coworkers: A tsundere named Tsukasa, who at first glance vaguely looked like a light blue-haired Hatsune Miku with a polar opposite attitude, and Aoi, a singer who aspires to become an Idol, and performs concerts while on the job. These two help him quickly get acclimated to working, and Aoi even helps Kei out with his growing needs.

The routes split rather quickly, and you pursue one of these two boys. Should you go down the tsundere path, Kei quickly starts to take control of the situation. You learn that Tsukasa is actually in love with Kei’s older brother, but since they look more or less alike, he decides to stay with Kei instead. Sex ensues. Lots.

Aoi’s route, on the other hand, takes a different turn. Aoi decides that he is going to be the one to take the lead, and more or less dominates Kei, who remains ever loyal as a talent scout “discovers” Aoi and says that he could potentially become a very popular idol. Sex still ensues. Lots.

And there’s the harem route. And here’s where I get annoyed. I read what I thought was the first harem route (when you make a variant selection on Aoi’s route), and it indeed involves a third person. But when I was reading the second harem route (a variant on Tsukasa’s), you get the Same. Exact. Scenes. Don’t get me wrong, it was a good scene, but talk about a buzzkill…

Though my biggest issue with the game was the artwork. Some of the scenes were impossible to picture, especially the scene with Kei and Aoi when they’re filming. If you ever play this game, take a close look, it literally looks like a flying penis. While it made me laugh for no less than ten minutes, it later bugged me that the artists couldn’t take the time to go and check that kind of stuff. And the facial expressions throughout. They were awful. The artists tried for decent ahegao, and they got…freaky-looking ahegao. They look incredibly fake.

But then again, it’s a nukige. And as far as nukige go, this one’s enjoyable. I happen to love shota and traps, so of course when I located this one I picked it up. It comes in at just a little over two hours, and there’s enough fap material here to keep you going for a while. This game is pretty rough to track down a copy of, so you’ll have to abuse a friend in Japan (that’s what I did!), but you can get the English patch on Lv1’s site. Be sure to send them your support!

Now if you’ll excuse me, I’ve got an OELVN to read.

- Only one harem route.

- Translations may have been TOO faithful.