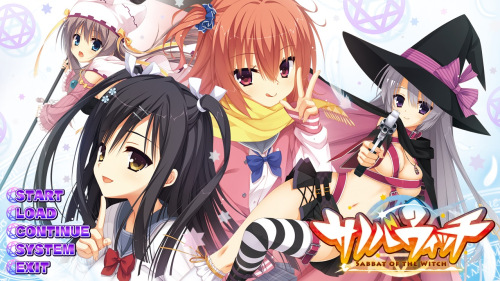 I’ve finally set up my VNDB account. It’s pretty much the same as the list here on the blog, but it has ratings. Note that I didn’t put much thought into those ratings, so the accuracy is questionable.

It’s been quite some time since I’ve written a review, so I can’t vouch for the quality. So if you have anything bad to say, THINK IT, but then write the opposite. If you do that, I won’t have any idea which of the good comments are genuine, and I’ll be left paranoid.

Nene’s secret activities as a witch also pull in kouhai Meguru, senpai Touko and transfer student Tsumugi. The peaceful days become quite hurried and Shuuji has a slight feeling that something is about to begin.

It has become the norm that Yuzusoft makes OPs that are mostly animated. This OP wasn’t bad, but as far as OPs go, I still prefer the one they made for Dracu-Riot.

Hoshina Shuuji was born with the ability to sense what people are feeling through his five senses. To avoid people directing unpleasant feelings at him, he keeps people at a distance. Akaji Nene is a witch who for the purpose of fulfilling her dearest wish has been collecting “heart fragments” from those who show excessively strong emotions. Unfortunately, all the fragments that Nene has collected get sucked into Shuuji due to the hole in his heart that formed from him worrying about his ability. With the resolve to return these fragments to Nene, Shuuji joins the Occult club in hopes to change himself.

Various people come to the occult club for consultations about their worries, and slowly we’re introduced to all the heroines. The common route focuses more on Shuuji’s gradual growth rather than on magic or the collection of heart fragments. The pace is fairly quick, so things don’t feel too dragged out. However I feel that Shuuji’s growth is a bit drastic given the depth of his trauma. There’s some comedy, mainly sexual innuendo, but the main focus is on slice of life.

A person who has a deep desire can fulfil their wish by forming a contract with an “Alp”, and hereby becomes a witch. Alps are animals with an interest in becoming human, and slowly understand human emotions as they receive heart fragments. A Witch’s wish will be granted once they fill up their bottle with Heart Fragments, which as I stated above, are collected from those who show excessively strong emotions. A heart is very fragile, and excessively strong emotions will lead to it becoming unbalanced. In this sense, an Alps’ demand for heart fragments is a win situation for all parties involved.

So magic is involved in all the routes, but there are very large variations on how much of an impact it has. I would say that it was significant in Nene’s and Touko’s routes, but just a side dish in the other two routes. I found it a bit unfortunate that the only Witches that show up in the game are Nene and Tsumugi; I was sorta hoping for a showdown of sorts. In the same way, we don’t really ever see someone who’s heart gets very unbalanced. I mean, I thought we would see some crazies, but it resulted in nothing.

Modest, considerate, and somewhat naïve, Nene is very popular. However, she keeps people at a distance because her contract causes random outbursts of sexual arousal. She is originally the only member of the Occult Club, and uses the club to collect heart fragments by consoling peoples’ worries.

Magic has the biggest impact in Nene’s route, causes a lot of emotional turmoil between Shuuji and Nene. The drama was good, and the resolutions the two reach is something I liked. The struggles that Nene face really pull at your heartstrings. Sadly, the bitterness and loneliness of this route is resolved too quickly. The route’s direction was very solid, but the route would have really hit you in the pit of your stomach had it put more stress on the sad reality Nene and Shuuji faced.

The funny thing about this picture is that I placed it in a place where it seems related to emotional turmoil. In reality, she’s having an orgasm in the hallway.

Nene’s self-loathing side is probably the funniest thing this game has to offer. Her pouting is super cute, but it’s something that is much underutilised. Given that Nene’s the main heroine of this game AND she randomly gets horny, it’s no surprise that she has the most H-scenes. I had slight hopes for slightly more extreme H-scenes given this property of hers. Add this on top of the fact that Witches are almost invisible when they’re in Witch mode, and you start to give me lots of wild ideas. Though strictly speaking, it’s not in Yuzusoft’s style to do what I was fantasizing about.

Because of her contract, wearing female clothing causes her to get nauseas. However she actually really loves girly stuff, and is very kind hearted. Unlike most witches, she received her wish in advance.

We learn early on exactly what Tsumugi’s wished for, and the truth be told, it’s hilariously trivial. Unfortunately, Tsumugi’s route largely focuses on the Alp she enter into a contract with, Akagi, who is the cause of many mishaps in this route. Akagi did many things that annoyed me and the fact that the route focused on her ruined the route for me.

I find Tsumugi very attractive as a heroine. Her soothing gentle nature, her bashfulness, and girly side are made quite clear. However, the nature of route makes it so that there is very little opportunity for romantic development. There’s the whole wearing guys’ clothing, but trust me when I say that’s not the only thing. So the fact the route didn’t focus more on her was a huge disappointment.

Touko is the current student council president who many look up to. She loves teasing people, and often discreetly makes dirty jokes. She holds a secret fascination towards the concept of love, and hopes to one day experience it.

Shuuji notices that he’s never been able to sense what Touko’s feeling, and investigates into this. We discover that Touko’s interest in love relates to Shuuji in a “magical” way.  The route’s direction is pretty obvious because they give not so subtle hints, but the whole thing is portrayed quite well. The drama that takes place is very reasonable, but the pace was a tad quick for my liking. Overall, I think things were linked quite well.

As far as older sister type characters go, I would say that Touko is quite up there. Touko has your calm older sister seductive charm, but without feeling overbearing. Her love for kisses is a cute charm point, and it’s unfortunate that she doesn’t show other cute points until the end of her route.

Meguru changes her image before entering Himematsu Academy in hopes to become popular. Unfortunate circumstances cause her to lose her chance to debut herself, and she turns to games in hopes that they’ll help her blend in. She is somewhat social awkward, but has a bright and cheerful personality around friends.

Meguru’s route is pretty much just a slice of life route from start to finish. The route has a good balance of uneasiness, jealousy, cuteness, and flirting. Top this off with Meguru’s character being cute as hell, and you got yourself a great SOL route.

Magic is involved with why Meguru tries to debut herself when entering high school, and this factor also adds in some fairly nice backstory with her. The route loses points for trying to add in some BS story element related to Shuuji’s ability. However as it should be clear from what I’ve said above that this route has very little focus on story.

Wakana is Shuuji’s classmate, and is one of the few people who talk to him on a regular basis. Honest and upfront, she talks with guys and girls in equal regard. She has a deep passion for playing the guitar, and she has been secretly practicing it for years.

With hopes to liven up the school’s Halloween party, Shuuji forms a band with Wakana, and starts practicing bass guitar like mad. Wakana helps out with Shuuji’s practice, and with the amount of time the two end up spending together, an “accident” was just waiting to happen.

I don’t generally approve of feelings sprouting from accidents, and this was one of those cases. As a side route, Wakana’s route is incredibly short, and a majority of it is the two practicing for their live performance. I admit that she has her cute moments, but overall her character and route didn’t have any pop.

No complaints about sound. What am I, a DJ?

Yuzusoft’s system is something I really like. You’ve got all the features you would ever want for a standard system game. System features include:

There’s also a load of settings that you can play around with to customize things to the way you like. I removed the chapter display, but was too lazy to do anything else. However, it’s nice to have options available.

As you’ve seen throughout this post, Sanoba Witch has very high quality CGs and SDCGs. For good measure, here are a bunch of SDCGs for you to enjoy.

Sanoba Witch doesn’t have the best story, but for the most part, it does a decent job portraying the story it has. The characters are cute, and I imagine that there’s someone there for almost everyone. The game’s fast pace makes it an easy read, and you don’t spend much time reading filler. Yuzusoft’s top class system is something I’m sure a lot of gamers out there will appreciate.

Of course, this game isn’t perfect. Though I said that fast pacing contributes to the game, it’s also a weakness in that we lose detail and some moments in the game feel too short. In particular, some critical moments in the game really needed a bit more emphasis to have that extra impact. The game had humour, and it was fairly decent, but there’s significantly less laughs than I imagined.

So weighing all things, is this game worth playing. For slice of life fans, yes. For story lovers, not so much.

Hanasaki Work Spring! and Anekouji Naoko to Gin’iro no Shinigami are on my radar for next month. Given how much I liked Majikoi and Tsujidou, you would think that Anegin would be on the top of my list. Yet somehow I pretty sure I’ll pick up Hanasaki first.