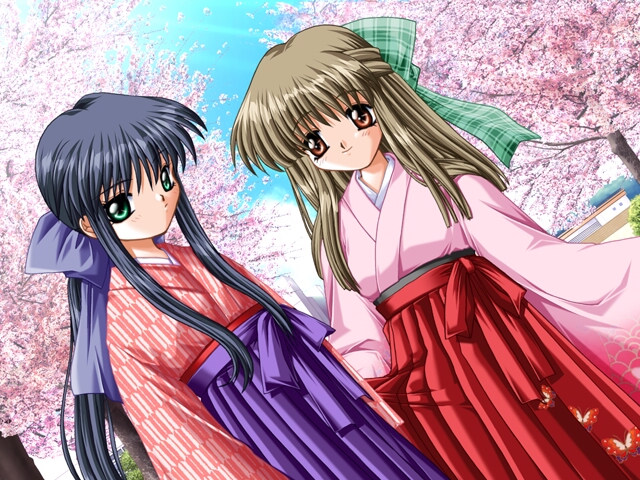 Who doesn’t love Key? Horrible people mostly. Key is one of the most popular visual novel developers and their success is very much deserved with hits such as Clannad, Air and Little Busters under their belt. But does 1999’s Kanon, Key’s first visual novel live up to its descendant’s standards?

Our story today takes place in a snowy town, our protagonist Yuuichi is returning to this holiday home of his after being away for seven years. Unfortunately for our hero he has no memories of this town, what’s even more tragic is that Yuuichi has lost any resilience to the cold he once had which leads to some rather hilarious moments (I know, I’m a horrible person). Yuuichi is taken in by his Aunt Akiko and her daughter Nayuki. The story follows Yuuich as he enters his new school and begins a new life. The story is your standard slice of life tale, one that veterans to visual novels will no doubt have heard before. There is an attempt to add some mystery elements to Kanon with Yuuichi’s memory loss and some questions do pop up in the readers mind every now and then but these questions and the mystery itself are kind of pushed to the side in favour of Yuuichi’s arc of adapting to his new life and are only brought up when the characters specifically mention them. Another flaw in the writing that some players may find is that certain elements can become repetitive such as Nayuki’s bad mornings and Makoko’s mischievous night-time antics. This doesn’t make Kanon’s story bad, the story is enjoyable it just doesn’t bring anything new to the table making it easily forgettable.

This being a Key visual novel there is an abundance of choices.  This can be somewhat intimidating to newbies so for them I’d recommend using the walk-through available on the Fuwanovel Forums (link at the end of the review).

Let’s take a look at the characters.

Of these routes I’d have to say Shiori’s is my favourite, with Mai’s route clipping at her heels.
One of the best things about Kanon is the characters; they are all varied and likeable. Each of them has their own quirks and interests’ so interacting with them is always a treat. I never really got bored with any of the characters even if some of their trademark gags did start becoming a little repetitive.

As for the side characters, there aren’t many. Excluding the characters that are restricted to a heroines route there are three side characters; Akiko, Yuuichi’s aunt and Kaori and Kitagawa who are Nayuki’s friends and classmates. Not only is there a lack of characters but there is also a shortage of locations, the bulk of Kanon takes place in just a handful of locations. This isn’t necessarily a bad thing; I actually found the more confined world helped put more focus of the protagonist and heroines. Just don’t go in expecting Hoshizora no Memoria’s huge world and character ensemble.

The problem I have with Kanon’s characters is that, like the story in itself, they aren’t particularly memorable. Nothing happens to them that really tugs at the heartstrings (which I will get into later) and nothing really leaves a lasting impression. The only character trait I can really remember without giving it any though would be Nayuki with her morning problem, and even then this may be because the gag is played out just about every in-game day.

Why everyone is going to hate me

Unfortunately I do have a few more gripes with Kanon. For starters the sex scenes; these are perhaps the worst sex scenes I’ve seen in a visual novel. The scenes are very short (thank god), there isn’t much description as to what’s actually happening so it’s clearly not fap material and yet there is no emotional weight behind it and there is practically no mention of it after the characters have sex so it’s not emotional either. Personally I think this should’ve been an all-ages visual novel, either that or they should’ve put more effort and character development into the sex. This may just be a matter of release times, I mean this did come out in 1999, maybe this was how things were done back then, but even if this is the case that just means that Kanon hasn’t aged all that well. My next problem, which is perhaps this visual novel’s greatest flaw, is that most of the routes are more or less the same. Three of the five routes centre on loss (and even then loss is part of a fourth route) which is fine as it can be quite intriguing and a real hitter of the feels but unfortunately this isn’t the case here because any intrigue is lost when you’re going through the same motions just from a different point of view. This was incredibly disappointing as the characters are varied but their routes just make you think “I know I should be tearing up but the elephant in the room won’t stop looking over my shoulder”. Another problem is the music; while the music is pretty good there are two or three tracks that will play over 80% of the story and they can get a little repetitive, though I didn’t really notice this until later so you may not have any problem with it. The final problem is the art style. This is where Kanon’s age really shows, the art is incredibly dated and in some places really dull. Kitagawa’s design is the best example of this; his design is just so dull and uninspired I can hardly remember what the guy looks like. While I’m rambling about the character design I might as well ask; does anyone else think the character’s lips are too far up from their chins? It may seem petty but this was really distracting for me especially when I first started playing Kanon.

I’ve spent a lot of time talking about things I didn’t like about Kanon and it’s probably given the impression that I don’t like this visual novel or that it isn’t very good. This is not the case; I really liked this Kanon and I think it has great value, it just has a few stand out problems that need addressing. Is it the best visual novel? Hell no, it’s not even the best Key visual novel, but don’t let that fool you, Kanon is worth your time. It’s a fun little visual novel that admittedly has a few flaws but these are mostly a result of its age. I personally would recommend this for when you want to read something but want it to be nice and simple, maybe after coming out of a bigger visual novel like Grisaia no Kajitsu.