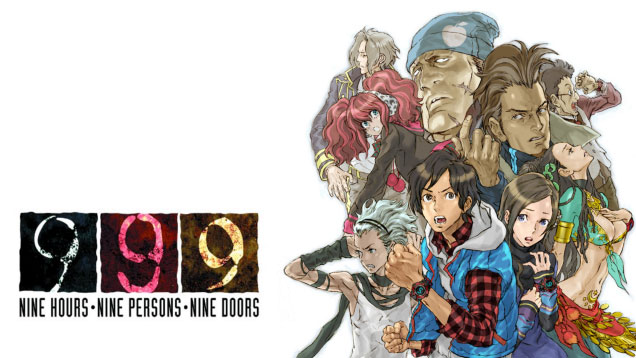 So, you’ve stumbled on this little interesting genre called “visual novels”(VN from now on). Or you’ve been playing them for years. It doesn’t really matter. Just keep in mind that this review will be written in a “VN for beginners to the genre” syntax.

I’ll be reviewing this VN by Story, Gameplay, Visuals/ Audio, Newcomer Friendliness and Interface- in that order. The individual categories will be given a score out of ten, but the overall verdict won’t have a score.

The most important thing in a VN is the story, what it hopes to achieve by the story, and how well it accomplishes that goal. The graphics, the music and the occasional gameplay exist to serve the story in a VN. Therefore, the main question I’m trying to address in this review is as such:

…It has a long answer.

999 is the localization of a small DS title which was not very successful in Japan. It was a risky move to localize it and bring it to the West. It paid off, and the game’s sales in the West spawned a sequel. But that’s a VN for another day.

Our tale begins with Junpei, our protagonist, getting suddenly kidnapped in his college dormitory by a masked assailant. He awakens in a small cabin room with a bracelet he can’t take off on his wrist, a bracelet marked with the number “5”. A short while later, he meets eight other people: A man with amnesia, a woman with clothing that defies quantum physics, someone very special to him, and others. Our heroes then learn that they are trapped in a ship, and have to solve puzzles and find a door marked with a “9” to escape. If they don’t escape in nine hours, a bomb rigged in the ship will explode and they’ll all die. The mastermind names itself Zero, and then commences the game in full speed.

The game sets incredible pacing, especially in your first time through. Running around in hallways, trying to solve a puzzle that doesn’t appear to have an answer, finally getting out of a room and setting out to explore what’s next is a priceless experience.

999, as with most VN’s, achieves said tension by offering you choices that affect what happens next in the story, often directly. The choices in the game are almost always harrowing, and you might find yourself thinking over a decision you made several hours earlier, which has influenced the situation you’re in. There are relatively few choices (and endings) in this game compared to most other VN’s, but each choice has significance.

Six different endings to reach, most if not all of them excellent in their own way, is more than enough incentive for one to play the game to its end. (Note: DO NOT make the mistake of stopping after getting a single ending: The full experience of 999 can only be achieved by getting all endings.) Learning about scientific and mathematical concepts along the way adds an ominousness to the atmosphere, as you have to struggle with concepts new to you in a strange, hostile environment. The parts of the story where you learn about these concepts (“infodumps”, as they are often called) are distributed well. They do not get overwhelming, therefore,  each concept has some importance. They are usually incorporated into both the puzzles and the storyline.

There is little, if anything, to be criticized in this game’s story. It’s the epitome of the beauty of visual novels.

999’s gameplay comes in the form of puzzles. They’re very reminiscent of the “Escape the room” puzzles made in Flash, but each puzzle has much, much more going for it than any Flash game. They have more thought put into them, and the settings of these puzzles are as ominous and grim as the story. Some puzzles left me for stumped for hours on end, but they actually are not very challenging except for a select few. They appear numerous times in the story, and can be solved again after you finish the game from the main menu. 999 holds its own ground quite well as a puzzle game, but there are some problems with story-puzzle integration, which I’ll touch upon soon.

In terms of connection with the story, all puzzles have a theme, significance, and are often accompanied by a feeling of urgency presented by the story. Unfortunately, the game doesn’t include a timer that counts down from nine hours, but that’s a pretty minor complaint. Who you solve puzzles with is influenced by the story, and the puzzles themselves can often be the catalyst for learning more about a character or the mystery surrounding everything. There is a single glaring problem, however: The game does not let you skip puzzles you once solved. Because of that, and as to get all endings you need to solve some puzzles multiple times, solving the puzzles more than once can get very dull and boring. They hurt the pacing of the game, and this is my only major complaint about the game.

The game’s visual prowess is limited by the hardware of the DS. There’s no voice acting, furthermore, character sprites, text and the gameplay sections all suffer to some degree, but 999 does make pretty good use of what graphical power it actually has. The backgrounds still look very nice, the sprites, while with few animations, never really grew dull and overall the game’s palette is diverse and powerful.

In terms of audio, the game packs a masterful soundtrack by Shinji Hosoe. What stands out isn’t the OST, but mostly particular tracks that one associates with a particular scene in the game. One particular song that plays in the late game might very well be my favorite musical track of all time. The game has cheerful tracks, haunting tracks, mysterious tracks, tragic tracks and pretty much for everything you’ll feel going through the game. There are 10/10 tracks, there are 9/10 tracks, some are not that good, but the scale never dips below 7/10 for any track, and the OST is great overall.

Unlike most VN’s, 999 features a lot of gameplay. Therefore, it’s easier to get accustomed to the heavy amounts of text and story. Moreover, the game is officially localized (not something many VN’s are blessed with) and the fact that it was originally a Japanese game does not stand out at all, the story is in no way alien to the Western-oriented gamer. The storytelling is simple and understandable for the most part, but the concepts and twists used in the VN can (and often will) be mind-boggling. You won’t try to work over the language, but the story itself, which isn’t a bad thing at all. Only the fact that it is on the DS might sound off-putting for some, but it is not. In fact, the game makes good use of that, but I shall say no more.

Overall, the game is one of the best entries into the world of visual novels. I can personally guarantee that, for I’ve done it this way.

The game’s main menu is simple, and it’s easy to navigate through. The same holds for puzzle rooms, the story sections and pretty much everything else. A flowchart and more than a single save slot would have been nice, but there’s nothing exceptional nor atrociously bad in here. Merely adequate.

999 is a masterpiece in the VN world. The story is complemented by excellent gameplay, and alongside pixelated backgrounds and beautiful music, it promises one of the best experiences you will ever have in any medium. A must-play; whether you are new to VN’s or not, whether you own a DS or not, whether you care about my opinion or not.

Rue the time you wasted on reading this review instead of playing the game.

- Only one harem route.

- Translations may have been TOO faithful.