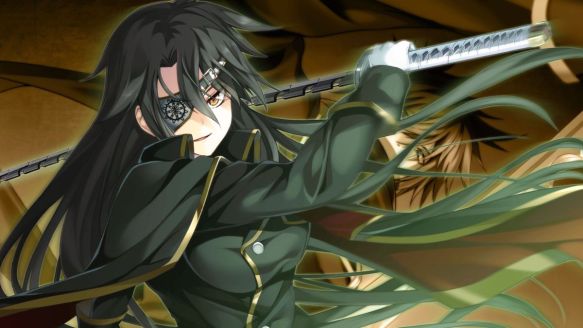 So back in December, I wrote about the first trial of Silverio Vendetta, one of light’s upcoming VNs (alongside Bansenjin) and ended that preview / impression piece by saying that I’d play the second trial, should they ever put one out. Well, I did just that, so now here are my random thoughts and impressions, very briefly. Quick warning, though: I’ll be talking about some of the stuff that happens in the trial itself, so if you don’t want to know, don’t read this until you’ve completed it yourself. There won’t be any earth-shattering spoilers or anything I suppose, but if you’d prefer to keep your reading experience totally fresh… well, you know.

As you may or may not remember, with the first trial my overall impressions were something along the lines of “interesting world, tons of infodumping, definite potential but not too much else so far”. So, now with the second trial, all the world-building is mostly out of the way, you know what Esperantos are and what Amaterasu and Astral is, so time to get some shit done. That more or less happens — we don’t get too many answers, mostly just foreshadowing, but it was enough to make me want to keep reading and reading just because I was curious to see what would happen next. So in that sense it’s an improvement over the first one. On the whole, the trial more or less focused on Vendetta and Chitose, I guess. 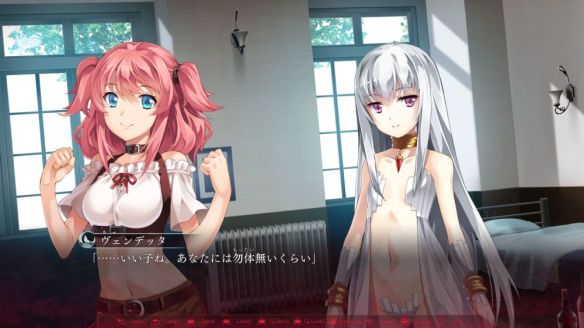 So, as you may remember from the end of Trial 1, Vendetta awakened and Zephyr pretty much took her and ran. The new trial starts the next morning, so yeah, Vendetta finally plays an actual role in this as an actual character, which is good. She’s sort of what you’d expect from her, always having a clever remark or two to piss off Zephyr, is a bit of a tease (see Lucio scene) but gets along just fine with Mille. Interestingly enough, Zephyr’s sheer and nigh-uncontrollable repulsion towards Vendetta was one of the key themes of the trial. Like, it gets to the point where he cannot even stand to be in the same room as her, as her very existence somehow seems to deeply offend him. This, in fact, is the major conflict in the trial, when Zephyr just cannot stand to be around Vendetta anymore and leaves in a rage.

This piqued my curiosity, so I wonder what the connection between the two might be, especially if you consider the vague / static-y CG (a flashback?) that was being thrown around a few times in the trial, of a young lady with dark hair who’s probably Vendetta herself. It’s very much possible they knew each other in the past (or a past life?) or something and Zephyr’s simply blocking out of his memories, or whatever — nonetheless, it’s a bit of a trauma for him, seems like. So that part of the trial was pretty interesting. The pair was sometimes referred to as Orpheus and Eurydice and apparently relying on Vendetta’s powers is a sure-fire way to damn your soul to pain and oblivion and such, as the final scene with Zephyr very much demonstrated. Even Gin seems to know her somehow, which once again adds to the mystery. So like I said, I’m very curious as to wtf is going on with these two, and who Vendetta really is.

Vendetta herself is pretty cute btw, and has this habit of kinda not wearing clothes. And the Rusalka-voice is really doing its magic here. 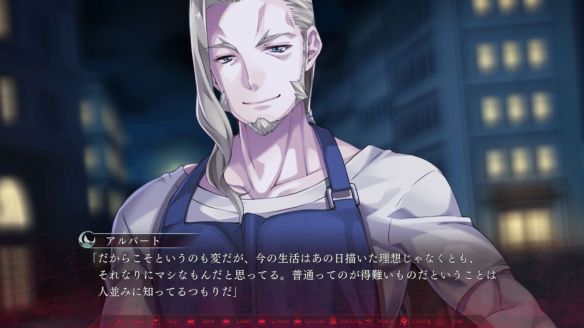 Uh, what else… oh, yeah. The Lucido x Vendetta scene. I enjoyed the fuck out of this scene, I’ll be honest. This guy is ridiculous and I love him. Oh, and the obvious Dies reference was also kinda cool, haha. Btw, while at first I wasn’t sure how to feel about the vocal BGMs, I’m kinda starting to warm up to them. They’re overall quite nice, though sometimes a bit wacky.

I suppose two more characters would require a quick mention as well, as both got some more screen time: Albert and Eve. The latter is a refined courtesan, the former is the owner of a bar in town. Both of them were in the first trial but neither left a lasting impression on me so I mostly skipped over them. I did end up kinda liking both in the second trial, though. I dunno, I find Eve’s motherly aspects to be a pretty cool character trait, and that she’s not really a lowly seductress (she is super lewd though! but I like that.) but someone who genuinely cares for Zephyr; using her body is just her way of healing a person’s emotional wounds and helping them forget whatever it is that troubles them. Hooker with a heart of gold? Something like that. 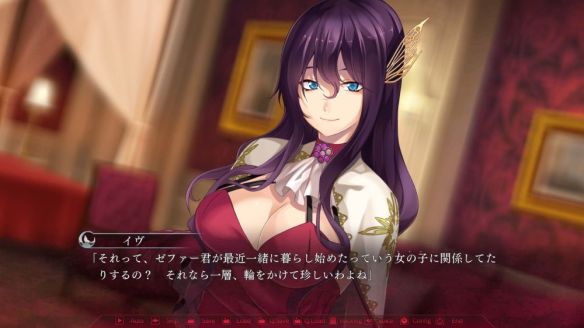 You *can* actually engage in a steamy H-scene with her if you so desire (she’s quite, um, well-equipped in the chest department), but it’s not forced, so if you opt out she’s just gonna keep Zephyr company and fall asleep by his side. I thought that was kinda cute, and really shows what kind of character she is. Albert didn’t have much of a role in Trial 1 but here he drew my attention due to the cool little pep talk he gives Zephyr near the end. I guess’s he’s a bit of a bro, and I like characters like that.

Then there’s the Chitose encounter near the end, which is pretty much what the first trial was teasing. She seems like a really interesting character, who’s still desperately in love with Zephyr and wants to force him to re-join the army so things could be like they were “back in the day”.

I enjoyed her thought process regarding the whole thing, how her past life with her grandfather and Zephyr at her side meant everything to her, and how she now wants to reclaim the “light” of those days. It’s also a bit sad that she can’t let go of the past to this extent (although Zephyr did choose to save Millie over her during the grand massacre), and overall I’m really curious what sort of relationship the two will have. There was also some more foreshadowing near the end with the mysterious mastermind at the very end, and some stuff about Vendetta being an Anti-Astral Weapon of sorts, but I’m guessing those are questions that will be answered in the full game. So yeah, overall I still can’t tell if this will be awesome or average, but it has the potential to be a decent read. The second trial held my attention more than the first one and I’ve grown to like a few characters. At the very least, I’d recommend giving the trials a shot.