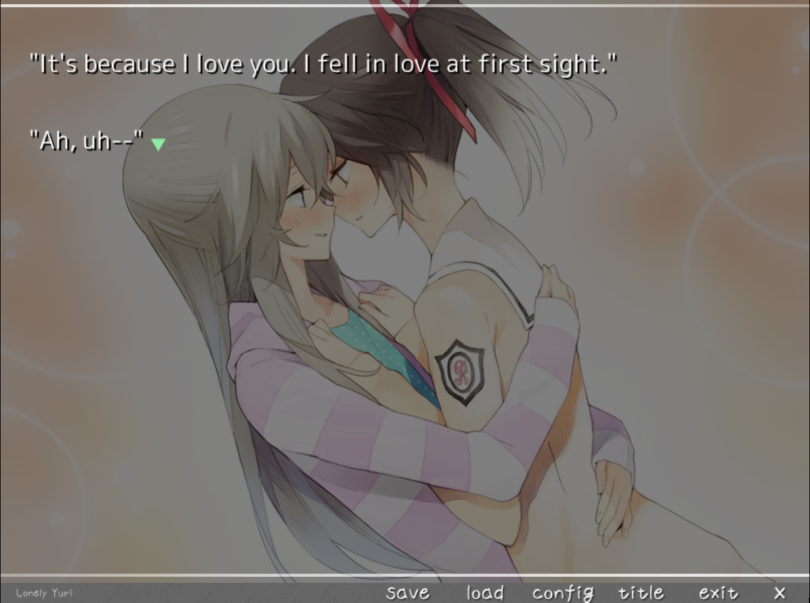 In a medium dominated by sex, tentacles, tentacle sex, sex without tentacles, and everything else revolving around sex, it’s not common you find a cute story that can draw you in without any real sex…or tentacles.  Released in the summer of 2011 by Night-Time Sheep, and translated into English roughly 18 months later, Lonely Yuri is a short read that explores the budding relationship between an unlikely combination of characters, but is it worth the two hours? This is a spoiler-free (and tentacle-free) review.

Lonely Yuri is very true to its title, and follows Fusa Konno, a first-year student at a public high school.  One day, her instructor asks her to deliver some paperwork to a fellow classmate who hadn’t attended a single day of class.  Fusa agrees to it, not really having any plans of her own.  After school that day, she runs through a rainstorm to her destination: an extremely upscale mansion, where a maid invites her in and asks her to make herself at home in their living room while she waited.  Some relaxation and an overwhelming amount of fatigue later, she awakens to an unknown girl kissing her, an affable hikikomori named Seri.  Fusa, being the serious girl that she is, is taken aback by this at first, but slowly succumbs to her advances, and embraces the feelings of togetherness.

For a short game and what was likely a very small budget, the developers cut the right things.  The game is lacking a lot of background; only a handful actually having them and the rest consisting of very light pastel colors, but the two characters are beautifully drawn.  They have just the right amount of emotion – Fusa’s constantly uptight, whereas Seri is much more laid back, and their mannerisms reflect that.  The music is also very simplistic, consisting of very little more than piano music and rainstorm tracks.  But, oddly enough, the music reminds the reader that romance can be bittersweet, and this one is no exception.

This game isn’t without flaws though.  Probably the biggest problem I had was the lack of QC on the piece.  An editing pass would have likely caught all of the basic spelling errors and general wording errors, and for a short piece like this, you need everything to be perfect in order to not be laughed off the block.  The menu system and lack of scene or music replay, which requires very little to implement, is also a minor setback.  I also sort of wish this game had more to it, but then again, I don’t want the delicate balance this game strikes to be ruined either.  It’s a complicated feeling.  This VN cuts it very close, but the content itself puts it a few points in the positive direction.

But overall, this two hour pure yuri story isn’t terrible.  In fact, it’s pretty good, and definitely a breath of fresh air from all of the ten–never mind, I said my review would not have any of those, and I keep my promises.  If you’re looking for a short read, definitely take a look at this one.  You can pick it up from DLSite (Here) for under ten bucks.

+ Does not have actual sex, but doesn’t actually need it.

- Needed an editing/QC pass to catch a lot of grammatical errors.

- Could be longer, but would require a lot of thought to do so.