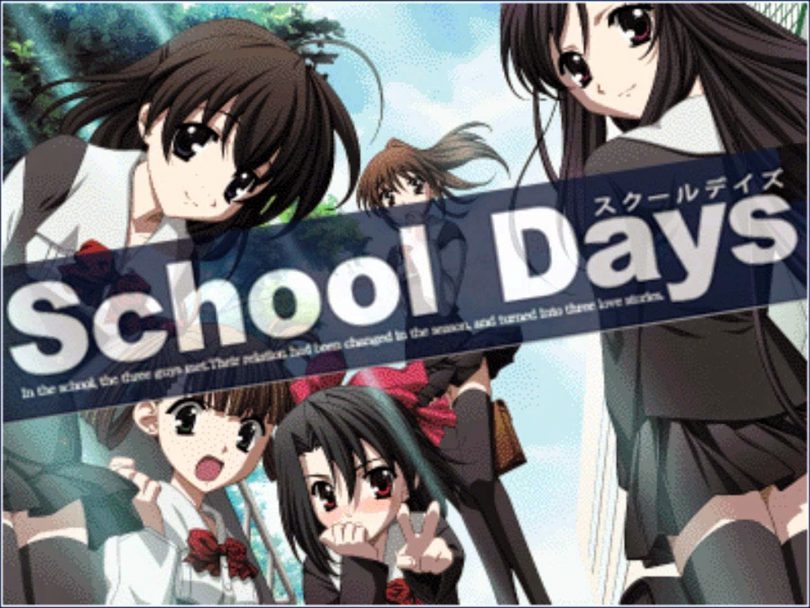 Well tough shit, I have yet to find a game that does it well.

If you’re a little bit knowledgeable about anime or visual novels, chances are you’ve already heard about the infamous School Days. Hated with a passion, regarded with disgust or liked “ironically”, nobody really starts School Days with the hope of finding a good piece of fiction. I myself am not a fan of watching/reading something because it’s “so bad it’s good” or because there’s worth to be found in its filth. However, since it seems to be solidbatman’s idea of a Christmas present to make me review this VN, I’ll give you a detailed report of why it is terrible and why you shouldn’t play it.

Because yes, I went to check and yes, breaking news, School Days is terrible. In fact, I think batman purposely chose me to review it to ensure that the reviewer would hate it. “Do I have a guy who hates love triangles, tends to dislike typical male leads, and will go autistic if the animation is bad? Oh look, Down fits all three, I’ll pick him”. I’m seriously considering changing my nick to liquidjoker and starting to scheme my revenge. Anyway, let’s get cracking. School Days is the usual, boring, bog standard high-school harem story. Makoto, who appears at first to be an average high-schooler, lives an ordinary life – to the exception that for some mysterious reason, absolutely all the girls in his school end up madly in love with him. Drama, love triangles, love dodecahedrons and lots of sex (let us remind ourselves that this is a porn game, after all) ensue. You have a gauge indicating your affinity with the two main girls, Kotonoha and Sekai, which moves when you’re an asshole to one of them (or both). …And that’s about all there is to say. But wait, this game has something particular to it. In fact, you could hardly call it a visual novel. Rather, in my opinion, School Days should be seen as an anime with choices. It might seem obvious but this implies judging it as an anime rather than a VN, which gives me a first point of grief. Because indeed, anime implies animation. Really. School Days is entirely animated… If you can call that animation. Aside from some jiggling during the H-scenes, it’s essentially made of a bunch of static shots. Most of the large shots are actually ugly 3D CGI, whereas the 2D shots are mostly close-ups of the characters’ faces. That’s already that much less to animate, but even then the amount of movement is minimal.

But lack of animation has never stopped talented people from making good anime, right? Well, too bad those people weren’t working on School Days. Even overlooking how cheap the animation is, there are still loads of things to complain about.

Like the direction, or lack thereof. The plans are some of the most uninspired I’ve ever seen in an anime, and considering how inspired third-rate series from third-rate studios are it’s pretty damn bad. Students who took cinema as an elective in high school would probably have done a better job. Most of the time, everything is a just a boring as hell shot/countershot dialogue, except when the staff had the idea of doing something worse like nonsensical splitting of screens even Tomino would be ashamed of.

And if only it stopped there! I think a lot of people don’t give a damn about the direction of what they’re watching, but there are more annoying things to come. Like the unbelievable laziness that transpires from the overall dramatic lack of synchronization of sounds, visual and text. Lip-sync breaks down all too often in a very noticeable way, but the worse is probably when the text says something and the screen shows something else because, I don’t know, it must have been too hard to animate. Don’t expect the faces of the characters to reflect any emotion either. I don’t really know what good it was to throw away the classic VN sprites for full-fledged animation if you exploit it for less than what a simple set of sprites would do.

Want more? Voicing has its moments too. The three main characters are more or less fine, aside from the fact that Makoto’s voice is strangely irritating. However the same can’t be said for the side characters, who often sound like they have no idea how they should say their line or have absurd changes of tone. The background music are rather bland and quickly forgotten, which is actually almost good already considering what the rest is like.

Okay, so School Days looks terrible and sounds terrible. But Down, I came for muh plot, I don’t care about that. Surely if the story is good enough, it makes up for it? I guess you already know the answer: no it doesn’t. It’s a bit of a personal taste here but I really find pure harem school life stories to be utterly boring, and School Days sure doesn’t do anything to spice it up. There’s almost no comedic element to speak of, aside from poor attempts quickly defused by the horrible animation and voice acting. There’s barely more to the plot than the love affairs of the characters. Therefore the characters are really the only thing there is to the story and they should have been carefully handled, but sadly they are actually poorly fleshed out. Makoto isn’t much more than a dumb and horny adolescent. You could argue that him being gratingly irritating is one of the point of the game, but he doesn’t even really have a fixed personality. Makoto suffers greatly from what I would call “choice syndrome”: some of the choices you can make throughout the game are pretty drastic in terms of what their consequences reveal about the character, but the fact that you can make both choices shows how arbitrary it is. In other words, you can’t see Makoto’s personality as anything else but an incoherent mess.

The other characters are barely better. Anyone but Kotonoha and Sekai is an insignificant walking plot device anyway. And I personally find the two main girls uninteresting. I don’t even really have anything to say about them: most of the characters in this game are dumb, boring, horny adolescents, but it’s not even their fault since most of the time their acts are completely arbitrary and only serve to add more sex scenes or to create a particular situation. So what’s good about this visual novel in the end? Well, I asked my fellow reviewer nohman and he gave me the answer: IT ENDS. Seriously, one good thing about School Days is its endings. And especially the bad endings. Because School Days has a bazillion different endings, and aside from the dull good endings where Makoto is almost faithful, there are also different bad endings leading you down the path of hell, be it a bloody hell or a hell of sexual deviancy. They are perfect ways to achieve catharsis by seeing those characters you hate being wrecked. And that’s probably the one weirdly attractive thing about this visual novel: it exerts a sort of morbid fascination for the lust and deviancy it contains. School Days is a game about vicariously witnessing characters being terrible human beings, and being a terrible human being along with them by wishing them dead and being strangely fascinated by their endless concupiscence.

If that sounds somewhat attractive to you, then you might want to try it. But honestly, while I haven’t seen it myself,  it’s probably better to just watch the anime at this point. It’s shorter, it has a bad end, and it should (hopefully) have slightly more decent animation. I don’t think I need to give a conclusion now, do I? I’d recommend this game to those who don’t like Evangelion or Muv-Luv Alternative, anyone I might hate for some reason, and constipated people.

So what's good about this visual novel in the end? Well, I asked my fellow reviewer nohman and he gave me the answer: IT ENDS.