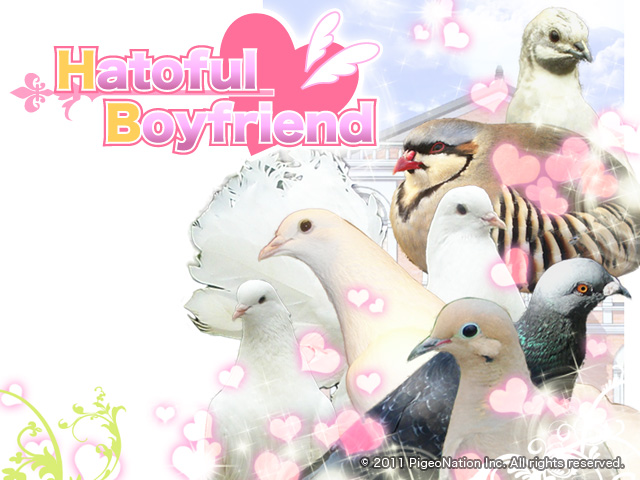 Hatoful Boyfriend, or Hatoful Kareshi, is the (in)famous pigeon visual novel/dating sim now available on Steam, and you really should play it.

The story of Hatoful Boyfriend is essentially split into two parts – the romance routes and the mystery route. The mystery route, Hurtful Boyfriend, is only unlocked after completing all the romance routes. Also, while I classify them as romance, they’re actually not that romantic, at least not in the sense of MC and her chosen pigeon flapping off into the sunset together.

At first having pigeons as the romantic interests seems like a gimmick, but actually it’s so much more than that. Finish all the routes and you’ll have your answers as to why pigeons can suddenly talk and are attending school, and the reasons behind that apocalyptic landscape when you go out for your run. The care and effort that has gone into creating a backstory for the setting is what elevates this from a silly, one-trick pony kind of game into something that’s truly engaging and has you caring about its feathered characters and wanting to find out their fates. The writing is also very good especially in the comedic parts, and there are plenty of bird-related puns to sigh at.

The second part, Hurtful Boyfriend, is crazy, dark, and really out there. If you don’t like far-fetched stories then… what are you doing playing a visual novel about pigeons anyway?!

Each character has something to discover about them that will be revealed with their individual ending. They pack an emotional punch but if you feel like they don’t go that deep don’t worry – there’s more to be revealed in the second part.

My favourite character has to be yandere doctor Shuu Iwamine, because School Days has ruined me for life and given me a thing for beheadings. The others also all have their own appeals, and each has a lovingly crafted history that makes you feel even closer to these feathered guys and will help you to understand why they are the way they are, while also giving your heartstrings a good old tug.

Obviously the main thing to get out of the way here is that all the character designs are photorealistic birds. There is also a classic anime-style design for each character thanks to a “powerful visualization module allowing even the birdiest of birds to appear as normal humans when first introduced”, however these are never actually seen in-game as sprites. It is actually a good decision not to give the option of using them throughout because, as mentioned earlier, the fact that these guys are birds really is relevant to the story.

I really liked the backgrounds, especially the use of light and dust motes in them. Overall everything was clean and vibrant.

The music is nice but nothing particularly special, there are also long periods of silence and the music tends to cut off quite abruptly when changing scenes. Out of the entire game there were two stand out pieces for me which were Nageki’s theme (Seijaku no Umi) and the tune Death Tone, but other than that I found the main theme became repetitive in a game of this length.

Hatoful Boyfriend is so much more than just pigeons. The story is a rollercoaster ride covering everything from comedy to romance to sci-fi to horror. It’s something you might pick up on a silly whim then find yourself hooked on, playing late into the night in order to find out what happens. I highly recommend it to all visual novel fans, male and female alike.