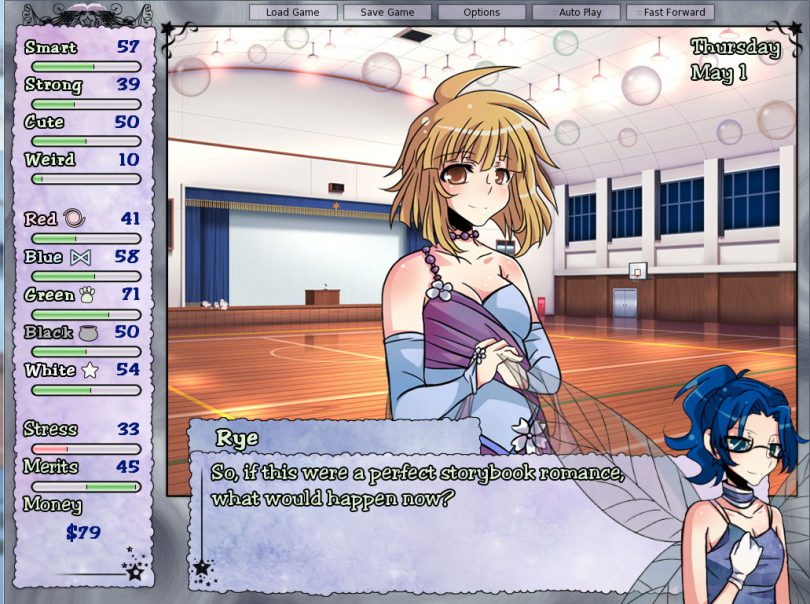 Released in 2011, Magical Diary: Horse Hall is an indie otome visual novel created by Hanako Games.  This story is about a High School Freshman going through her entire first year at a school for witches and wizards.  Magical Diary has a good story with plenty of replay value, but does it have enough actual content to make people want to take the time to play the game in the first place?

Magical Diary puts you in the shoes of a nameable and customizable female protagonist.  At the age of thirteen, you discover that you have suddenly gained the ability to cast magic.  Since your parents aren’t magical beings, you are called a “Wildseed.”  You are told that you cannot reveal your ability to use magic to any non-magic folk or else your memories will be wiped, you’ll lose the ability to use magic, and you will return to being a “normal” human being.

A few years later, you start attending Iris Academy, a boarding school for witches and wizards.  At Iris, you are placed into halls in a fashion similar to characters from the Harry Potter series and are put into dorms.  You end up in a dorm with Ellen, a fellow Wildseed, as well as Virginia, a born witch with older brothers who also attend Iris.  After settling in, you get to choose your own class schedule, including which magics you wish to study – each with its own benefits and uses.  You also have the option to study outside of class (to increase your Smarts, which translate to magic points usable during exams), or visit the gym (to increase strength, which translate to hit points), or even sleep to relieve stress.  Truancy, especially early on, will always result in disaster, but sometimes being in detention isn’t entirely a bad thing.  Throughout your stay at Iris Academy, you will also take exams that put you into a labyrinth with a single task:  Get out.  Each exam becomes progressively more difficult, but your arsenal of spells also increases as long as you choose to attend classes, and each puzzle has a large number of solutions.  A small suggestion:  Blue, White, and Black magic are amazing early on, but don’t slack on the other two.

One notable thing about Magical Diary is that there are a wide variety of heroes and heroines.  Among the six romancing options are your roommates, a teacher (which is easily the most comical route, as well as the most difficult route to get the perfect end on), and an assortment of students ranging from demons to some of your classmates.  There aren’t a lot of pieces that explore LGBT themes in the English visual novel scene, and this one addresses it by not addressing it at all – in other words, who cares?  Romance is romance, regardless of who it is between.  The author’s writing style is very carefree and fun when it needs to be, but also very serious when events call for it, and this allows for a very fulfilling story to be told.

The art style is very simplistic, but it is nonetheless well-drawn.  While the human characters (male and female) are drawn using the same exact body structures (to the point of only being able to tell them apart by what they’re wearing), the non-humans are all very extravagant in their looks.  The backgrounds are simplistic as well, but are reminiscent of a standard school.  A combination of jazz, classical, and lounge music complements the story quite nicely, but I could have done without the cheesy sound effects littered throughout the game.

Romance in this game is limited to a kiss – signifying that you have done everything to succeed in the route, so those who are interested in story and not H-scenes will be happy to know that this is an All-Ages title.  As with many other All-Ages titles lately, it is available on Steam, which therefore means there are also achievements to be had (many of which require reaching specific ends), further increasing the game’s replayability.  The Steam version also has additional scenes, including furthering one of the heroes’ routes.  In total, the game takes about 15 to 20 hours to complete fully, longer if you choose to not use the walkthrough or the wiki created by the developer.

Overall, this slice-of-life fantasy story is the result of good writing, memorable characters, just enough gameplay to whet your appetite (though if I’m going to complain about anything, I would have loved to had more), and enough smaller scenes to justify playing the game multiple times.  For an otome game, I had a lot of fun playing this, and you will, too.  You can purchase it for Steam Here, or from their Website, if you’re not a fan of Steam.

+ Gameplay isn't linear in fashion, there are many ways to solve the puzzles

+ Customizable protagonist offers a better connection with the player

- More gameplay would have been nice