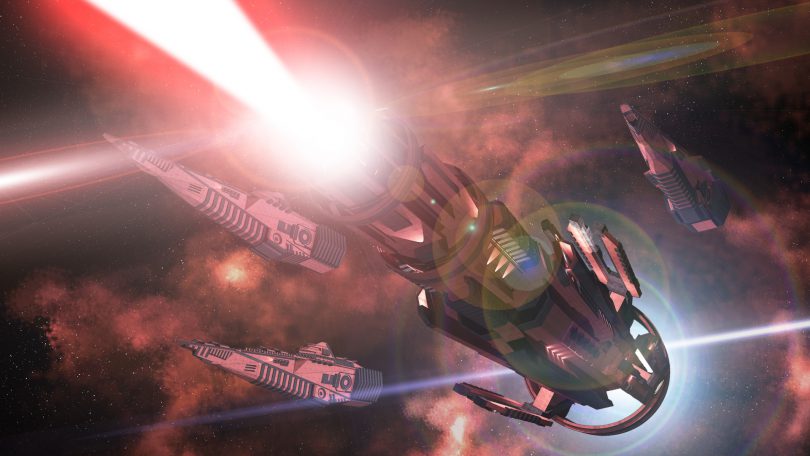 Sunrider is a multi-part, English-language visual novel filled out with segments of tactical RPG gameplay.  You assume the role of Kayto Shields, captain of the starship Sunrider, as he embarks on a mission to avenge his home planet of Cera and stave the galactic threat of the People’s Alliance. But does Sunrider read like a love letter to the space operas it tries to emulate or does it fall short and come across as a shallow imitation? Warning: This review contains spoilers for the first 10 minutes of Sunrider.

The plot of Sunrider kicks off hard and fast.  The galaxy is at war. The People’s Alliance for Common Treatment (PACT) has toppled the tyrannical New Empire and is now cutting a swathe of conquest across the neutral rim.  You assume the point of view of Kayto Shields, a green starship captain of the Cera Space Force, who has been trained to command the newly minted, highly advanced assault carrier Sunrider. After assuming command of the ship, Cera is suddenly attacked by the PACT main fleet. Narrowly escaping the utter destruction of the Cera Space Force and conquest of his home Planet, Captain Shields must retreat into the protection of space to gather crew members, supplies, and develop a plan in order to strike back against PACT.

In this abrupt way the stage is set, tossing the reader into the world of Sunrider with an on the nose, just a little too hastily characterized summation (a quick “this isn’t the end”) of the main character’s motivation. This actually serves as a decent sample of the quality of writing you’ll find across the length of the game and is Sunrider’s biggest fault. The writing can seem amateurish, with no hint of originality or even an interesting take on what you just might exactly expect from a space opera. That said, the story of Sunrider isn’t without merit. The emotional beats it takes have some impact and it does a good job in conveying a sense of uncertainty in the politicking surrounding the allegiances you must make. Furthermore, the game does a solid job at world building, giving the reader a lot of context regarding the universe of Sunrider. This is something I always personally appreciate in a science fiction setting.

Overall, the game does get more interesting as it progresses. First Arrival (obviously) serves to introduce the reader to the world of Sunrider, its cast of characters, and to familiarize the player with the game’s mechanics. There are some twists and turns along the way, but nothing I would call exceptional. Mask of Arcadius gets a little more interesting, ramping up the stakes and having the Sunrider take a more important role in the galactic conflict. In spite of weak writing, I did end up enjoying the story for what it’s worth.

As for choices, the reader is presented with a large number of them throughout the length of both First Arrival and Mask of Arcadius, but the impact seems mostly minimal (with perhaps a couple of notable exceptions on gameplay) in each respective part. It is yet to be seen how important these choices will be in the final installment, but my suspicion is that it will largely just tie into who you’ll end up romancing. While on the subject of romance, and as a commentary on the characters of Sunrider as a whole, it isn’t anything handled with nuance or even believability. Sunrider plays out like a harem anime, with the cast of heroines (for the most part) all head over heels in love with Captain Shields.  This will appeal to some, but given the dire setting, having the characters all behave like lovesick school girls seems… mismatched. On a semi-related note, this might actually be appropriate since the Cera Space Force uniform seems to be a schoolgirl uniform.

The presentation in Sunrider is more notable than the story, but it’s still a mixed bag. Individually each of the art assets are at least passable by my standards, with some I would even call excellent, but mixed together as a single product it leaves a lot to be desired. The 3D elements in the gameplay section look nice, but it doesn’t mesh well with the character sprites and CGs. Similarly the initial CG of the Sunrider itself is gorgeous (and it is presented very well, with the music and slow roll over the hull of the ship), but the difference in quality between that and the soon to follow character sprites is jarring. Furthermore, I found the interface of the game to be lacking. It is functional, but it is just simply awful looking. Altogether, Sunrider lacks what you might call a consistent, professional luster. How it looks aside, the music in the game is actually quite nice and fits the game very well. Above all else, this is the one aspect of Sunrider that comes across as professionally done.

As for the gameplay in Sunrider, it is enjoyable if not a bit tedious at times.  I played through the game on captain (normal difficulty) and it presented a respectable challenge, though everything is eventually conquered through trial and error. The game doesn’t fully go in depth to explain its mechanics, but it isn’t so complicated that any semi-interested reader won’t catch on to its systems. The upgrades you can get for the Sunrider present the reader with a number of options on how you specialize your ship. On normal, I managed to get through the game by haphazardly distributing these without a lot of real thought, but I suspect on the higher difficulties that mismanaging this will have a greater effect. To the game’s detriment, the combat animations get old quickly and from what I can tell there’s no way to disable them completely. You can skip through them with spacebar, but that itself can be a bit annoying and it has resulted in me accidently moving a unit where I didn’t intend to multiple times. This might be a bit of a nitpick, but to the credit of Sunrider, this was the largest fault I found with its gameplay. Overall, Sunrider is a mixed experience. The story is by no means well written, but there’s still some enjoyment to be found in it. It is inconsistent in its presentation, but certain elements of it do look nice. Furthermore, the soundtrack of Sunrider is excellent and the gameplay is all around solid. Best of all, the game is free – making the weaknesses of Sunrider far more palatable than it would be otherwise.

Overall, Sunrider is a mixed experience. The story is by no means well written, but there’s still some enjoyment to be found in it. It is inconsistent in its presentation, but certain elements of it do look nice. Furthermore, the soundtrack of Sunrider is excellent and the gameplay is all around solid. Best of all, the game is free - making the weaknesses of Sunrider far more palatable than it would be otherwise.