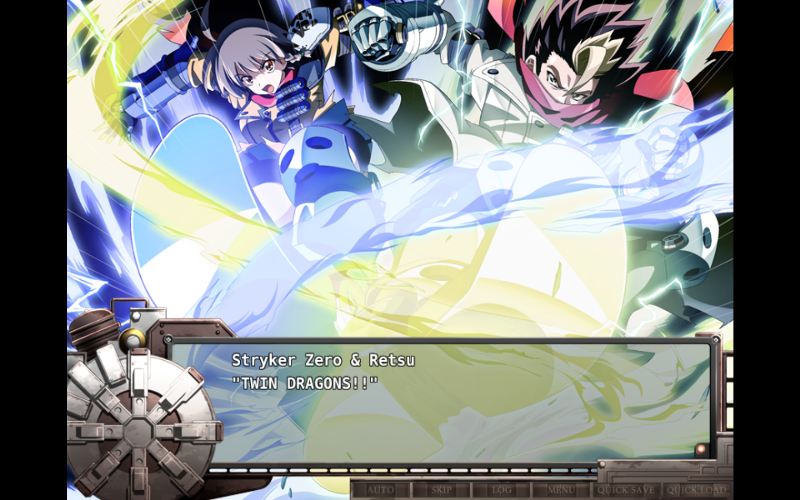 In the superhero Visual Novel sub-genre where a vast majority of superheroes are “Get that Girl!” Magical Girls, Cho Dengeki Stryker is a breath of fresh air to an otherwise pretty bland sub-genre.  While the story does follow a very generic pattern and can be easy to guess at times, OVERDRIVE’s keen attention to virtually everything, as exemplified through the top-notch voice cast and animated cut-scenes, make Cho Dengeki Stryker a title that deserves to be played. Warning:  This review is for the expansion of the Dengeki Stryker Visual Novel and may contain spoilers for the original Dengeki Stryker.

Created by OVERDRIVE and released in English on March 28, 2014 by MangaGamer, Cho Dengeki Stryker offers readers four additional endings, bringing the total number of endings between it and Dengeki Stryker to seven. Three of the four new endings branch off from the Zero Saga’s neutral end. This does mean that there is a lot of story you will need to reread again, and since in the original Dengeki Stryker the Zero Saga was a standalone story with a very weak ending, it’s not the most fun thing to begin with.  Additionally, those who have read the original Dengeki Stryker will also notice that in the Steel and Light Sagas, a lot of characters they’ve already met previously (in different playthroughs of the game, which you MUST complete before being able to play these routes) make reappearances here, some for the better, and some for the “will you just shut up and go away” worst.  However, a previously minor character comes to the forefront, and Cho introduces a new heroine in the form of Clie, who is most regards is quite similar to Yamato in personality, which leads to some very interesting and oftentimes comical conversations.

The fourth route that Cho introduces is akin to a story that one would find on a fandisk, and is a general “true love” story, complete with H-scenes of its own, as well as some insight on the background of previously minor characters.  It must be completed as well before being able to access the Light Saga and true ending of the game, and I would suggest reading it after completing the Steel Saga, so that you aren’t reading essentially the same thing three times in succession.  Ultimately, a sizable chunk of Cho is characters having realizations that you’ve known since three routes ago, characters you’ve already met being reintroduced, and many of the action scenes, especially early on, are recycled and can become tedious to read again. Probably the worst parts of the story were the essentially tacked on H-Scenes in the Steel Saga.  The choices are very obvious if you are aiming to court a specific heroine, but when you do so, you finish the story, and then get a “oh by the way here you go” H-Scene.  These two scenes are the only ones that are out of place in the entire story, and I wish more had been done to smoothly integrate them in the story. I’m not saying that the story is terrible.  In fact, it’s quite the opposite.  Overall the story is very well written.  It could easily be turned into a “Superhero tries to live a day-to-day normal life while fighting the big bad guy of the week” anime, and people would gobble it up.  There is enough drama, romance, action, and comedy to go around.  In short, Cho Dengeki Stryker does what the original Dengeki Stryker did, and does it better and for twice as long.  I just wish they had written it slightly differently to avoid the feelings of déjá vu I was having.

Cho Dengeki Stryker has a total of ten insert songs, and the physical copy of the game being released later this year by MangaGamer has a CD with those songs on it, as well as 40 BGMs.  For an OVERDRIVE piece, this much is expected, and they delivered.  From the generic happy-feeling bouncy tracks to the downright creepy songs towards the end of the series, there is a song for every mood.  Additionally, the voice cast for this game, including the protagonist, all fit their roles surprisingly well.  Kudos to the voice actor for Yamato, who took a rather brusque, no common sense character and breathed some life into him – that takes a lot of skill.

The art style is what one would expect from an OVERDRIVE title – crisp and clean.  All of their games have always had a high standard in this category, and Cho Dengeki Stryker is no exception.  Even the animated scenes are well done.  While not as high-quality of actual anime titles, the artists took the time to actually make every character, even the minor ones, unique and independent – and each scene is well-placed for maximum effectiveness.  While Cho only adds a single animated scene, that scene alone was definitely worth the time and effort they put into it.  Along with that scene, Cho attempts to break up some of the fight monotony encountered in the original Dengeki Stryker with updated sprites and CG, but I’m not completely sold that it fixed all of the more obvious problems. Overall, Cho Dengeki Stryker was a solid 40 hour read, and has something for everybody. The message that this story has is very strong, and I would suggest the All-Ages version to players who don’t care about the H-scenes and just want to read a fun superhero story that has just enough twists to not be boring, and more than enough action to keep them wanting more.  Definitely purchase Cho if you haven’t played the series at all, it’s worth it for the extra stories, and it has everything from the original Dengeki Stryker as well.  If you are interested in picking this up for your collection, MangaGamer has it for sale Here.  There is a physical copy also available as of November 24, 2014, through MangaGamer as well, and includes a CD with the Insert Songs, as well as an All-Ages Steam Code for the game, all packaged in a very sleek-looking case.

- Fight scenes are oftentimes recycled from previous scenes, and can get very repetitive

- H-scenes, especially the ones following the Steel Saga, could have been more integrated into the story