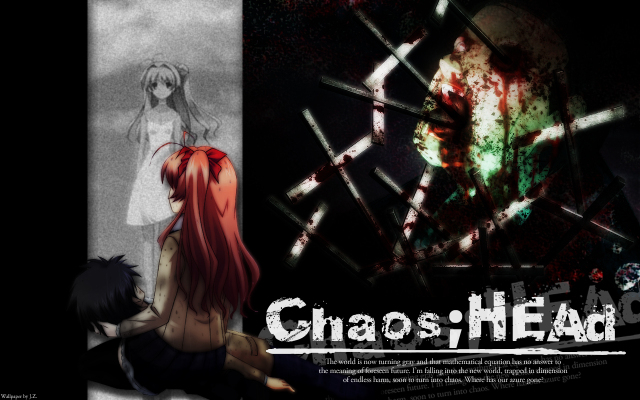 Chaos;Head and Steins;Gate are a pair of visual novels that are constantly compared to one another (mostly because both of their titles contain a semicolon), with Steins;Gate generally coming out on top in people’s minds. Both of them are developed by Nitroplus, who have yet to release a story that I’ve actually liked. Unfortunately Chaos;Head does nothing to break this trend and, in fact, may be the worst VN I’ve reviewed to date. There are just so many things it does wrong, with pacing and character development being foremost among them, balanced by far too few positive aspects. There’s something wrong when one of my favorite features of a visual novel is its relatively short length.

In a town beginning to go mad, Nishijou Takumi would have loved nothing more than to be left alone with his video games and anime figures. Fate, however, had other plans. Takumi finds himself witnessing one of the bizarre “New Gen” murders before finding the apparent culprit, a girl of whom he has no memory of whatsoever, was in fact a member of his class and had been his friend for months. Forgetting for a moment that he may be in the company of a murderer, he can’t even understand why a girl would associate with a cowardly, socially maladjusted loner like himself. In the face of others accusing him of the murder, freak earthquakes killing hundreds of people and crazy girls waving around deadly imaginary swords, she soon becomes the only person Takumi can rely on.

Often I have a lot of trouble trying to fit everything a visual novel is into a single summary paragraph. With Chaos;Head it becomes hard to do this for very different reasons. The story meanders along, staring dully at potential plotlines and dismissing them a few scenes later before finally rushing towards a hastily cobbled-together conclusion with all of the composure of an ant under a magnifying glass. The ideas it presents fit together so poorly that none of them really shine through as being important. There are some killings going on that are a bit weird and some girl racing around that thinks the protagonist is behind it all and another with some screws loose that shows up once in a blue moon and another with a big sword that loves leaving you in the dark about anything and everything and – I could go on for at least five more “ands” without giving you a good idea of what Chaos;Head wants to accomplish. If I add on to all that the fact the 7 (or more) of the 10 chapters are practically introduction to the final story “arc”, if you can call it that, I hope that you can form some sort of idea about just how confused Chaos;Head really is. I mean, the motivation of the antagonist isn’t even established until the very last scene, and his identity had only been revealed a few chapters before that anyway (not that it made any difference to how little he meant to the story overall). He’s not too bad, I suppose, if you consider that some of the characters’ actions get no explanation whatsoever.

The concept hidden within the murk of the VN’s plot isn’t a bad one though. I can’t really tell you anything about it without revealing some sort of spoiler, so you’ll just have to take my word for it. One of the unique features of Chaos;Head related to that idea, however, is that periodically throughout the visual novel you will be given the choice of having the protagonist experience a “good” or “bad” delusion (which just means day-dream in this case), or simply plow on through with reality. It sounds really cool in theory but doesn’t work out very well in this case. The problem is that the three options you can experience simply aren’t different enough to make you want to go back and try the other ones. Though I had started off by saving at each choice and trying out each of the delusions, by the time I was a few chapters in I just didn’t care. As a final note on the story itself, I want to briefly mention that much of what Chaos;Head is all about (from what I’ve been able to piece together, anyway), is based on incredibly shaky pseudo-science concepts that barely seem related. Their only purpose is to add some sort of façade of legitimacy to the plot’s events, which they only succeed in if you close your eyes and try to ignore their existence.

All right. This is where my criticism field-day really begins. The first and most obvious character to take issue with has to be the main one, but not for reasons you might expect. The protagonist is an irresponsible, whiny, ungrateful, cowardly, quivering blob of antisocialism which, while not something I would willingly choose to read about, is absolutely fine as long as you don’t care about forming connections to characters. What’s not fine is that after having spent the vast majority of the story consistently molding himself to those adjectives, he very rapidly morphs into a dependable, confident, badass, quivering blob of antisocialism after a single event for the sole purpose of fitting the conclusion Chaos;Head wants to show you. That kind of character “development” just doesn’t sit well with me. In addition to this the heroines (if you can call them that) are wholly underdeveloped because they simply don’t show up very often; they aren’t relevant for the majority of the novel. Their backstories aren’t crafted into the scenes they appear in so much as they are thrust at you simply because the heroines apparently all need to have backstories. It’s like the writer realized they needed to have more to them to keep them from being shallow but wasn’t quite sure how to accomplish it (and failed at it anyway). In fact, they remain mostly irrelevant to the ending of the VN as well, making me wonder why they were included at all.

Do Chaos;Head’s technical aspects provide a source of light at the end of the tunnel? The short answer is no. The long answer starts off with me saying that there is at least one factor to redeem this train-wreck of a visual novel. Some of the backgrounds you encounter as you’re reading are computer generated and 3-dimensional, and from time to time they’re put to good use. The protagonist can turn around and look at different parts of the room like they actually exist in 3D space and that was kind of novel. Unfortunately those same backgrounds look like early PSOne technology; that is to say…bad. The character art is of a decent quality and the issue I have here has more to do with their posing. The way they stand and hold themselves is just really unnatural in some cases, and some of their expressions follow suit. In its defence, if you wanted to argue the point you could probably get away with calling it an art style choice, I suppose. I don’t want to end this section on a negative note, so I will happily admit that Takumi’s voice actor does a wonderful job of portraying an irresponsible, whiny, ungrateful, cowardly, quivering blob of antisocialism.

Summary – I’ve been a bit harsh on Chaos;Head (partially because it’s fun to write harsh reviews) but the honest truth is that it deserves most of the criticism I’ve given it. Pacing, character development and story cohesiveness appear to be foreign concepts to this visual novel, and though I’ve seen positive opinions of it I simply can’t fathom why they exist in this case. I had to really search for the few compliments I gave it and that’s an incredibly rare position for me to find myself in. It’s relatively short at least, so that’s a positive if you find that you really have to give it a go.