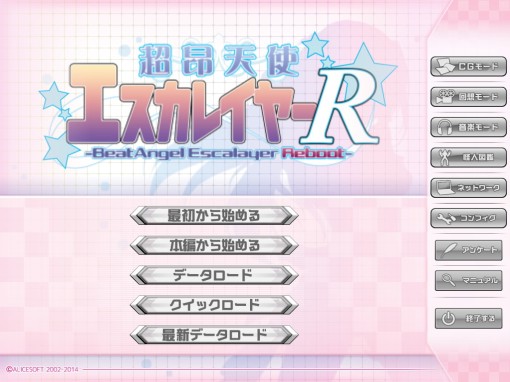 Hey yo, it’s Mr. Mysterywarumherp here and once again it’s up to me to keep this sinking ship afloat with SOME sort of update and what better way to do it than writing about pr0n? It is truly what this blog needs and I’m here to bring the ero-oasis in this barren wasteland. Or I would if wordpress wasn’t so stingy with its decency rules. BAH!

Does Beat Angel Escalayer need a reboot? I have no freaking clue but maybe Alicesoft is burned out from making the bajillionth Rance sequel and need some quick funds after that disastrous space game my alter-ego enjoyed. Whatever the case, the reboot is basically a repackage of the old game with some new bells and whistles. I’ll break it down for the rest of you peeps.

Beat Angel Escalayer is essentially a dice-rolling, battle simulator. The main male, Kyohei, is a regular guy who is dragged into an invasion by Dai-Lust, an evil organization who are…well evil. The only obstacle to global domination is Beat Angel Escalayer, a heroine of justice who has the power to rival theirs. The thing is she needs energy and the only way to obtain it is through- yeah we know where this is going.

I’ve perfected my rolls with many Monopoly games. I got this.

The recurring themes and game mechanics with the Beat series is that much of it is based on chance. The way to receive points for increasing stats is by ROLLING DA DICE and hoping to reach the required number to unlock the “power-up scene.” Escalayer takes the luck factor a step more through its battle system. You can choose what battle moves to take, but the game will practically choose what skills you can activate by randomization. Some skills may take more than one turn to activate and it might not always be the one you want. I honestly believed Alicesoft was on drugs when they thought this system would be fun and engaging. After playing Beat Blades Haruka, I thought this was a downgrade and the reboot could at least update it to be less RNG-based, but what do I know? Let’s get on with what Alicesoft did upgrade.

The first and most important feature is the option for the main heroine to wear her glasses or not. This is vital to all game design and should be utilized by every single eroge company if they wish to be serious in this business. Not everyone is a megane freak and kudos to Alicesoft for giving the reader meaningful choices that can make or break viewer satisfaction. If it wasn’t for this, I might not have played the game in the first place. All those years of engine testing have finally paid dividends.

Secondly, there is a necessary event CG upgrade in higher resolution. This is also important for newfags like me who have higher standards in art quality. I’m a fawking connoisseur and I demand only the best for my fapping pleasure. Can you blame me when the entire industry is failing in everything else like story and gameplay? I’ll take what I can get and if there’s one thing eroge companies haven’t completely bungled up on it is the SEX.

Other than that, there doesn’t seem to be much rebooting in this reboot. In fact, the general consensus is this is a conservative remake and everything else is almost identical to the original other than some minor visual changes. I THINK some of the skills have changed from one-usage to permanent but I can’t confirm. Regrettably, there is very little content for the alternative bishoujos besides the main heroine, Sakuya. I felt expanding on the storyline/alternate routes was a missed opportunity but that is me nitpicking.

It’s work-safe because of the mosaics.

Perhaps the selling point of Beat Angel Escalayer is the smorgasbord of ero-scenes. Depending on how the player wishes to approach the game, there is a huge variety ranging from lovemaking to hardcore discipline. There are also “defeat” scenes with the bosses which could be used as an opportunity to power up Sakuya at the cost of her humanity. There is an option to skip the dark stuff. Personally, I avoided most of it and conquered with the power of love. However due to plot necessity, there will be unavoidable scenarios so this game is not for the squeamish. But hey, Sakuya’s body is actually real but a bio-body and her untainted human body is hidden underground in a science lab. HURRAH FOR THE POWER OF SCIENCE AMIRITE?

For the most part, the battles are mostly about pumping up the stats and manipulating the RNG so it won’t be too overwhelming. While the loss scenes are really dark, the bosses themselves are so over-the-top to the point of ridiculousness. For example there’s a book monster that trap citizens in a library and forces them to write book reports. There is a devil woman who fires a gun that impregnates people and it doesn’t matter if they are a man or a woman. Of course, the female bosses get ‘victory raped with good cause’ when defeated in order to save them from the Dai-Lust corruption. But the ero-scenes are so absurd that it is hard to take it seriously.

Ya know how hard it is to find normal CG’s?!

It’s the main heroine and where the majority of the fapping scenes go to. Personally, I think she’s an attractive character and the short skits between battles bring much needed characterization and show off her appealing traits. Sakuya is a good, earnest girl and Kyohei is pretty much an idiot and won’t notice her feelings until the drama kicks in during the latter half of the plot. Also it’s Taguchi Hiroko mang. That’s more than enough reason to play this game.

Did I already mention Kyohei is an idiot and snubbed her off when they were kids?

This is one of the few CG’s where she’s not flat out naked.

However, the support android is my ALL TIME FAVORITE BISHOUJO in the game. Madoka is the intelligence officer of the team and armed to the teeth with firearms. Despite her monotone voice, she has spunk and snark. I also like AYA and am saddened that I hadn’t heard much from her after Moshiraba. I had to beat the game twice to unlock her route and it wasn’t even that long which was a huge downer. I wanted to see more of her melting into deredere mode. 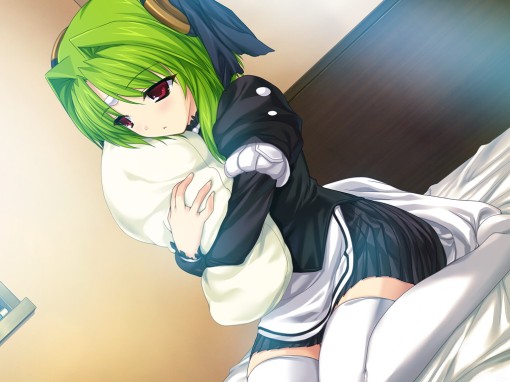 Like I said, I’M DIGGING THROUGH EVERYTHING I HAVE.

So there you have it. If any of you fine aficionados like battle nukiges that’s a parody of the superhero genre with surprisingly dark consequences, this might be your game. I still think Beat Blades Haruka is more representative of the genre but this one has its own merits as well. Now to wait for Blade Briders!

Now it is time to wait for warum to break out of the dark depths of his depression and to actually write something. Or maybe it’s already too late…