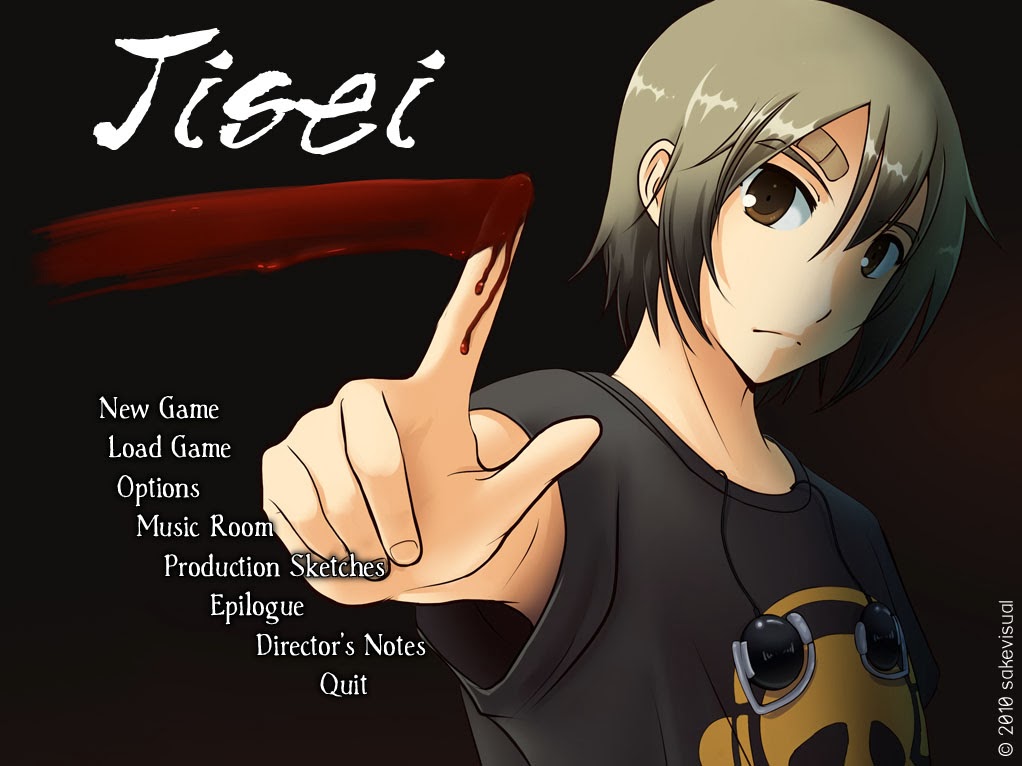 An unnamed teengaer with no apparent family or ties wanders from city to city, burdened by the weight of the peculiar ability of re-living the final moments of a persons life by touching their corpse. While hanging out in a coffee shop, he unknowingly steps into a murder mystery when he comes across the fresh corpse of a woman in the bathroom, and as a result becomes the main suspect. In order to prove his innocence, he sets out to unravel the mystery and discover the true murderer.
During his investigation, he stumbles across another mystery as an unknown voice begins to talk to him in his head, seeking to help him crack the case for reasons unknown. Who is this strange voice in his head, and what does it have to gain from him uncovering the culprit? What deeper mystery lies behind this unknown teenagers face, and what is he truly running away from? 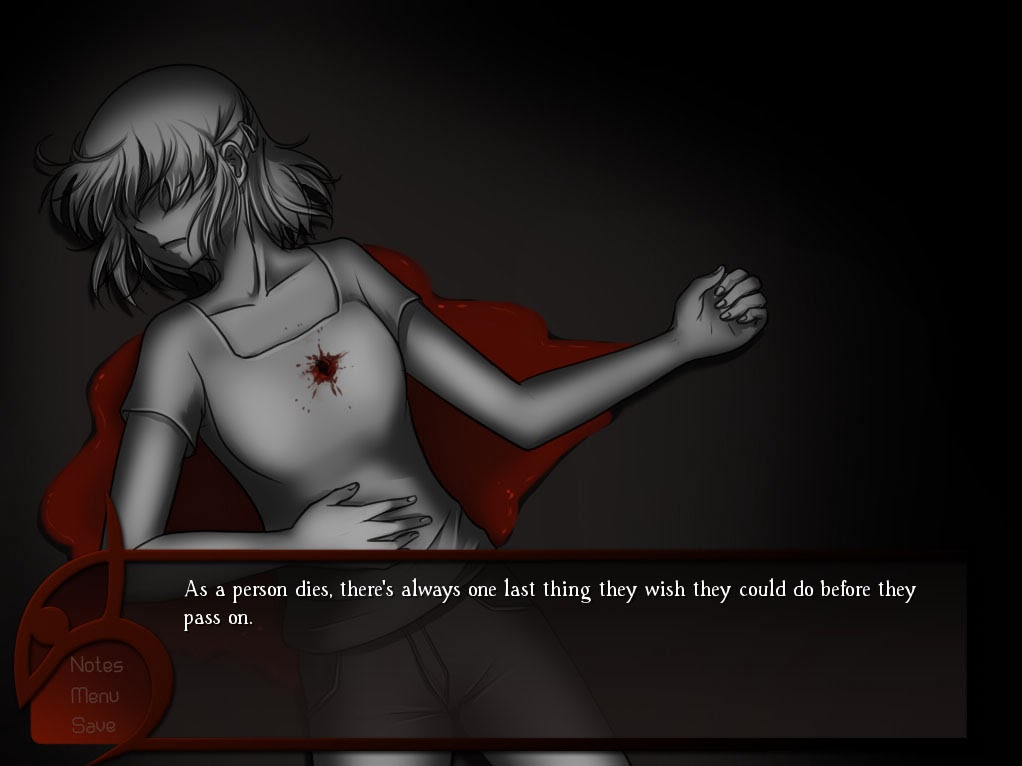 As stated in the prologue, Jisei is a murder mystery starring an unnamed protagonist who unwillingly gets thrown into the investigation of a dead woman at a coffee shop. Protag-Kun is a teenage boy with the ability to see a persons last moments alive when he touches their corpse, and serves as the starting point for the investigation. What first tips him off to a dead body in the area is his ability to also in a way sense a nearby corpse. While looking at the body, a random patron catches you and calls an off the clock officer by the name of Mikolaj Gurski, who happens to be in the cafe, causing protag-kun to be the prime suspect for the murder. In order to prove his innocence, protag-kun makes a deal with Mikolaj that he will help with the investigation and uncover the murderer. Pretty much the entirety of the Visual Novel is spent going back and forth between areas to speak with Mikolaj, the barista, and the two other patrons who were in the coffee shop when the body was found. 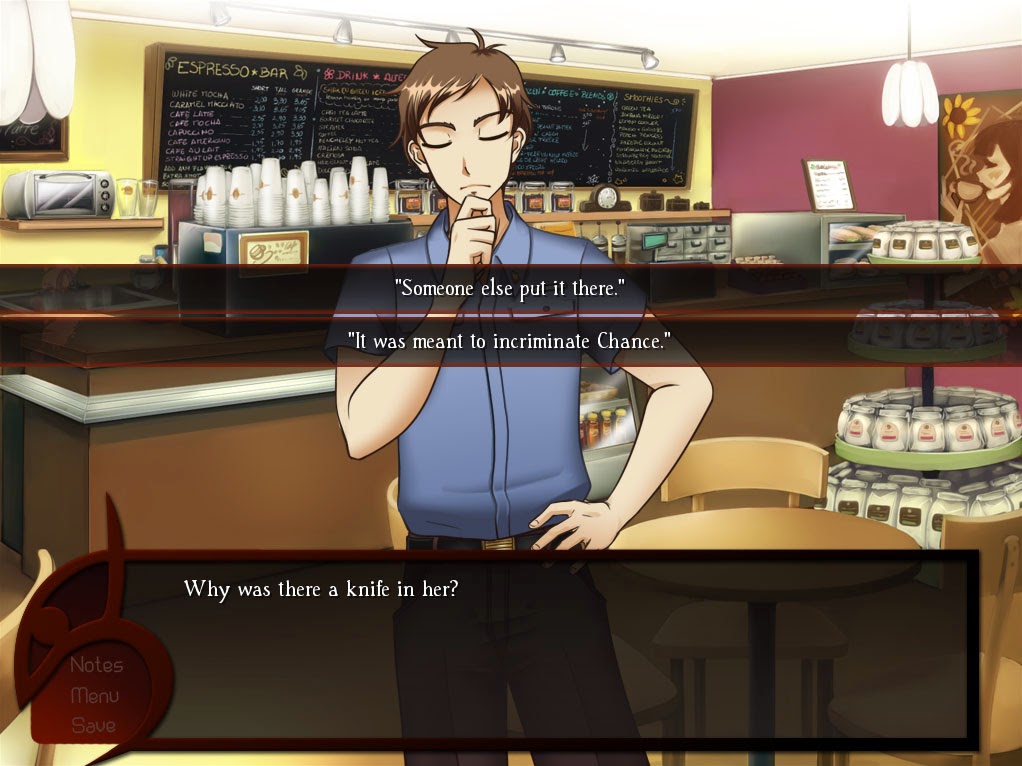 As the player, your only real input and part in the investigation is merely moving around the four areas of the cafe (Main area, hallway, womens bathroom, and mens bathroom) several times. The game features no real gameplay, and instead the investigation is played out with choices such as where to “investigate” next and who to question/interrogate. Investigation choices are severely limited and as such it is, in my opinion, impossible to miss any clues or information you may need. The game also pretty much guides you to which area you need to go to, but even in the rare instances you wern’t told outright where to go by either protag-kun’s inner voice or the voice in your head, you don’t really waste much time just randomly searching everywhere since, as stated, your choices are limited. This is good for players who don’t really want to spend a lot of time figuring things out, but it was a negative for me because I felt like I was being “hand-held” through the game and I actually wanted some challenge. The game also made the culprit pretty obvious very quickly in the game to me after about the first couple rounds of interrogations, taking away any suspense or real interest in the game. The game ends shortly after you confront the true culprit of the game. 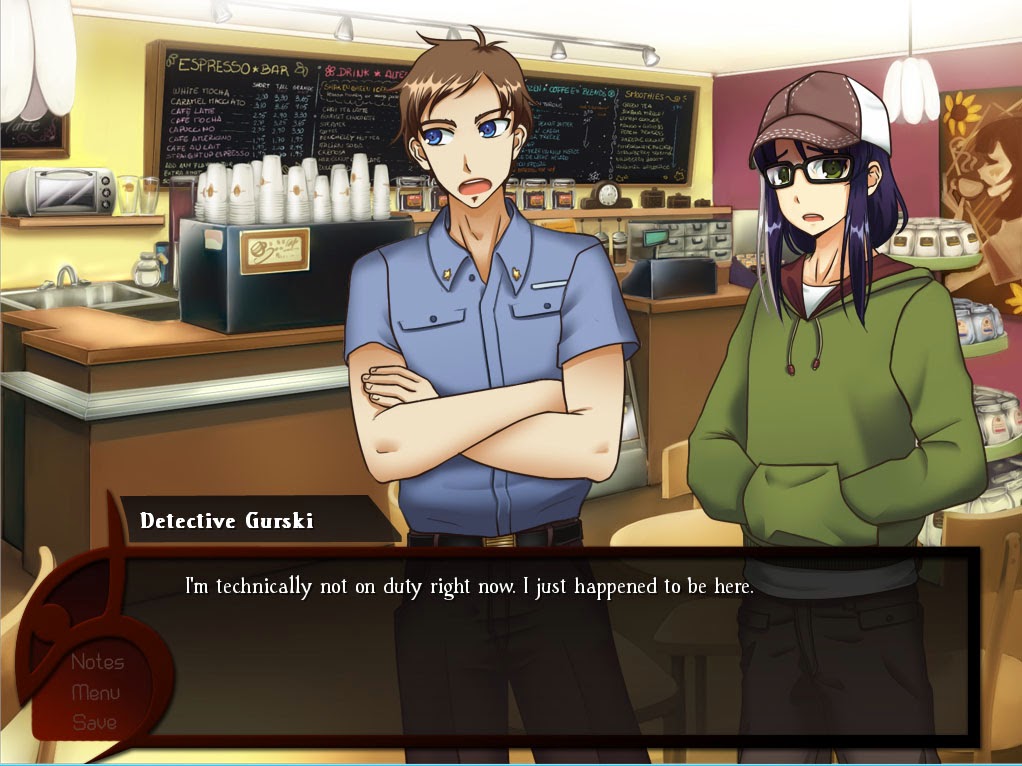 Due to the short nature of the game, there is not really much character development although most of the game is spent getting to know some basic information about the characters during your interrogations. You do get a general feel of each characters personality and general information on them such as occupation, a couple likes, etc, though. Because of this, I can’t really comment too much on the characters, but I do know that Gurski and Naoki play bigger parts in the sequels so their characters may become more fleshed out in the later installments. There was nothing too special about the characters in the first game due to this, although Gurski comes off as your typical good cop, and Naoki seems to have more to him than meets the eye. The main character is also another mystery to the overall story, as he evades any of the characters attempts to glean any personal information from him, and so his identity, past, and origins remain a complete mystery through the whole game. Whenever a character asked for even his name, his response was “I’d rather not say”. 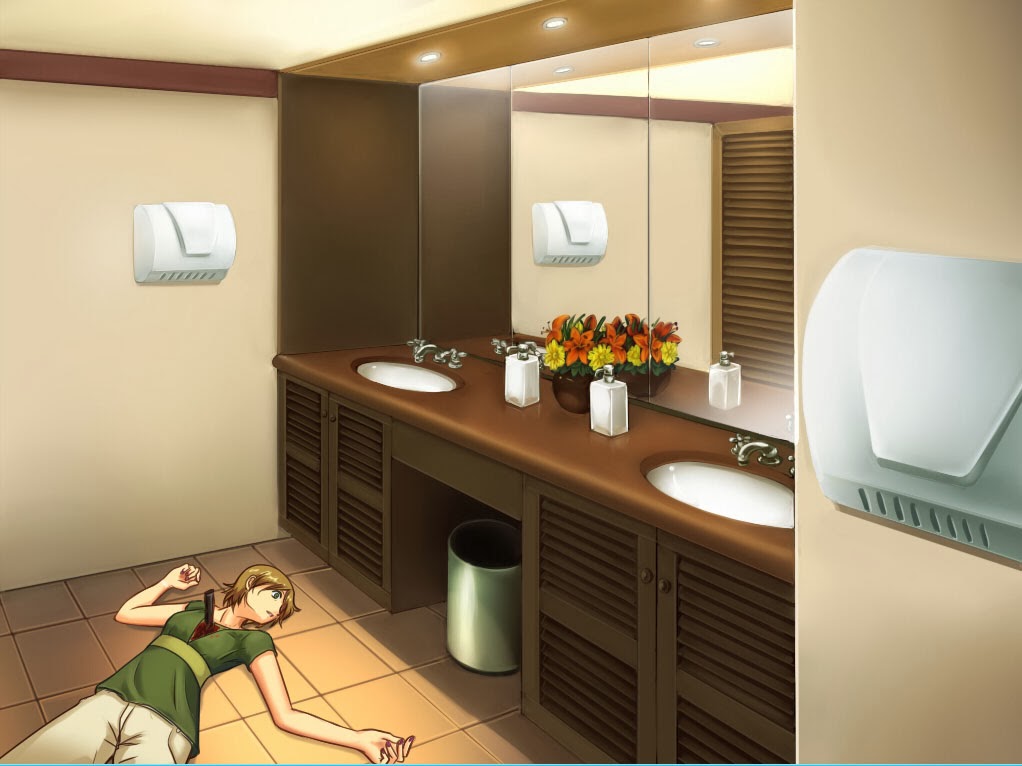 The art, while nothing amazing, was relatively pleasant to look at and the small amount of BGs utilized were fairly well detailed. The character designs were fairly simple and nothing special, but I will note that I really liked Naoki’s character design and how he is similar but opposite to Aki’s design in a sort of yin and yang way. Paper dolls variations were very simplistic and very few, with just a couple different facial expressions and one or so different hand/body gestures. The main characters paper doll was a small portrait on the text box when he spoke, utilizing only a couple varied facial expressions. I was not a big fan of Chance’s character design, as it reminded me a lot of the flower girl from Summer in Fairbrook, which was done by the same artist as Jisei. The game also features voice acting for the 4 characters you interact with (Protag-kun is unvoiced) and like the art, was not really good or bad. My biggest complaint about the voice acting was the quality, which varied per character and I could clearly tell the difference between the VAs who had good sound recording equipment and those who probably just used a regular microphone to record their lines. It wasn’t early anime era dub quality, but it also wasn’t even close to JP VAing, which is understandable considering the English VN voice acting pool and the budget of an indie title. I just wish there had been some sort of uniform quality standard between all the characters and more, well, character to the acting. 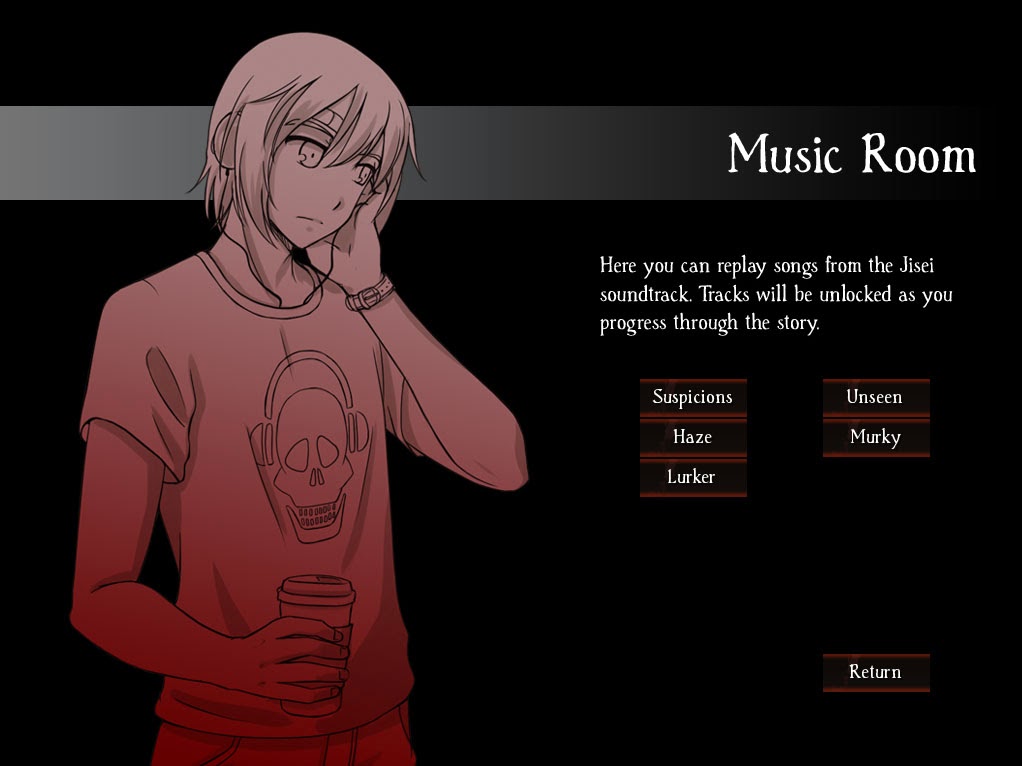 The game featured a few menu extras unlocked after beating the game. These were a music room, where you could play the few BGM tracks that were featured in the game (And surprisingly were not that bad. “Suspicions” was probably my favorite), a production sketch room with a bunch of black and white sketches, a short 1-2 minute epilogue that sort of bridges between Jisei and Kansei and answers a question while posing a new one, and directors notes, which features some basic information about the development of the game and how it came to be. There was no CG room as most VN extras have due to the fact that the game featured no real CGs (Again, utilized cut-ins). It would have been nice to be able to view the cut-ins though. 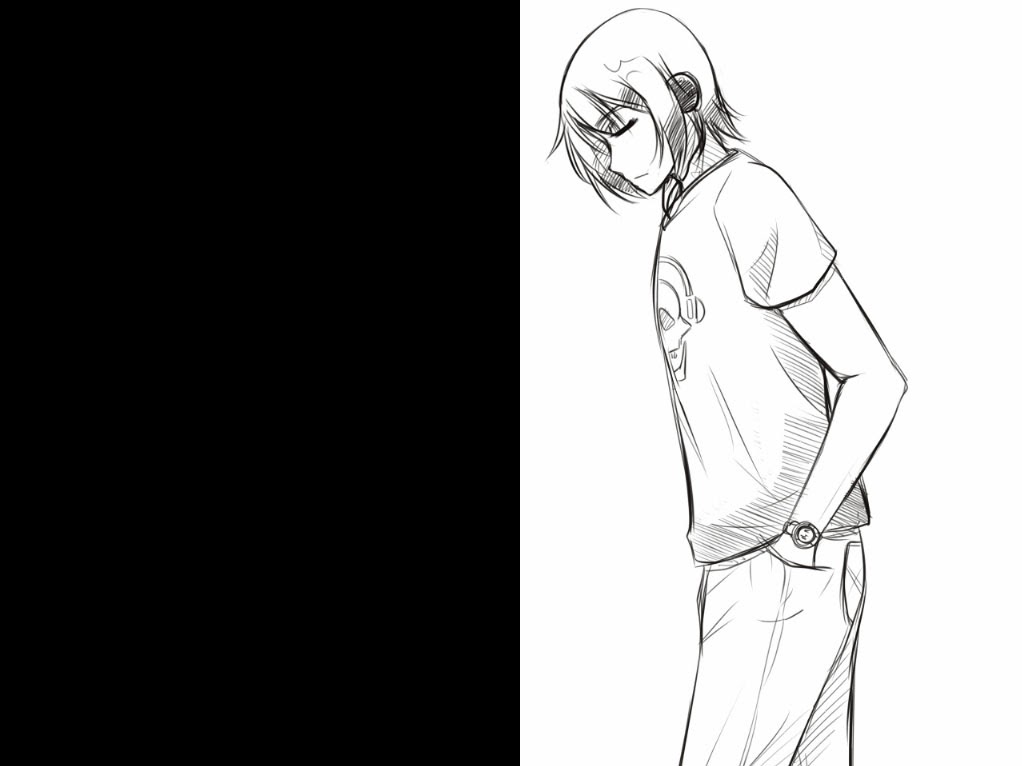 Overall, Jisei was an OK experience. I didn’t hate it, but I didn’t really like or enjoy my experience. Maybe I’m just spoiled from amazing mystery stories such as that of Kara No Shoujo, but the games murder mystery did not leave me shocked, awed, stumped, surprised, or even suspenseful, and for me I feel like a mystery, especially murder mysteries, need to grab hold of you by your bootstraps and take you for a ride. Quite a few people have praised the game (And Sakevisual has managed to make two sequels with a third on the way without hitting problems such as Dysfunctional Systems has, so it’s probably done pretty good financially), but I fail to see how people find it an interesting/good mystery story. As of late, I have been finding that I am in the minority of viewpoints as of late with my hatred for the highly acclaimed Starry Sky ~In Spring~ and now my lackluster feelings for Jisei.
I will however be continuing onto the sequel, Kansei. While I did receive the Jisei/Kansei bundle for Christmas and so I feel like I should play it because I have it, I’m interested in seeing if it’s sequel surpases its predecessor. The mystery surrounding the unnamed protagonist and the underlying mystery attached to the murder has enough possibilities to have me willingly dive into it despite my disappointment in Jisei. If you’re one for fairly simple mysteries that are not really dark or thought invoking, you might like this game. However, if you have expectations like mine and enjoy a deep mystery that will have you guessing for most of the game, you probably want to steer clear of this title, lest you fall prey to the monotony of a mystery an elementary school kid could probably figure out within the first 20 minutes.
Final Score: 66%
Voiced VN, which is rare in the English VN scene (The only other voiced indie I’ve played so far was Shira Oka). Voice acting, while not GREAT, was not ear jarringly terrible. Protagonist’s veiled past has good potential for possibilities, and the twins seem like characters that could become interesting down the road; The main characters “ability”, while not new or unique, is a concept I’ve always found interesting. Decent musical tracks and character designs. Possible good potential with the “underlying true mystery”
Cons:
Uninteresting murder mystery, flat characters, guessed true culprit extremely quickly, deductions require no real thought, mystery genre does not fit well with the games very short length, failed to be interesting or unique, failed to engage me with both the characters and the mystery, and the mystery itself was very cliche, predictable, and cut and paste. Also, no CGs (Unless you count the initial murder scene image), just cut-ins. The vocals in the OP made me cringe.
Release Info:
Available for sale in English in digital format
VN by Sakevisual
13+ Visual Novel
Purchase Jisei from Sakevisual or the Jisei/Kansei bundle from Mangagamer!