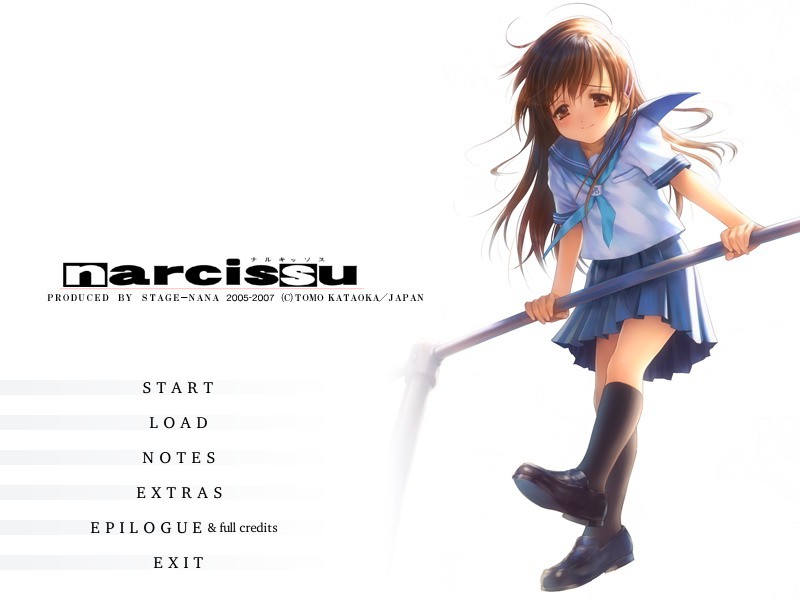 Narcissu -2nd Side- is a short kinetic novel about terminal illness, death, and religion. It’s the prequel to Narcissu, and it’s recommended to play 2nd Side first, which is what I did. This review is for the English version of the game.

Himeko is a lively young woman with a love of cars and a Catholic past. She’s also dying. After the prologue, we move to Setsumi’s POV, where she is befriended by the ever-cheerful Himeko, and gets roped into helping her complete her list of things she wants to do before she dies.

Setsumi is also ill, and at first it seems as though Himeko is helping her come to terms with it, but by the end we can see that it’s actually the other way around. Throughout the novel, the two have numerous, mostly one-sided, conversations that indirectly address the tragedy of a young life cut short, and the people who are left behind. Along the way we also see flashbacks to Himeko’s past, and see the reasons behind her loss of faith.

The downside is that, although it’s short, it’s quite slow, and is mostly exposition or repetitive conversation between Setsumi and Himeko. So… I got bored. Really bored. I had no real motivation to see what happened next. There were also aspects that featured heavily in the earlier part of the game but seemed to have been forgotten by the end, such as the Setsumi’s dilemma over the fries, which I was actually really interested in. Furthermore, as a non-religious person, I couldn’t really identify with the angst over why God would seemingly abandon his devoted followers. As far as I see it, sometimes life is just unfair.

There were some parts that were quite moving but others, such as Himeko’s flashbacks, seemed overly saccharine. I also never really got the sense that death was truly approaching Himeko. I understand the decision to be vague about her illness, but the narrative doesn’t give any real reason for why Himeko is in the hospice rather than at home, since she can seemingly live relatively normally.

I applaud the game for it’s themes – these kinds of more serious topics are underrepresented in the VN genre – but wish they had been woven into a more interesting overarching storyline.

As I played 2nd side before playing Narcissu, I didn’t really know Setsumi at this stage, and found her extremely boring. She seems only to be a part of this story in order to reveal Himeko’s past. She barely speaks, and when she does it’s in a monotone. Maybe after playing Narcissu I’ll have a different opinion of her.

Himeko on the other hand is a fascinating lady, and we gradually come to understand her through flashbacks and her interactions with Setsumi. She still has her secrets at the end, but we’ve been through a psychological journey with her as she grapples with the feelings that come from being a ‘Nello’ who understands what it is to have been an ‘Aloise’, and moves towards a reconciliation with her God. There were things her character said and did that I still don’t quite understand, but I think that speaks to a complex portrayal of human nature rather than bad writing.

There were a couple of other supporting characters: Yuka was fun, and it’s a shame we didn’t get to see more of her; Chihiro was just sort of there, being pious.

The scenery artwork is beautiful. Unfortunately the art is limited to a small strip in the centre of the screen, although we get very occasional full-screen pieces which feel very special.

Himeko’s seiyuu is fantastic, but I really hated Setsumi’s parts so I’m knocking off points for that. The music is lovely and the other sound effects are all realistic, well-timed, and helped bring the story to life. Unfortunately the music is not always well-synced, and cuts off abruptly at the end of each section (perhaps it syncs up properly when it’s on auto-play mode?).

Narcissu explores some deep themes with a sometimes deft, but often heavy-handed, touch. It’s an emotional and tragic journey that leaves a lot to think on, but I personally didn’t find it as engaging as I had hoped.