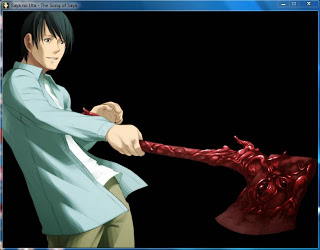 Well, given how all I’ve been covering this Halloween have been imported eroge and the sadly limited amount of horror themed eroge available in English, this review was probably to be expected. Seeing as how mediocre Insai no Shima was it just wouldn’t do to end this year’s Halloween on a low note and so for that we’ll be taking a look at Nitro+’s classic horror romance eroge, released by JAST USA on May 6, 2013, Saya no Uta.

WTF?!: From Fuminori’s perspective, every weapon looks like the Soul Edge.

Saya no Uta tells the story of Fuminori Sakisaka, an unfortunate young man who is the only survivor of a car crash that claims the lives of his parents. Yet that is the least Fuminori has lost as the injuries he suffered were so severe one of the treatments he had to undergo was brain surgery and the aftermath has left him with a warped view of the world around him. To Fuminori his surroundings appear to be mounds of twisted flesh, people appear as completely repulsive monsters, and everything…