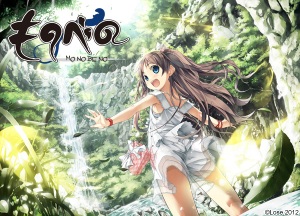 Monobeno is a 2012 game by Lose. It has a fandisc, Monobeno -happy end-, coming up next month.

Sawai Tooru and his (blood related) younger sister Natsuha ventures back to their rural home town Monobeno – their first visit in six years. Here they reunite with their childhood friend Arisu, and Sumi, a home protecting youkai (not a Zashiki-warashi) of Sawai’s house.

After their nostalgic reunion it was not long before the town readies itself for the night of Himemiya Summer Festival. During the festival, the Monobeno’s ancient, ‘Face Dance’ was being performed when Natsuha suddenly collapsed and was rushed home. That night, Natsuha grew a whole 10cm, her body undergone rapid changes and her lower body bled for the first time. Tooru, fearing for his imouto’s life hastened in his search of a cure…

The first thing you notice about Monobeno is the high production values. Literally the first thing, with a falling leaves effect in the title screen (which seems also to very pretty taxing in resources; older machines may have trouble playing this). It doesn’t stop there; with gorgeous backgrounds, lots of clothes variations for the main heroines (except Sumi, who as a youkai… doesn’t need/want to change clothes I guess?), and a ton of CGs, it’s a truly pretty game. And the mouth flapping and blinking effects are even in the CGs, getting in this aspect a point over even Witch’s Garden. The system is also pretty, fancy, and functional, surpassing the likes of Eustia and Daitosho, with things like the ability to replay or start from any scene. 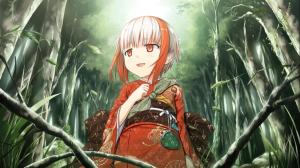 But of course one is not playing a visual novel only because it’s pretty; and the story department is not up to par with the graphical aspects. It’s not bad, just kind of… not as good. There’s basically a single plot thread: the sudden growth of Natsuha, and how to stop/reverse it; and each route is a different approach to that problem. After the common route (which is more of a long prologue -or Proloag, as is written in the game), where the setting and characters are presented and you get a bit of slice of life, you can choose to either team up with Sumi to see if there’s some kind of curse upon Natsuha, or with Arisu (the daughter of the village doctor), to see if she’s instead afflicted with some strange sickness.

Both routes thus progress with the main character and the chosen girl researching the cause of the problem and trying to contain the growth, and in the process getting closer. Which happens easily; in that romantic aspect there’s almost zero drama, since all the heroines start with max affection for Tooru, so as soon as he says “let’s make out” they become a couple. Which means that the routes can focus on the main problem and don’t get diverted, which is a good thing (it also means that there’s not a lot of icha-icha, if that’s what you are looking for). And though these two routes have interesting questions and developments (especially Sumi one, the closest example of a route in which everything goes to hell), most questions don’t really get answered, and the conclusion is somewhat ambivalent; though there’s a happily ever after for the couple, with regards to Natsuha the results are closer to a normal end. Not that there’s any problem with that; not every ending ever has to be perfectly happy.

After finishing the second route you enter directly into Natsuha route; and after going through the whole common route again, only this time through Natsuha’s perspective (whose few interesting insights are probably not worth the hours it takes to go through), you get to the main story, when this time Tooru takes a more balanced approach while at the same time caring more directly about Natsuha. And is in this route where you get all the answers; which are maybe a bit underwhelming, given that the whole game was centered in them. It can’t be said that the conclusion is not satisfying, but as a mystery, though there aren’t loose ties left over the whole thing lacks a certain depth. Taking the three routes as a whole, the overall impression is that, for the most part, the plot meanders without much course  (though again, the routes are enjoyable by themselves).

The story is thus serviceable but not particularly strong; other aspects fare better. The heroines are adorable, and the supporting cast is extensive; and the voice acting is strong, and there’s even a full voiced protagonist (though his seiyuu doesn’t do him many favors). The atmosphere is great: a rural setting that truly feels like so, the kind of places where you have to walk 20 miles in the snow uphill both ways to get anywhere (I lie; Monobeno is set in summer, so there’s no snow), and a rare example of a game set in Shikoku. The shinto and youkai aspects also shine, especially in Sumi route. As a whole, the “traditional Japanese village” atmosphere is strong and well crafted.

There’s also a ton of H content. Each route has around the standard three or four H scenes, but going through the game you unlock a fairly big number of additional scenes. There’s four unlocked with the prologue, four with each Sumi and Arisu routes, and eight with Natsuha’s (four of them with the side characters); and four more available as downloadable patches, and a disk with an additional fifteen (though three of them are the same, only differing in Natsuha’s tan). And the DLSite version of the game seems to have at least one additional scene. This method of having the H content as side scenes is neat, giving the option of playing (or obviating) them at one’s own leisure, and I wish more companies would take this approach. And though those 15 scenes of the extra disc are nothing special, their setting make together for a kind of short after story for each heroine, and Sumi’s one is particularly interesting (and seems to connect directly with the upcoming fandisc).

So. As a character based game this can disappoint, since even Sumi and Arisu routes are centered in Natsuha; and as a plot base game it’s far from memorable. But if you don’t mind having a bit of both then it’s good fun; and a better mix than, say, the August games, which usual approach is to have standard character routes that are completely detached from the plot. And there’s certainly enough eye candy to make the journey enjoyable. And, well, loli and/or imouto fans should certainly like this.