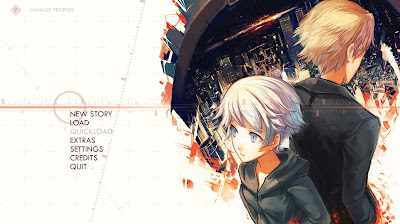 14 year old Winter Harrison is a student mediator from an advanced utopian world that has achieved the ability to travel to different worlds. Mediators are sent to these distant, chaotic worlds to help resolve conflicts, while keeping their true identities a secret, that threaten to unhinge the balance between chaos and order.
Winter is sent to the country of Brighton on the planet Sule to shadow a full fledged mediator named Cyrus for her second mediation. In Brighton low wages, hunger, death, suffering, and poverty are common place as people struggle just to survive. As Winter struggles to grasp and understand these concepts, her and her mentor Cyrus stumble upon a conflict greater than they ever anticipated that threatens to change the world of Sule. 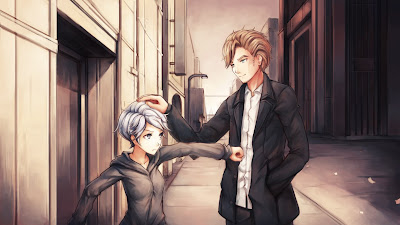 Not much else can be said about the overall story of Dysfunctional Systems without spoiling the game, since Brighton and a couple other countries on Sule make up pretty much the entire storyline of the first episode. I can however, talk about some of the themes presented.  One thing that really resonated with me was that you could tell a lot of Brighton’s issues were very similar to the economic problems that has been an issue in America the past few years, and makes me wonder if we ourselves are not going doing the path of Brighton.  In Brighton, people drop dead from starvation constantly, and minimum wage is so low that most people have to work 3-4 jobs just to barely make ends meet.  Brighton’s citizens consist mostly of manual/hard labor workers.  Putting a fresh faced character from a utopian society where such things don’t exist added an interesting factor to the story and perception of Brighton. 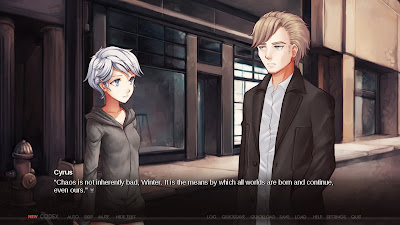 It’s also interesting that, as Cyrus explains it, mediators are not there to solve every problem and make the worlds perfect. They serve to reign in chaos and restore it back to balance with order, for in order for worlds to grow and thrive, chaos is necessary, but too much chaos can destroy. It’s a very true concept if you sit and think about it, as even stars and planets are born out of chaos. (If you don’t understand this concept, look up supernovas and the theory of supermassive black holes in correlation with galaxy creation)
The game also employs the use of a codex, which was a useful feature for the visual novel.  The game brought up several scientific terms and countries in the planet of Sule, and instead of bogging the story down with going in depth on these terms and explanations of the planet, or giving them a passing glance with a short explanation, these terms are put into your codex with further information (Generally about a page). I found this to be a nice idea, as I love details, but sometimes they can drag down the overall story.  The codex gave the best of both worlds; Details, without derailing from the main story.
Another feature is the “profile” feature.  After you get an ending, the game will ask you if you want to save it as a profile. (I did profiles for both endings)  This part isn’t explained too much, but it’s reasonable to assume that in Episode 2, the storyline will go based off of which profile from Episode 1 you load. 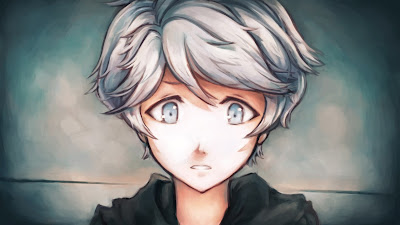 The art was top-notch, with only the hands being a slight bit awkward at times.  You can tell the artist put a lot of effort into everything from the characters clothing to the backgrounds; It’s all original, no stock photos just photoshopped a bit. The detail and color is exquisite, and the artist’s works look very much like paintings, complete with “brush stroke” patterns. The game features a ton of catchy and memorable tunes that fit the scenes perfectly and the game employs sound effects extremely well (a little too well in some places…*cough*). You can hear the creak of doors being opened, shoes walking on the floor, and even the sound of vomit (There’s that “too well”) The writing was also top-notch, meeting my expectations from Juniper’s Knot. 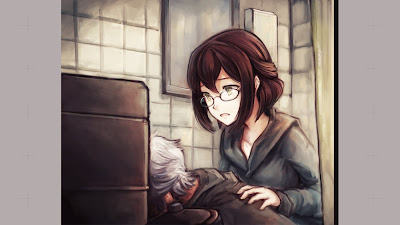 Winter Harrison is your rarely seen heroine, a strong, steadfast, and smart (If not a bit daft and naive) girl who is in touch with her moral ground and sticks to it. Winter knows what she wants and what she’s willing to do, and she will not compromise on it easily if she feels strongly enough about the sentiment.  Usually in most visual novels that have a female protagonist (Otome games in particular), the main character is usually a cookie cutter weakling who has no real personal opinions, can’t do anything for herself, and constantly needs a man to save her.  Winter is a nice step away from the “norm” of VN female protagonists. She is however a little -too- straight, but I feel after the events of episode one, she will become more apt to bending the rules a little bit.
Cyrus is her older mentor who takes mentoring Winter seriously, encouraging her to come up with her own thoughts and ideas on the situation at hand. He is however also a “battle-hardened” mediator, and has a bit of a notorious cold side as a result of many of the things he has seen in his years mediating. Cyrus is infamous among the mediators for taking drastic, sometimes violent, measures to achieve his goals on other worlds. Because of this, he tries to instill in Winter a sense that the rules are merely a guideline, and she must learn to bend and change them as the situation calls for every planet and situation.
Waverly is Winter’s roommate, and since she only showed up in the epilogue, not much is gleaned from her, but Waverly appears to be the kind, bookish type.  In one ending, she makes a lot of comments that well….Let’s just say that, even knowing this is an all ages visual novel, I really, really hope that sometime down the road Winter and Waverly get together.  Winter and Waverly didn’t have a lot of interaction, but there was some serious possible chemistry between them.  Maybe at the end of the series we’ll get an epilogue with them running off into the sunset together? =D 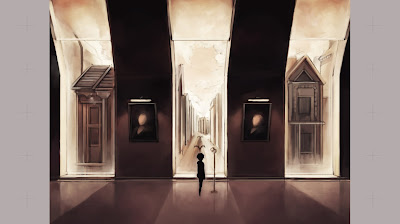 Dysfunctional systems features two endings.  Both are somewhat similar in nature, as the event/conflict outcome is the same in both endings, but are distinctly different in other ways that make it feel like the endings will branch further away from each other in the following episodes. (You can save your endings as “profiles” that will be loaded and used later on)  The major difference is the approach that is taken to the main events of the story, and the impact it has on Winter and Cyrus physically, mentally, and emotionally. Even sequences that seem alike have completely different dialogue based on the players choices making it feel like a sort of butterfly effect; Small things change so much that major events in the future may come out completely different. Both endings have their own bittersweet taste to them.
The endings were in my opinion a bit awkward and overly wordy.  I may be the only one, but I’m very picky about my endings. I like “episodic” shows/games to end on either a climax or a very, very short and to the point epilogue, while movies to have everything resolved and a little longer epilogue while being open enough if possible sequels are being planned. Dysfunctional System’s very name says that is an episodic visual novel, and so I expected it to have an ending befitting that.  However, the ending felt more like a movie ending.  That would have not even really bothered me so much, if for one simple fact; It felt like they created a lot of useless dialogue just to make the epilogue longer for whatever the reason was.  I think Waverly and Winter’s interaction was important, and I also feel Henry and Walter may play big parts in the upcoming epilogues, but the “random” visits by Irie and whatever the hell the guy’s name was just felt…pointless. The entire conversation consisted of pointless banter (that wasn’t funny) and them badgering Waverly to see Winter.  Again , useless, and the endings would have been so much better and felt less of a chore and drawn out if they had removed those “segments”. What’s worse is it’s in -both- endings, each with their own annoying, faceless nitwit.
The thing with episodic…anything is you need to keep the viewer enticed enough that they feel like they just have to know what happens, thus getting/watching the next episode. I’m still interested but sadly…The way those endings were handled killed my intrigue level.  I was at a “day one buy” for Episode 2, but now I’m at a “sometime”. The game was still amazingly great, I’m just very frugal with my money and time and so I have intensely high standards for day one buys, even if they’re cheap. Oh, and the “Opening” played pretty much at the end of the game, making it feel more like an ending/Episode one being a “prequel/intro”. 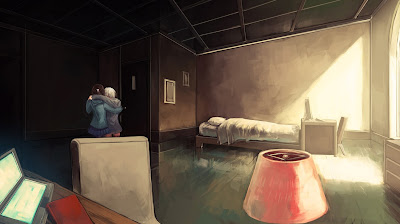 Even though Dysfunctional Systems had some flaws, for a short visual novel, it delivered an extremely good story and I am looking forward to the next Episode.  If you’re a fan of science fiction themes and just good stories overall, you should give DS a go.  For how cheap the game is, you get far more than you expect to; I know I did. If you’re looking for heavy Sci-fi themes though, like detailed spaceships, new technology everywhere, etc, then this story might not be for you.  At its heart, this game is more about the people and the conflict than it is about its sci-fi themes.
Final Score: 90%
Gorgeous and detailed artwork, including the backgrounds. Great music and use of sound effects and animation. Interesting characters that seem to have more to them than meets the eye. Good OP/ending movie. The codex was a nice addition to understanding more without making the actual story long-winded. Intriguing story that is well executed. Excellent bang for buck. Many themes seem to have traces of real life current events. The choices you make in the game/your ending will be carried on to subsequent episodes.
Cons:
Game is unvoiced.  While DS features an extensive soundtrack for such a small game and employs BGM frequently, many parts are dead silent due to this. Winter’s world is not really described in much detail, despite the fact that it plays a major part in the overall story of the game and is a major factor to Winter’s personality. Overdrawn endings.
Release Info:
Available in digital format and on the Steam platform in several languages, including English for PC, Mac, and Linux.
VN by Dischan
14+ Visual Novel
Purchase Dysfunctional Systems Ep. 1 in digital DRM free format or Steam edition.