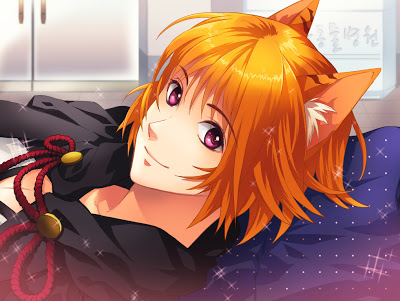 Ok, so I had to do a route review for Jiyeon, simply because this route makes me want to rant to high heaven. Jiyeon is one of the two cats in the group, the orange cat, and is the “goofy, happy go lucky” character out of the bunch. His route was honestly one of the routes I thought I’d enjoy the most, since I tend to like the goofball guys, but by the middle of his route I found myself cursing at him and the MC and wanting to smash my head against my desk with how much I started to hate his character. This review may contain spoilers, so read on at your own caution (Review contains spoilers, possibly major on his personality, about his storyline. Major spoilers, like his character ending and “tragic past” will be at the end, marked as major spoilers, for those who want to know)

Anyway, as I stated, Jiyeon is the silly, childish one of the group. As a cat, Jiyeon is always being cute with the main character Heejung, loves oranges, and oddly enough loves hopping in the bathtub with Heejung (Seriously, like 90% of the time his character was in the bathroom…