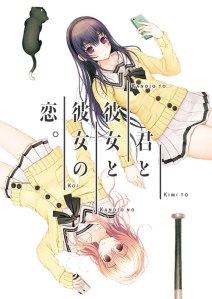 Kimi to Kanojo to Kanojo no Koi. (totono for short) is a 2013 Alternative Adventure game by Nitroplus.

Susuki Shin’ichi is an unremarkable student, “mob between mobs” in his own words. He’s childhood friends with school idol Sone Miyuki, but since some time ago there has been an increasing distance between them. It all starts changing though when they meet in the school rooftop, of which there’s a school legend that tells how if two persons kiss there they will be granted eternal love. They were called there by Shin’ichi’s friend Akebono Yuutarou (who occasionally consults him with concerns remarkable similar to those of a certain light novel protagonist), but whom they met is the denpa girl Mukou Aoi. She thinks reality is a game (an eroge, specifically), has a cellphone that supposedly can communicate with God and save and load, and has taken upon her the duty of making Shin’ichi enter Miyuki’s route. Also, Aoi is the spitting image of the heroine of a VN Yuutarou’s brother had, apparently a netorare hidden gem. Game which Aoi seems intent to replicate in the real world (because the alternative, that the game is predicting reality, is just too absurd).

And though Miyuki is not enthused at first, Shin’ichi manages to convince her to become friends with Aoi; besides her general weirdness, she seems to have issues with her family, and maybe they can help her have a more normal life. And Aoi thinks that becoming friends could be a good way to make Shin’ichi and Miyuki hook up. Thus the daily school life of the three of them begins.

Don’t read this review. Just go play the game, knowing nothing. Don’t use walkthroughs (which in any case don’t seem to exist yet and may not even be possible); just go in blind.

But let’s say you want to know a little more. Totono presents itself as a romance story, and at first it plays out like one. It follows a solid if somewhat conventional plot; the biggest pitfall could be the extreme hetare-ness of Shin’ichi, though that’s in itself part of the plot. But since early there are some signs that point to Aoi not being just a nutcase, and it’s clear there’s more going on than just a love triangle. And since even before the game was out there was some publicity that this could take a way more akin to things like School Days.

However, that last thing, that may seem like Nitroplus spoiling its own work, is not the real meat of the game. And once it shows its true colors it becomes something totally unlike anything you’ve played. In content is in a way a “meta” eroge, a commentary on the usual romance VNs. By plot, also helped by aesthetics; a subdued palette, designs, and overall tone generate a more realistic atmosphere that makes things that would seem quirky or moe in other games feel just unsettling. And in form it’s also something new, that goes against the usual expectations and standards of the genre and even medium, and also in this way it works as a commentary on VNs. You have to throw out your common sense when playing this, because it follows different rules. Even the package is unconventional, and actually part of the experience.

Sometimes it’s said as a compliment that a certain VN could perfectly be a novel, or one can think that another VN could be an awesome anime. In this case, this could be nothing but a game. Like very few other things, it takes advantage of its medium, and does so to an extreme I haven’t seen anywhere else. Breaking the usual rules, it shows what a VN is really capable of doing.

By itself that would be a cool gimmick, and if there were to be nothing to this but that it would be an interesting game, a fascinating example of what can be done in the medium. But this gimmick is not the only thing totono has going for; it’s supported by the story, which is what gives meaning to the gimmick, and which in turn really gets to shine thanks to it. By itself, even ignoring all the meta content, it would be a cool denpa-ish story. A solid story, with no waste: the cast is small, but maybe thanks to that the characters are pretty developed, and all of them play an important role; the pace is a bit slow at the beginning, but even that more conventional part has a meaning; there are some neat twists, major and minor; and even things that seem just a minor joke turn out to be relevant later. This is a game that rewards paying attention (and you do need to pay attention to go through a certain scene).

But more than all that, here form and content go hand in hand and support each other, giving the game a greater impact. And by doing so it also involves the player themselves. You may get “involved” in a good story, and feel for the characters, and even drop a tear for them in particularly touching scenes; and in VNs with gameplay it may seem that you are not just following a script but taking active part in its development. However, this game goes a step beyond and truly involves the player, in the sense of making them part of the story, another one of the actors, in the same category as any of the main characters. By the end you’ll feel like you were really part of the game all along.

And even through all of this, totono never forgets that it’s first and foremost a romance story. It’s love what sets everything in motion, and it’s love what then ends everything. Alternative Adventure, it’s the official genre; and here Alternative means an alternative between two choices. Breaking the most fundamental rule of the genre, you can only choose one of the girls. And the game will tell you why is it that way, and it will convince you, showing the degree to which it managed to get you involved.

So, there’s a lot going on here, especially considering the short length. Which may be the biggest con; 10-15 hours may be a bit too little for a full priced game. If you want volume, you won’t find it here. But in quality those 10-15 hours are worth every cent. You can take this as a romance story, as a bizarre denpa like story, as a commentary on eroge, or as an essay in what the medium can do; it’s all of that, and all those aspect reinforce each other. And as a meta eroge, it will touch upon questions you may already have formulated in some corner of your mind. At the very least, it should help you see the usual romance VNs upon a different light from now on. If you habitually play conventional romance stories, this should help to gain a new perspective on the genre. And even if nothing of that ends up happening, you have at the very least an interesting plot. Whatever you end up taking out of this, it should be a great experience.