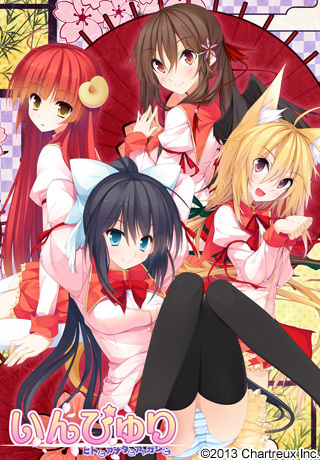 Time to once again try my luck with a youkai chara-ge! Will it end better than the last time around? (Spoiler: it won’t.)

Inpyuri -Hito to Anata to Ayakashi to- is a 2013 game by Rosebleu.

Strange other-worldly beings known as youkai have existed in Japan since ancient times. Not too far in the future, humans lived together with youkai harmoniously and studied their mysterious abilities. Kazuto lived in the research city of Byakuya-jima and had grown up with youkai by his side. Following his motto of enjoying every moment of life, he enrolled in Shiramine Gakuen with his osananajimi Shizune. However, on the day of the entrance ceremony, he reunited with a girl who he used to play with and who had saved his life: the oni girl Miyabi. That spelled the end of his normal days as many other youkai and humans flocked to his side.

The main flaw this game has is its genericness. Especially in the common trunk, everything you read you have already read elsewhere, multiple times. And a few times it becomes particularly groan worthy (I may have actually shouted at the screen a couple of times). Every character, situation, dialogue, are all tropes endlessly used before. (Having played this alongside Saihate no Ima may have affected my perception. )

But outside that, there aren’t really any fatal flaws here (there are though several lesser flaws). The common trunk is still fun enough (or at least not boring) to read, and a certain scene (the one with the kamaitachi) has some of the best comedy I’ve read recently (sadly this never manages to reach those levels again). Inpyuri uses the standard system of a common trunk followed by the characters routes, which is where the drama is. Again, those routes are not very original, but they’re at least fun enough (“fun enough” may actually be used to describe the whole game), and don’t clash between them. Not too much, at least; but would amount to the plot of this game is only touched upon in the Miyabi and Shizune routes, and completely ignored in the Mikoto and Asuka ones, which focus exclusively in their own personal problems.

So Miyabi and Shizune routes provide the plot. A high density of icha icha between the confession and the conclusion breaks a little the pace, but the plot itself has a good rhythm, slowly building until the reveal and climax, where the loose ends are tied. Originality is still a problem; To aru Kagaku no Railgun already used a very similar story. And there’s an extreme overlap between these two routes, being almost the same story with a different girl; this means there are no contradictions, but also that after playing one the other adds very little, and even becomes less enjoyable, since there’s no mystery or tension or anything.

The other two routes are much more character centric. Which wouldn’t necessarily be bad, but the problems the couple face are very conventional and mundane, which considering the setting is certainly flaw. They are outwardly rooted in the youkai origin of the girls, but only outwardly; family problems and doubts on the own potential don’t really need a youkai background.

Generic pic with the remaining heroines

There’s also the theme of the volume; or rather of the lack of it. The common trunk has an average length, but the four routes are all fairly short, so the game can be finished in a couple of days. It doesn’t fell rushed, but it may be felt like lacking in substance.

The system is very bare bones, and that may even be generous. Customization is minimal, and there’s no handy way to save and load.

If there’s a single point that saves this game is the cast. The characters may not be the most original bunch, but they are all fun, as are their interactions, and the heroines are all utterly, completely adorable. A truly excellent voice acting helps them stand even higher (I may have fallen in love with Hokuto Minami’s voice). And this includes the protagonist (well, not the voice acting part); once the story gets going you really see how hilarious he is. Proactive and smart, he’s basically as far as you can get from the universally reviled hetare protagonist.

As mentioned above, all this can be summed up as “fun enough”. There’s an absolute underutilization of the setting; if you are especially interested in youkai, or in Japanese mythology, you’ll be disappointed (if you only care for the monster girl aspect you may be more hooked). And there aren’t big surprises or anything groundbreaking here. But as a chara-ge with a semblance of plot it gets passing marks. If you want a short, brainless fun you can do way worse.